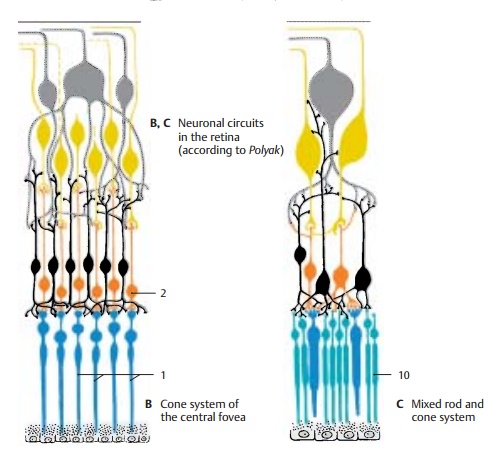 The retina consists of two layers, namely, the outer pigmented layer and the inner neurallayer . The two layersfirmly adhere to each other only in the regions of papilla and oraserrata.

The retina consists of two layers, namely, the outer pigmented layer and the inner neurallayer . The two layersfirmly adhere to each other only in the regions of papilla and oraserrata.

The neural layer contains three layers of cells. Adjacent to the pigmented epithelium (AB1) lies the neuroepithelial layer of the ret-ina, the layer of photoreceptors. Next fol-lows the ganglionic layer of the retina, a layer of bipolar neurons. Last comes the gan-glionic layer of the optic nerve, a layer of mul-tipolar neurons; their axons form the optic nerve. Thus, the sensory cells of the retina do not face the incoming light with their re-ceptor parts; rather, they turn away from the light and are covered by neurons and nerve fibers. This reverse order is known as inversion of the retina. The inner surface ofthe retina is separated from the vitreous body by a basement membrane, the internallimiting membrane (B2). A glial membrane,the external limiting membrane (B3), sepa-rates the receptor parts of the sensory cells from the rest of the neural epithelium. Be-tween both membranes expand elongated supporting glial cells of Müller (B4) withtheir leaf-like processes.

Neuroepithelial layer (AB5). The neural epithelium contains two different types ofphotoreceptor cells, the retinal rods (B6) and cones (B7). The rod cells are for light–darkperception in dim light (night vision), while the cone cells are responsible for color per-ception in bright light (color vision) and visual acuity (duplicity theory). The cell nu-clei of the photoreceptors form the externalnuclear layer (A8). The rods and cones reston the pigmented epithelium and do not function without contacting with the pig-mented epithelium. The photoreceptors represent the 1st neuron of the visual path-way. 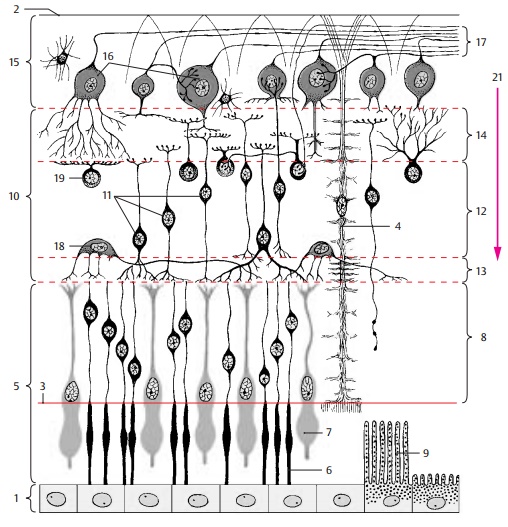 In lower vertebrates, the pigmented epithelium has a brush border of microvilli (B9) that reach between the rods and cones.

Ganglionic layer of the retina (AB10). Thislayer consists of bipolar neurons (B11) (2nd neuron). Their dendrites extend to the sensory cells and contact the synaptic ter-minals of the photoreceptors. Their axons have contact with the large neurons of the ganglionic layer of the optic nerve. The cell nuclei of the bipolar neurons form the innernuclear layer (AB12). Their synapses lie inthe outer plexiform layer (AB13) and innerplexiform layer(AB14).

The uppermost cell layer consists of a row of large multipolar neurons (B16) (3rd neuron); their short dendrites form synapses in the inner plexiform layer with the axons of the bipolar neurons. Their axons extend as un-myelinated fibers in the layer of nerve fibers (AB17) to the papilla of the optic nerve (blind spot). They form the optic nerve and terminate in the lateral geniculate body.

A21 Direction of incoming light.

Regional Structures of the Retina

The retina is divided into three parts:

!   The optic part of the retina  covers the fundus of the eye and contains the light-sensitive sensory cells (photore-ceptors).

! The ciliary part of the retina  lies below the ciliary body and is separated from the optic part by the oraserrata.

! The iridial part of the retina covers the posterior surface of the iris.

Neither the ciliary part nor the iridialpart contain sensory cells; they consist only of a double-layered pigmented epithelium. They are therefore collectively known as the blind part of retina.

The human retina contains approximately 120 million rod cells and 6 million cone cells. Their distributions vary regionally. The rod-to-cone ratio in the vicinity of the cen-tral fovea is 2:1. The portion of cones decreases toward the periphery, and the lateral region of the retina is dominated by rods.

Macula and central fovea.The macula luteadoes not contain any rods but only cones, and the unusually long and narrow shape of its cones (AB1) differs from the usual struc-ture of cones. The ganglionic layer of the ret-ina and the ganglionic layer of the optic nerve are relatively thick in the macula, but they diminish in the region of the central fovea, leaving only a thin tissue layer on top of the cone cells. Thus, the incoming light has immediate access to the photoreceptors in the fovea. Macula and fovea are the areasof highest visual acuity. This is not only dueto the absence of the upper retinal layers but also to special neuronal circuits.

Each cone in the central fovea is connected with a single bipolar neuron (B2). Each bipolar neuron in the region around the fovea (perifovea) synapses with six cone cells. Such convergence is even more pronounced at the periphery of the retina

Here a single optic nerve neuron may receive input from over 500 receptors. A total of only one million of optic nerve fibers correspond to 130 million photoreceptors.A circumscribed fiber bundle, the papil-lomacular bundle, extends from the neuronsof the macula to the papilla.

The retina is an extremely complex relay system. The eye is not just a sensory organ transmitting light impulses. Rather, these impulses already undergo processing in the retina. Electrophysiological studies have shown that groups of sensory cells are com-bined to receptive fields and react as functional units. A receptive field is formed by the dendritic tree of a large optic nerve ganglion cell and the dendrites of the amacrine interneurons in the inner plexi-form layer. Stimulation of a receptive field inhibits neurons in the vicinity. This inhibi-tion is made possible by the transverse con-nections of the horizontal interneurons in the outer plexiform layer.