Tissue repair is the substitution of viable cells for dead cells.Tissue repair can occur by regeneration or by fibrosis. In regen-eration,the new cells are the same type as those that weredestroyed, and normal function is usually restored. In fibrosis, or replacement, a new type of tissue develops that eventually causes scar production and the loss of some tissue function. The tissues involved and the severity of the wound determine the type of tissue repair that dominates.

Regeneration can completely repair some tissues, such as theskin and the mucous membrane of the intestine. In these cases, regeneration is accomplished primarily by stem cells. Stem cells are self-renewing, undifferentiated cells that continue to divide throughout life. With each division, there is a daughter stem cell and a second cell that can undergo differentiation. The differenti-ated cells are the same cell types as the dead cells. Regeneration can also involve division of differentiated cells in connective tissue and glands, such as the liver and pancreas. These cells do not normally divide, but retain the ability to divide after an injury.

Fibrosis is the predominant repair mechanism in some tissues. In the adult brain, heart, and skeletal muscle there are \relatively few stem cells and the mature neurons, cardiac muscle, and skeletal muscle do not divide. While these cells cannot divide, they can recover from a limited amount of damage. For example, if the axon of a neuron is damaged, the neuron can grow a new axon, but it will die if the cell body is sufficiently damaged. If these cells are killed, they are often replaced by connective tissue.

Although neurons cannot form additional neurons, a small population of stem cells has been found in the adult brain. These stem cells can divide and form new neurons. It may be possible to develop treatments for some brain injuries that stimulate the stem cells. Researchers have identified a class of chemicals, called growth factors,\ that stimulate stem cells to divide and make injured \neurons recover more rapidly. The new neurons may be incorporated with other functional neurons of the central nervous system.

In addition to the type of cells involved, the severity of an injury can influence whether repair is by regeneration or fibrosis. Generally, the more severe the injury, the greater the likelihood that repair involves fibrosis.

Repair of the skin is an illustration of tissue repair (figure 4.7).When the edges of a wound are close together, the wound fills with blood, and a clot forms . The clot contains the thread-like protein fibrin, which binds the edges of the wound togetherand stops the bleeding. The surface of the clot dries to form a scab, which seals the wound and helps prevent infection.

An inflammatory response is activated to fight infectious agents in the wound and to help the repair process (see figure 4.6). Dilation of blood vessels brings blood cells and other substances to the injury area, and increased blood vessel permeability allows them to enter the tissue. The area is “walled off” by the fibrin, and neutrophils enter the tissue from the blood. 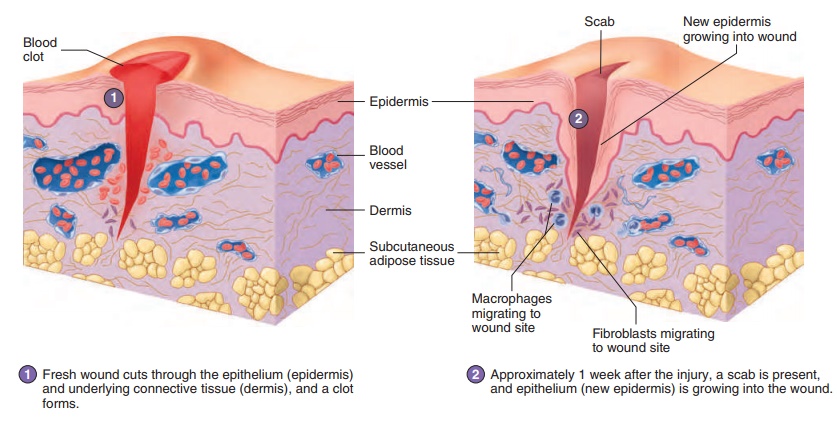 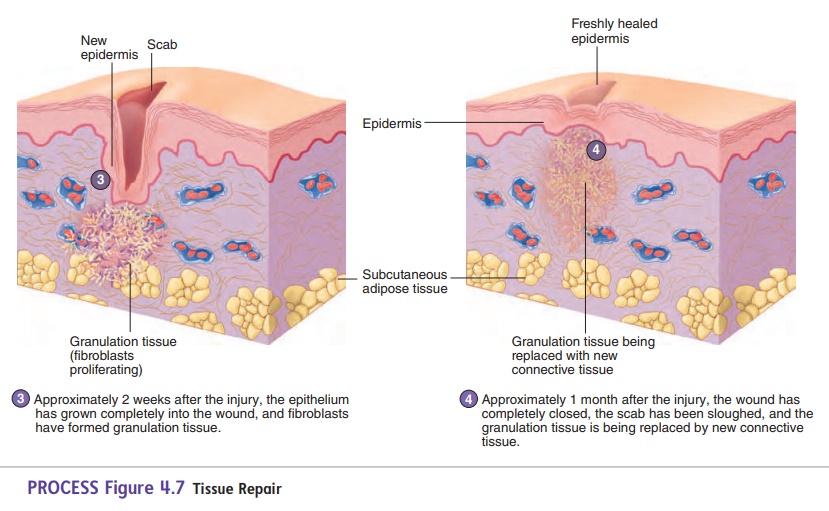 A second type of phagocytic cell, called a macrophage, removes the dead neutrophils, cellular debris, and the decom-posing clot. Fibroblasts from the surrounding connective tissue migrate into the area, producing collagen and other extracellular matrix components. Capillaries grow from blood vessels at the edge of the wound and revascularize the area. The result is fibro-sis, during which the clot is replaced with granulation tissue, a delicate, granular-appearing connective tissue that consists of fibroblasts, collagen, and capillaries. Eventually, normal connec-tive tissue replaces the granulation tissue. Sometimes a large amount of granulation tissue persists as a scar, which at first is bright red because numerous blood vessels are present. The scar turns from red to white as collagen accumulates and the blood vessels decrease in number. 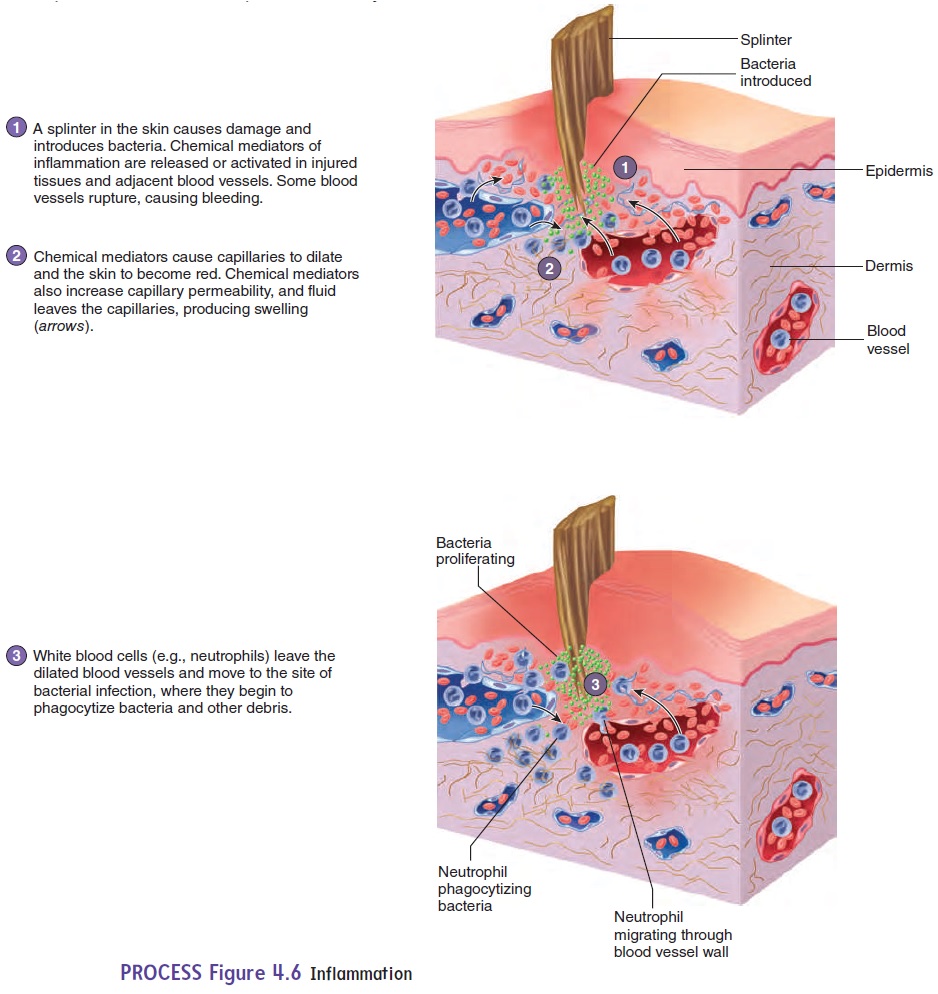 When the wound edges are far apart, the clot may not com-pletely close the gap, and it takes much longer for the epithelial cells to regenerate and cover the wound. With increased tissue damage, the degree of inflammation is greater, there is more cell debris for the phagocytes to remove, and the risk of infection increases. Much more granulation tissue forms, and woundcontracture, a result of the contraction of fibroblasts in thegranulation tissue, pulls the edges of the wound closer together. Although wound contracture reduces the size of the wound and speeds healing, it can lead to disfiguring and debilitating scars.