Chapter: Essentials of Anatomy and Physiology: Tissues and Membranes

Nerve tissue consists of nerve cells called neurons and some specialized cells found only in the nervous system. 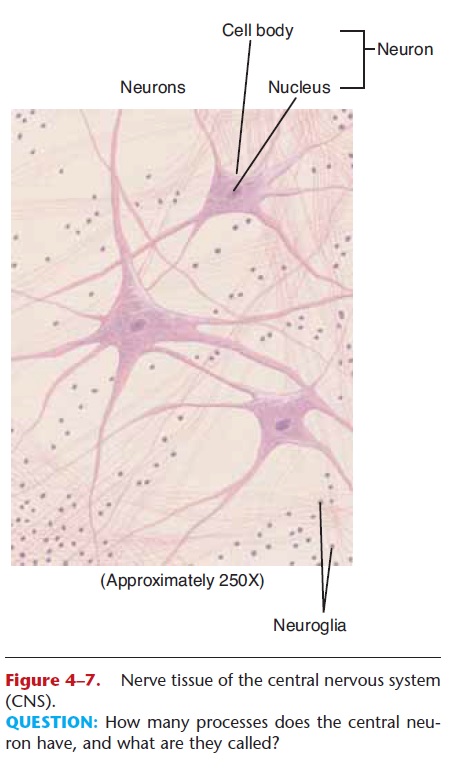 QUESTION: How many processes does the central neu-ron have, and what are they called?

Neurons are capable of generating and transmit-ting electrochemical impulses. There are many differ-ent kinds of neurons, but they all have the same basic structure (Fig. 4–7). The cell body contains the nucleus and is essential for the continuing life of the neuron. An axon is a process (the term “process” here means “something that sticks out,” a cellular exten-sion) that carries impulses away from the cell body; a neuron has only one axon. Dendrites are processes that carry impulses toward the cell body; a neuron may have several dendrites. A nerve impulse travels along the cell membrane of a neuron, and is electrical, but where neurons meet there is a small space called a synapse, which an electrical impulse cannot cross. At a synapse, between the axon of one neuron and the dendrite or cell body of the next neuron, impulse transmission depends upon chemicals called neuro-transmitters. A summary of nerve tissue is found in Table 4–4.

Nerve tissue makes up the brain, spinal cord, and peripheral nerves. As you can imagine, each of these organs has very specific functions. For now, we will just mention the categories of the functions of nerve tissue. These include feeling and interpreting sensa-tion, initiation of movement, the rapid regulation of body functions such as heart rate and breathing, and the organization of information for learning and memory.