Epithelia are classified according to the number of cell layers and the shape of the cells (table 4.1). Simple epithelium consists of a single layer of cells.

Epithelia are classified according to the number of cell layers and the shape of the cells (table 4.1). Simple epithelium consists of a single layer of cells. Stratified epithelium consists of more than one layer of epithelial cells, with some cells sitting on top of others. Categories of epithelium based on cell shape are squamous (skwā′\mŭs; flat), cuboidal (cubelike), and columnar (tall and thin). In most cases, each epithelium is given two names, such as simple squamous, simple columnar, or stratified squamous epithelium. When epithelium is stratified, it is named according to the shape of the cells at the free surface. 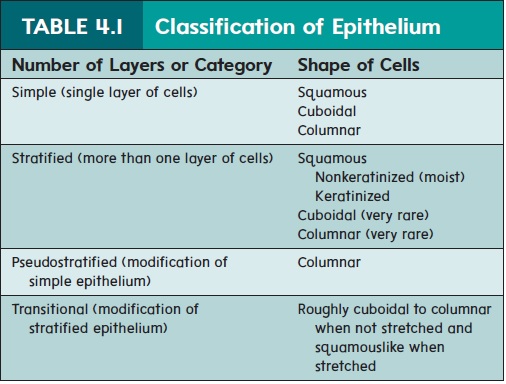 Simple squamous epithelium is a single layer of thin, flat cells (table 4.2a). Some substances easily pass through this thin layer of cells, but other substances do not. For example, the air-ways end as small sacs called alveoli (al-vē′\o-lı̄; sing. alveolus, hollow sac). The alveoli consist of simple squamous \epithelium that allows oxygen from the air to diffuse into the body and carbon dioxide to diffuse out of the body into the air. Simple squamous epithelium in the filtration membranes of the kidneys forms thin barriers through which small molecules, but not large ones, can pass. 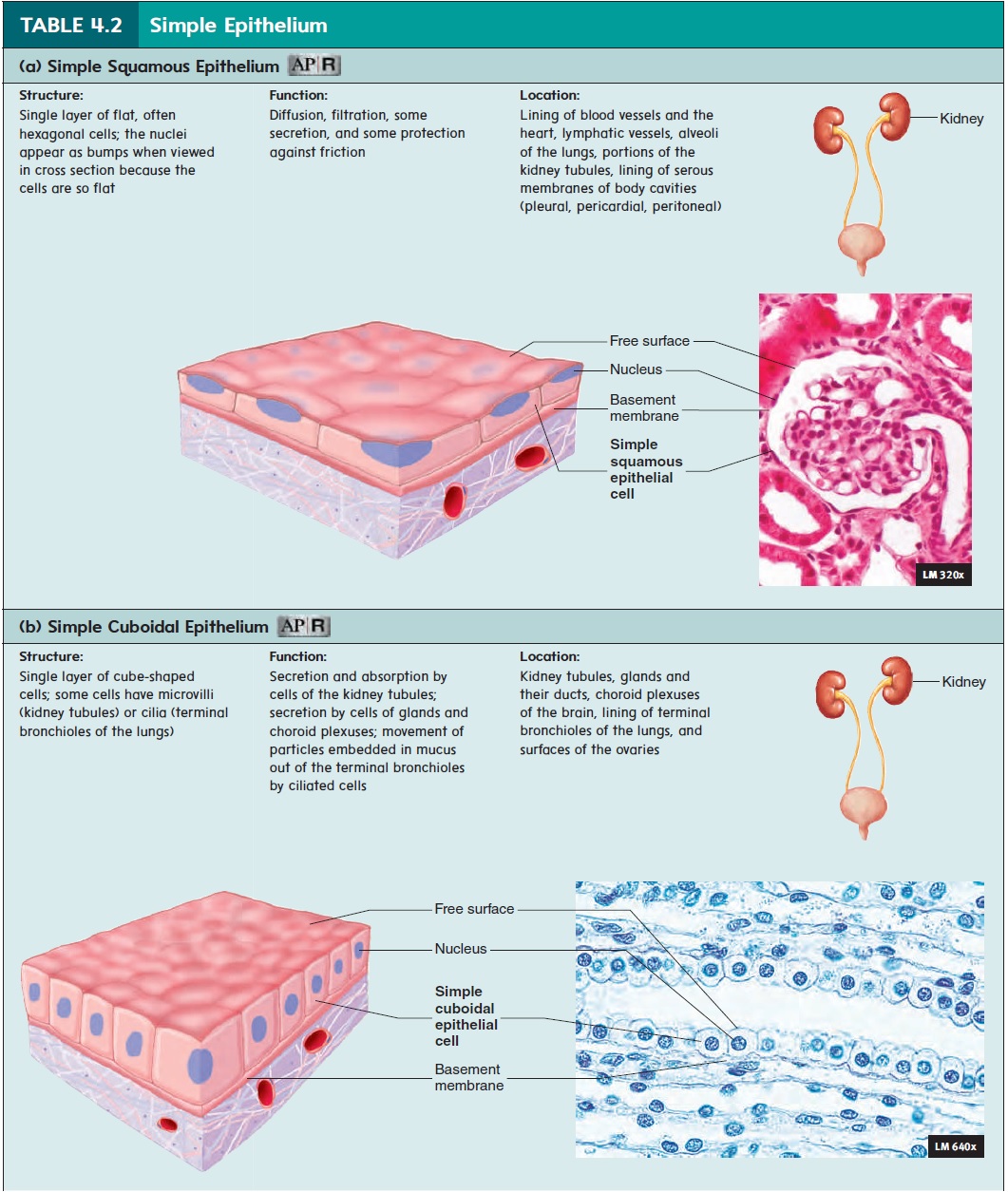 Small molecules, including water from blood, are filtered through these barriers as a major step in urine formation. Large molecules, such as proteins, and blood cells remain in the blood vessels of the kidneys.

Simple cuboidal epithelium is a single layer of cubelikecells (table 4.2b) that carry out active transport, facilitated dif-fusion, or secretion. Epithelial cells that secrete molecules such as proteins contain organelles that synthesize them. These cells have a greater volume than simple squamous epithelial cells and contain more cell organelles. The kidney tubules have large portions of their walls composed of simple cuboidal epithelium. These cells secrete waste products into the tubules and reabsorb useful materials from the tubules as urine is formed. Some cuboidal epithelial cells have cilia that move mucus over the free surface or microvilli that increase the surface area for secretion and absorption.

Simple columnar epithelium is a single layer of tall, thin cells (table 4.2c). These large cells contain organelles that enable them to perform complex functions. For example, the simplecolumnar epithelium of the small intestine produces and secretes mucus and digestive enzymes. Mucus (mū′\kŭs) is a clear, viscous (thick) fluid. The mucus protects the lining of the intestine, and the digestiveenzymes complete the process of digesting food. The columnar cells then absorb the digested foods by active transport,facilitated diffusion, or simple diffusion.

Stratified squamous epithelium forms a thick epithelium because it consists of several layers of cells (table 4.3a). The deepest cells are cuboidal or columnar and are capable of dividing and producing new cells. As these newly formed cells are pushed to the surface, they become flat and thin. As the cells flatten, the cyto-plasm of the epithelial cells is replaced by a protein called keratin, and the cells die. One type of stratified squamous epithelium forms the outer layer of the skin and is called keratinized squa-mous epithelium . The dead cells provide protection against abrasion, and form a barrier that prevents microorganisms and toxic chemicals from entering the body, and reduces the loss of water from the body. If cells at the surface are damaged or rubbed away, they are replaced by cells formed in the deeper layers. 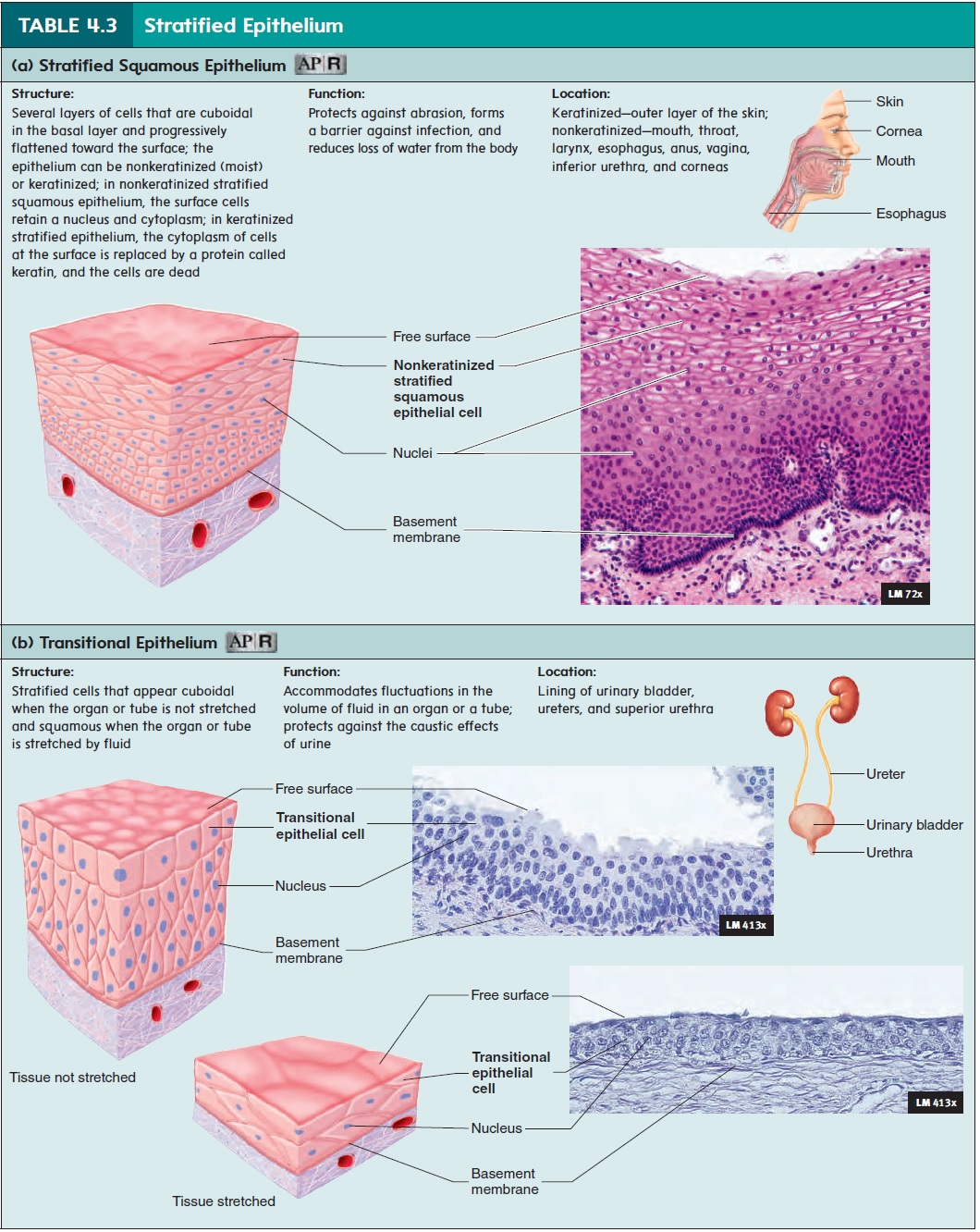 Stratified cuboidal epithelium consists of more than onelayer of cuboidal epithelial cells. This epithelial type is relatively rare and is found in sweat gland ducts, ovarian follicular cells, and the salivary glands. It functions in absorption, secretion, and protection.