An interesting and useful feature offered by java.util is the ability to schedule a task for execution at some future time.

An interesting and useful feature offered by java.util is the ability to schedule a task for execution at some future time. The classes that support this are Timer and TimerTask. Using these classes, you can create a thread that runs in the background, waiting for a specific time. When the time arrives, the task linked to that thread is executed. Various options allow you to schedule a task for repeated execution, and to schedule a task to run on a specific date. Although it was always possible to manually create a task that would be executed at a specific time using the Thread class, Timer and TimerTask greatly simplify this process.

TimerTask implements the Runnable interface; thus, it can be used to create a thread of execution. Its constructor is shown here:

TimerTask defines the methods shown in Table 19-9. Notice that run( ) is abstract, which means that it must be overridden. The run( ) method, defined by the Runnable interface, contains the code that will be executed. Thus, the easiest way to create a timer task is to extend TimerTask and override run( ).

Once a task has been created, it is scheduled for execution by an object of type Timer. The constructors for Timer are shown here:

The first version creates a Timer object that runs as a normal thread. The second uses a daemon thread if DThread is true. A daemon thread will execute only as long as the rest of the program continues to execute. The third and fourth constructors allow you to specify a name for the Timer thread. The methods defined by Timer are shown in Table 19-9.

Once a Timer has been created, you will schedule a task by calling schedule( ) on the Timer that you created. As Table 19-10 shows, there are several forms of schedule( ) which allow you to schedule tasks in a variety of ways. 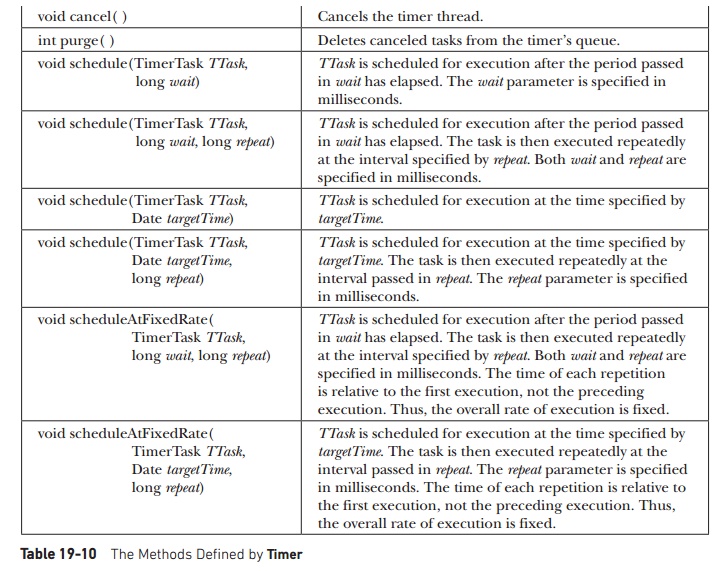 The following program demonstrates Timer and TimerTask. It defines a timer task whose run( ) method displays the message "Timer task executed." This task is scheduled to run once every half second after an initial delay of one second.

/* Set an initial delay of 1 second, then repeat every half second.