Three domain classification was proposed by Carl Woese (1977) and his co--workers. They classified organisms based on the difference in 16S rRNA genes. The three domain system adds the taxon ‘domain’ higher than the kingdom. This system emphasizes the separation of Prokaryotes into two domains, Bacteria and Arachaea, and all the eukaryotes are placed into the domain Eukarya. Archaea appears to have more in common with the Eukarya than the Bacteria. Archaea differ from bacteria in cell wall composition and differs from bacteria and eukaryotes in membrane composition and rRNA types.

This domain includes single celled organisms, the prokaryotes which have the ability to grow in extreme conditions like volcano vents, hot springs and polar ice caps, hence are also called extremophiles. They are capable of synthesizing their food without sunlight and oxygen by utilizing hydrogen sulphide and other chemicals from the volcanic vents. Some of the them produced methane (methanogens), few live in salty environments (Halophiles) and are thermoacidophiles which thrive in acidic environments and at high temperatures.

Bacteria are prokaryotic, their cells have no definite nucleus and DNA exists as a circular chromosomes and do not have histones associated with it. They do not possess membrane bound organelles except for ribosome (70S type). Their cell wall contains peptidoglycans. Many are decomposers, some are photo-synthesizers and few cause diseases. There are beneficial probiotic bacteria and harmful pathogenic bacteria which are diversely populated. Cyanobacteria are photosynthetic blue green algae which produce oxygen. These had played a key role in the changes of atmospheric oxygen levels from anaerobic to aerobic during the early geologic periods.

Eukaryotes are animals which have true nucleus and membrane bound organelles. DNA in the nucleus is arranged as a linear chromosome with histone proteins, ribsosomes of 80S type in the cytosol and 70S type in the chloroplast and mitochondria. Animals in this domain are classified under kingdoms, namely, Protista, Fungi, Plantae and Animalia.

In 1987, Cavalier-Smith revised the six kingdom system to Seven Kingdom system. The concept of super kingdom was introduced and revised to seven kingdom classification. 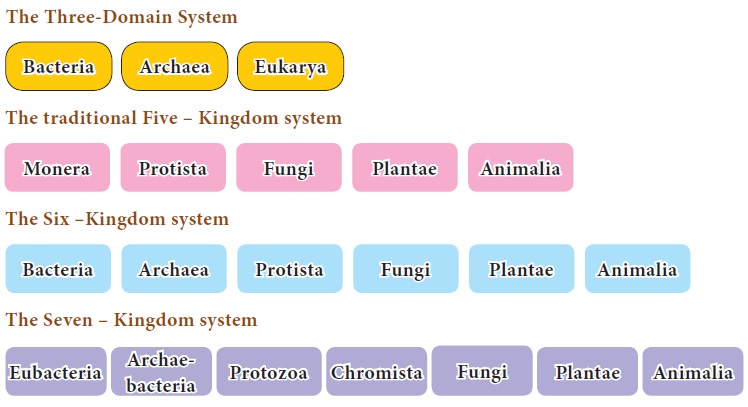