Taxonomy (G. taxis- arrangement ; nomos-law) is the science of arrangement of living organisms along with classification, description, identification, and naming of organisms which includes all flora and fauna including microorganisms of the world.

Taxonomy (G. taxis- arrangement ; nomos-law) is the science of arrangement of living organisms along with classification, description, identification, and naming of organisms which includes all flora and fauna including microorganisms of the world. The word taxonomy was coined by Augustin Pyramus de Candole (1813). Taxonomy is a theoretical study of classification with well defined principles, rules and procedures. Aristotle is called the father of taxonomy (classical) and Carolus Linnaeus is the father of modern taxonomy.

The objectives of taxonomy and systematics are very similar; their goal is to classify organisms with stipulated rules. The main criteria of systematics is identifying, -describing, naming, arranging, preserving and documenting the organisms. Apart from the above said features, evolutionary history of the species and the environmental adaptations and interrelationship between species are also being investigated in systematics.

Early classification of organisms were based on only two criteria, beneficial or harmful animals. An ancient classification system recognized 5 animal groups - domestic, wild, creeping, flying and sea animals. Initially the classification was based on organism’s fundamental characteristics such as the habitat and morphology only.

Aristotle (384 to 322 BC), was the first to classify all animals in his History of Animals (Historia Animalium in Latin). He attempted a basic classification of all living organisms into Plants and Animals. Animals were classified based on locomotion; walking (terrestrial), flying (aerial) and swimming (aquatic). Based on the presence or absence of red blood he classified the animals into two as Enaima with blood and those without blood as Anaima.

Aristotle’s classification system had limitations and many organisms were not fitting into his classification. For example, the tadpoles of frogs are born in water and have gills but when they metamorphosed into adult frogs they have lungs and can live both in water and on land. How to classify frogs and where to place them? Aristotle classified organisms based on locomotion, hence, birds, bats, and flying insects were grouped together just by observing one single characteristic feature, the flying ability. On the contrary to the above said example, the ostrich, emu and penguin are all birds but cannot fly. So Aristotle would not have classified them as birds. In spite of these limitations Aristotle’s classification system was followed for more than 2000 years upto 1700.

After Aristotle, his student Theophrastus (372-287 BC) continued his research on the classification of plants, and he was known as the “Father of Botany.” There was a huge gap till 16th century, then the English naturalist John Ray (1627–1705) wrote several important works through his life. His most important contribution was the establishment of species as the ultimate unit of taxonomy. In 1682 he published the Methodus Plantarum Nova, which contained about 18,000 plant species, a result of a relatively narrow species concept. His complicated classification was based on many combined characters, as opposed to earlier taxonomists. John Ray also aimed at publishing a complete system of nature, which included works on mammals, reptiles, birds, fishes and insects. The Swedish biologist Carolus Linnaeus (1707 - 1788) father of modern taxonomy and founder of modern systematics developed a scientific system of taxonomy and binomial nomenclature, which is still (with modifications) in use.

Aristotle to Linnaeus employed easily observable single to few traits for classificatio1n of organisms. With increased knowledge of the several biological domains, many characters were considered for classifying organisms. This represented the phase of classical taxonomy which was based on overall similarities or affinities derived from morphology, anatomy and embryology of organisms. A modification of this system is the numerical taxonomy, which evolved in the 1950s. This system evaluates the resemblances and differences through statistical methods followed by computer analyses to establish the numerical degree of relationship among individuals. Later on biologists initiated studies on the evolutionary and genetic relationships among organisms, which led to the emerge of phylogenetic classification or cladistics-. It is an evolutionary classification based on how a common ancestry was shared. Cladistic classification -summarizes the genetic differences between all species in the ‘phylogenetic tree’. Ernst Haeckal introduced the method of representing evolutionary relationships with the help of a tree diagram known as cladogram. 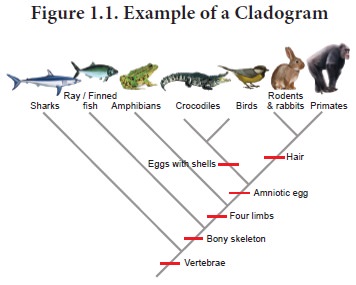 Arranging organisms on the basis of their similar or derived characters which differ from the ancestral characters produced a phylogenetic tree or cladogram (Figure 1.1).

Depending on the system of classification, organisms were classified into two or three kingdoms. Later into four, five, six and now into seven kingdoms. R.H.Whittaker (1969) proposed the Five kingdom Classification, the Kingdoms defined by him were Monera, Protista, Fungi, Plantae, and Animalia based on the cell structure, mode of nutrition, mode of reproduction and phylogenetic relationships. Table 1. gives a comparative account of different characteristics of the five kingdoms.