A change in temperature causes the electrical resistance of a material to change.

·        A change in temperature causes the electrical resistance of a material to change.

·        The resistance change is measured to infer the temperature change.

·        There are two types of thermoresistive measuring devices: resistance temperature detectors and thermistors, both of which are described here.

A resistance temperature detector (abbreviated RTD) is basically either a long, small diameter metal wire (usually platinum) wound in a coil or an etched grid on a substrate, much like a strain gauge. 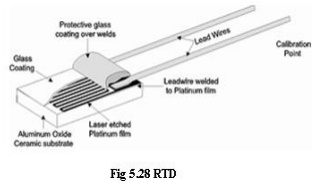 Rlead represents the resistance of one of the wires (called lead wires) that run from the bridge to the RTD itself. Lead resistance is of little concern in strain gage circuits because Rlead remains constant at all times, and we can simply adjust one of the other resistors to zero the bridge.

A thermistor is similar to an RTD, but a semiconductor material is used instead of a metal. A thermistor is a solid state device. Resistance thermometry may be performed using thermistors. Thermistors are many t useful over limited ranges of temperature. They are small pieces of ceramic material made by sintering mixtures of metallic oxides of Manganese, Nickel, Cobalt, Copper and Iron etc. 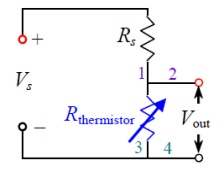