In prony brake, mechanical energy is converted into heat through dry friction between the wooden brake blocks and the flywheel (pulley) of the machine. One block carries a lever arm. An arrangement is provided to tighten the rope which is connected to the arm. Rope is tightened so as to increase the frictional resistance between the blocks and the pulley. 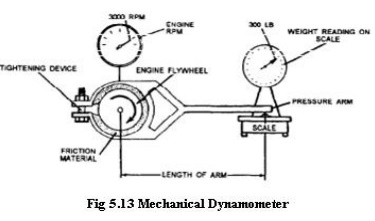 The capacity of proney brake is limited due to wear of wooden blocks, friction coefficient varies. So, it is unsuitable for large powers when it is used for long periods.

Basically an electrical dynamometer of absorption type, used to measure power from a source such as engine or a motor. When a conducting material moves through a magnetic flux field, voltage is generated, which causes current to flow. If the conductor is a wire forming, a part of a complete circuit current will be caused to flow through that circuit and with some form of commutating device a form of A.C or D.C generator may result. 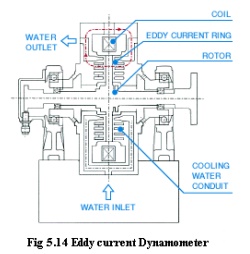 An eddy current dynamometer is shown above. It consists of a metal disc or wheel which is rotated in the flux of a magnetic field. The field if produced by field elements or coils is excited by an external source and attached to the dynamometer housing which is mounted in trunnion bearings. As the disc turns, eddy currents are generated. Its reaction with the magnetic field tends to rotate the complete housing in the trunnion bearings. Water cooling is employed.

A rotating disk that is fixed to the driving shaft, Semi-elliptical grooves are provided on the disc through which a stream of water flows. There is a casting which is stationary and the disc rotates in this casing. When the driving shaft rotates, water flow is in a helical path in the chamber. Due to vortices and eddy-currents setup in the water, the casting tends to rotate in the same direction as that of the driving shafts. By varying the amount of water, the braking action is provided. Braking can also be provided by varying the distance between the rotating disk and the casting.The absorbing element is constrained by a force-measuring device placed at the end of the arm of radius r. 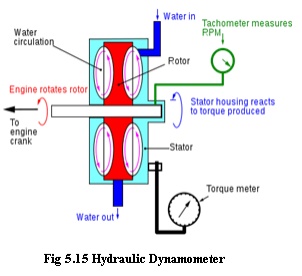