Force is a basic engineering parameter, the measurement of which can be done in many ways as follows: · Direct methods · Indirect methods

The mechanical quantity which changes or tends to change the motion or shape of a body to which it is applied is called force. Force is a basic engineering parameter, the measurement of which can be done in many ways as follows:

It involves a direct comparison with a known gravitational force on a standard mass, say by a balance.

It involves the measurement of effect of force on a body, such as acceleration of a body of known mass subjected to force.

That is, the unknown force is balanced against the known gravitational force.

The main parts of the arrangement are a follows:

·        A beam whose centre is pivoted and rests on the fulcrum of a knife edge. Either side of the beam is equal in length with respect to the fulcrum

·        A pointer is attached to the center of the beam. This pointer will point vertically downwards when the beam is in equilibrium. 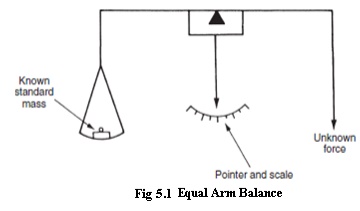 An unequal arm balance works on the principle of moment comparison.

The beam of the unequal arm balance is in equilibrium position when, 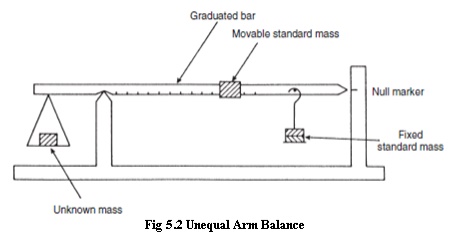 The main parts of the arrangements are as follows:

·        Provisions are made tox” applyontheanleftunknos beam.

in null balance position, the beam is in equilibrium.

It is a moment comparison device. The unknown force is converted to torque which is then balanced by the torque of a fixed standard mass arranged as a pendulum. 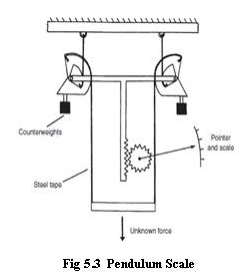 • The two sectors are connected on either side of an equalizer beam. The sectors carry counter weighs. To the center of  the equalizer beam is attached a rack and pinion arrangement.

·        As the pointer is attached to the pinion, the rotation of the pinion makes the pointer to assume a new position on the scale. The scale is calibrated to read the weight directly. Thus the force applied on the load rod is measured.

When a steel ring is subjected to a force across its diameter, it deflects. This deflection is proportional to the applied force when calibrated. 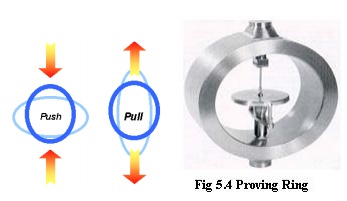 A steel ring attached with external bosses to apply force. A precision micrometer with one of its ends mounted on a vibrating reed.

·        When a steel cylinder is subjected to a force, it tends to change in dimension. On this cylinder if strain gauges are bonded, the strain gauge also is stretched or compressed, causing a change in its length and diameter.

·        This change in dimension of the strain gauge causes its resistance to change.

· A cylinder made of steel on which four identical strain gauges are mounted.

·        Out of the four strain gauges, two of them (R1 and R4) are mounted along the direction of the applied load(Vertical gauges)

·        The other tow strain gauges (R2 and R3 horizontal gauges) are mounted circumferentially at right angles to gauges R1 and R4.

·        When there is no load on the steel cylinder, all the four gauges will have the same resistance. As the terminals N and P are at the same potential, the wheat stone bridge is balanced and hence the output voltage will be zero. 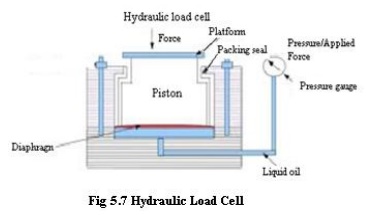 •        The applied force moves the piston down wards and deflects the diaphragm and this deflection of the diaphragm increase the pressure in the liquid medium.

•        The pressure is calibrated in force units and hence the indication in the pressure gauge becomes a measure of the force applied on the piston.

•        If a force is applied to one side of a diaphragm and an air pressure is applied to the other side, some particular value of pressure will be necessary to exactly balance the force. This pressure is proportional to the applied force.

•        The force to be measured is applied to the top side of the diaphragm. Due to this  force, the diaphragm deflects and causes the flapper to shut-off the nozzle opening.

•        Air supply is provided at the bottom of the diaphragm. As the flapper closes the nozzle opening, a back pressure results underneath the diaphragm.

·        This back pressure acts on the diaphragm producing an upward force. Air pressure is regulated until the diaphragm returns to the pre-loaded position which is indicated by air which comes out of the nozzle.

·        At this stage, the corresponding pressure indicated by the pressure gauge becomes a measure of the applied force when calibrated.