Temperature is one of the most measured physical parameters in science and technology; typically for process thermal monitoring and control. There are many ways to measure temperature, using various principles.

Four of the most common are:

·        Two dissimilar metals are bonded together into what is called a bimetallic strip, as sketched to the right.

·        Suppose metal A has a smaller coefficient of thermal expansion than does metal B. As temperature increases, metal B expands more than does metal A, causing the bimetallic strip to curl upwards as sketched.

·        Another application is in circuit breakers High temperature indicates over-current, which shuts off the circuit.

·        Another common application is for use as oven, wood burner, or gas grill thermometers. These thermometers consist of a bimetallic strip wound up in a spiral, attached to a dial that is calibrated into a temperature scale. 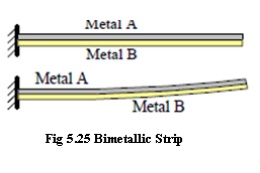 ·     Suppose the gas inside the bulb and tube can be considered an ideal gas. The ideal gas law is PV = mRT, where P is the pressure, V is the volume of the gas, m is the mass  of the gas, R is the gas constant for the specific gas (not the universal gas constant), and T is the absolute temperature of the gas.

·     •        The gage is a pressure gage, but is typically calibrated in units of temperature instead.

·     •        A common application of this type of thermometer is measurement of outside temperature from the inside of a building. The bulb is placed outside, with the tube running through the wall into the inside.

·        •        The gauge is on the inside. As T increases outside, the bulb temperature causes a corresponding increase in pressure, which is read as a temperature increase on the gauge. 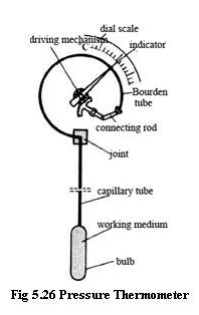