The skin changes of pregnancy

The skin changes of pregnancy

A darkening of the nipples, genitals, and of a line down the centre of the abdominal wall, is often accompan-ied by a generalized increase in skin pigmentation. Sebum excretion may increase. Spider naevi and pal-mar erythema are both common in pregnancy, and are caused by high oestrogen levels. Stretch marks and skin tags are common too.

Itching is common in pregnancy, usually for obvious reasons such as scabies, but sometimes in association with mild cholestasis. The terminology of the more striking itchy dermatoses of pregnancy has always been confusing. We now prefer to divide them into only three main categories.

(PUPP) (Fig. 19.18). This usually starts in the third trimester. The urticated lesions favour the abdomen, particularly in association with stretch marks. The cause of PUPP is not known, but it is not associated with danger to the unborn child, and clears after the child is born. Treatment is symptomatic. 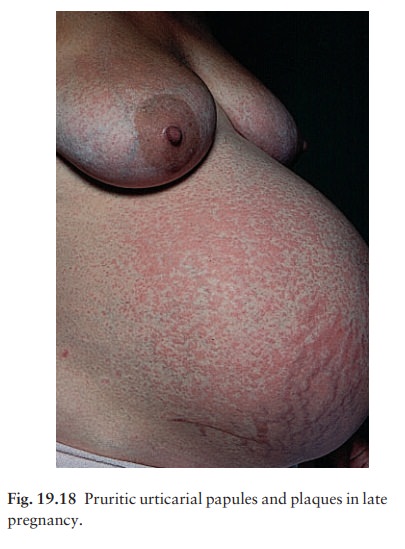 2 Prurigo of pregnancy. The development of manyexcoriated papules, which are not urticated, starts rather earlier than PUPP. It also caries no threat to the unborn child and clears after the child is born.

3 Pemphigoid gestationisis rare, and triggered byHLA differences between the mother and the fetus. However, the autoantibodies are directed at the same antigens as those of ordinary pemphigoid. The condition may start at any time during preg-nancy, or even just after childbirth, tending to start earlier in subsequent pregnancies. The itchy urticarial plaques, often annular, go on to blister. Immuno-fluorescence differentiates the condition from PUPP. Systemic corticosteroids are usually required, and there may be a risk of premature delivery.

Effect of pregnancy on other dermatoses

Candidiasis is common in pregnancy and genital warts can become unusually luxuriant. Podophyllin should be avoided for the latter as it may be toxic to the fetus. The effects of pregnancy on common disorders, such as atopic eczema, acne and psoriasis, are unpredictable in any individual patient, but there is an overall trend towards improvement.