The skin and internal malignancy 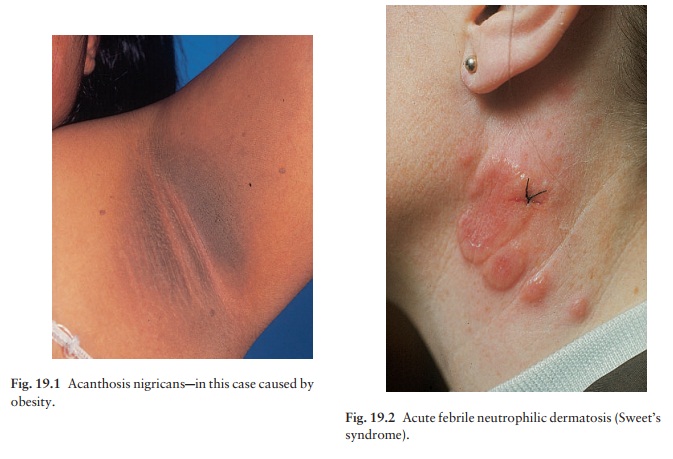 Obvious skin signs can be seen if a tumour invades the skin, or sends metastases to it; but there are other more subtle ways in which tumours can affect the skin.

The skin and internal malignancy

Obvious skin signs can be seen if a tumour invades the skin, or sends metastases to it; but there are other more subtle ways in which tumours can affect the skin. Sometimes they act physiologically, causing, for example, the acne seen with some adrenal tumours, flushing in the carcinoid syndrome, and jaundice with a bile duct carcinoma. These cast-iron associations need no further discussion here. However, the pres-ence of some rare but important conditions should alert the clinician to the possibility of an underlying neoplasm.

1 Acanthosis nigricansis a velvety thickening andpigmentation of the major flexures. Setting aside those cases caused by obesity (Fig. 19.1), by diabetes and characterized by insulin resistance, or by drugs such as nicotinic acid used to treat hyperlipidaemia, the chances are high that a tumour is present, usually within the abdominal cavity. 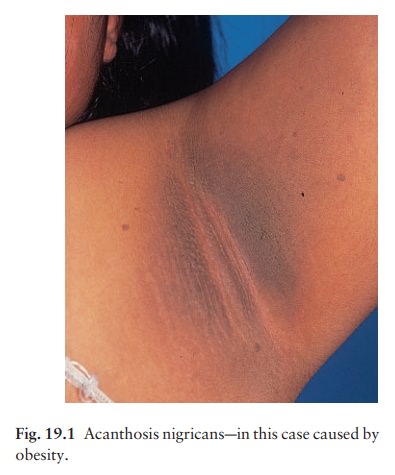 2  Erythema gyratum repens is a shifting pattern ofwaves of erythema covering the skin surface and look-ing like the grain on wood.

3 Acquired hypertrichosis lanuginosa(‘malignantdown’) is an excessive and widespread growth of fine lanugo hair.

4  Necrolytic migratory erythema is a figurate erythemawith a moving crusted edge. When present, usually with anaemia, stomatitis, weight loss and diabetes, it signals the presence of a glucagon-secreting tumour of the pancreas.

5 Bazex syndromeis a papulosquamous eruption ofthe fingers and toes, ears and nose, seen with some tumours of the upper respiratory tract.

6 Dermatomyositis, other than in childhood. 7 Generalized pruritus. One of its many causes is aninternal malignancy, usually a lymphoma.

8 Superficial thrombophlebitis. The migratory typehas traditionally been associated with carcinomas of the pancreas.

9 Acquired ichthyosis. This may result from anumber of underlying diseases but it is always important to exclude malignancy, especially lymphomas, as the cause.

10 Genetic conditions. One example is the Muir–Torre syndrome in which sebaceous adenomas are accompanied by surprisingly unaggressive visceral malignancies.

11 Acute febrile neutrophilic dermatosis(Sweet’ssyndrome; Fig. 19.2). The classic triad found in asso-ciation with the red oedematous plaques consists of fever, a raised erythrocyte sedimentation rate (ESR) and a raised blood neutrophil count. The most import-ant internal association is with myeloproliferative disorders. 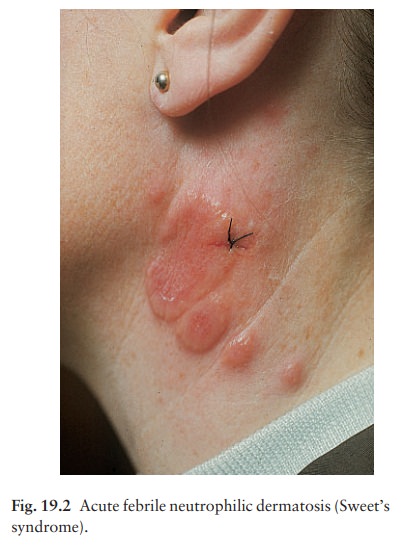 12 Others. Pachydermoperiostosis is a coarseningand thickening of the skin seen in association with severe clubbing. It can be inherited as an autosomal dominant trait, or be a result of the standard causes of clubbing which include conditions such as bronchial carcinoma.