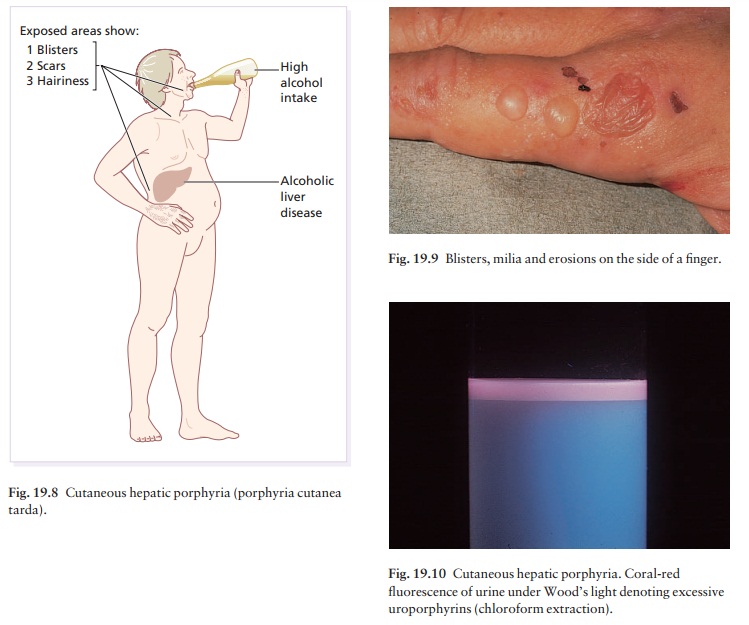 There are at least seven enzymes in the metabolic pathway that leads to the synthesis of haem.

There are at least seven enzymes in the metabolic pathway that leads to the synthesis of haem. There are also seven different types of porphyria, each being caused by a deficiency of one of these enzymes, and each having its own characteristic pattern of accumu-lation of porphyrin and porphyrin precursors. Some of these cause the photosensitivity (to ultraviolet radi-ation of wavelength 400 nm, which is capable of pen-etrating through window glass) that is the cardinal feature of the cutaneous porphyrias.

The different types can be separated on clinical grounds, aided by the biochemical investigation of urine, faeces and blood. Only five varieties will be mentioned here.

This is very rare, caused by mutations in the uropor-phyrinogen cosynthase gene, and inherited as an auto-somal recessive trait. Severe photosensitivity is noted soon after birth, and leads to blistering, scarring and mutilation of the exposed parts, which become increasingly hairy. The urine is pink and the teeth are brown, although fluorescing red under Wood’s light. A haemolytic anaemia is present. Treatment is un-satisfactory but must include protection from, and avoidance of, sunlight. Gene therapy may be possible in the future. The hairy appearance, discoloured teeth and the tendency to avoid daylight may have given rise to legends about werewolves

In this more common, autosomal dominant condition, caused by mutations in the ferrochelatase gene, a less severe photosensitivity develops during childhood. A burning sensation occurs within minutes of exposure to sunlight. Soon the skin becomes swollen and crusted vesicles sometimes appear, leading to pitted scars. Liver disease and gallstones occur. In addition to sun avoidance and the use of sunscreens, beta-carotene may be given orally.

There are two types: a sporadic type (accounting for 80% of cases) and a type inherited as an autosomal dominant trait (20%). Both are characterized by low hepatic uroporphyrinogen decarboxylase activity.

The sporadic type is usually seen in men, but rarely in women, who have damaged their livers by drinking too much alcohol but may also occur in women taking oestrogens. Recently it has been shown that some cases are caused by a previous hepatitis C virus infection. Blisters, erosions and milia form on the exposed parts of the face, and on the backs of the hands (Figs 19.8 and 19.9), in response to sunlight or to minor trauma. These areas become scarred and hairy. The urine is pink and fluoresces a bright coral-pink under Wood’s light  as a result of excessive uroporphyrins (Fig. 19.10). Treatment is based on avoiding alcohol and oestrogens, but other measures are usually needed too, including regular venesection or very low-dose hydroxychloroquine therapy (e.g. 100 mg twice weekly) under specialist supervision. Higher doses cause toxic hepatitis in these patients. 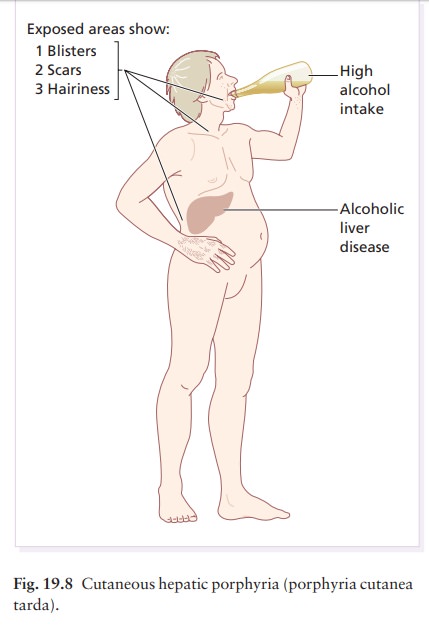 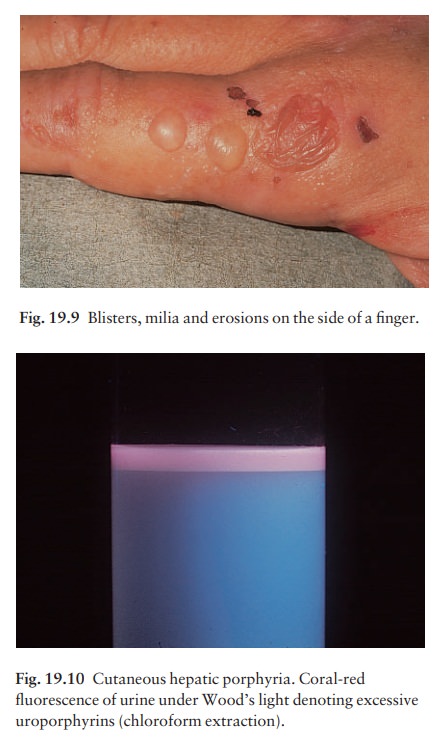 This condition, inherited as an autosomal dominant trait as a result of mutations of the porphobilinogen deaminase gene, is most common in Scandinavia. Skin lesions do not occur. Attacks of abdominal pain, accompanied by neuropsychiatric symptoms and the passage of dark urine, are sometimes triggered by drugs (especially barbiturates, griseofulvin, oestrogens and sulphonamides).

This disorder, inherited as an autosomal dominant trait, and a result of mutations of the protopor-phyrinogen oxidase gene, is particularly common in South Africa. It shares the skin features of porphyria cutanea tarda and the systemic symptoms and drug provocation of acute intermittent porphyria.

This term is used when skin changes like those of cutan-eous hepatic porphyria occur without an underlying abnormality of porphyrin metabolism. It is seen in a few patients on haemodialysis, and can be induced by some drugsanotably frusemide (furosemide) and non steroidal anti-inflammatory drugs. The overuse of sun beds is another possible cause. 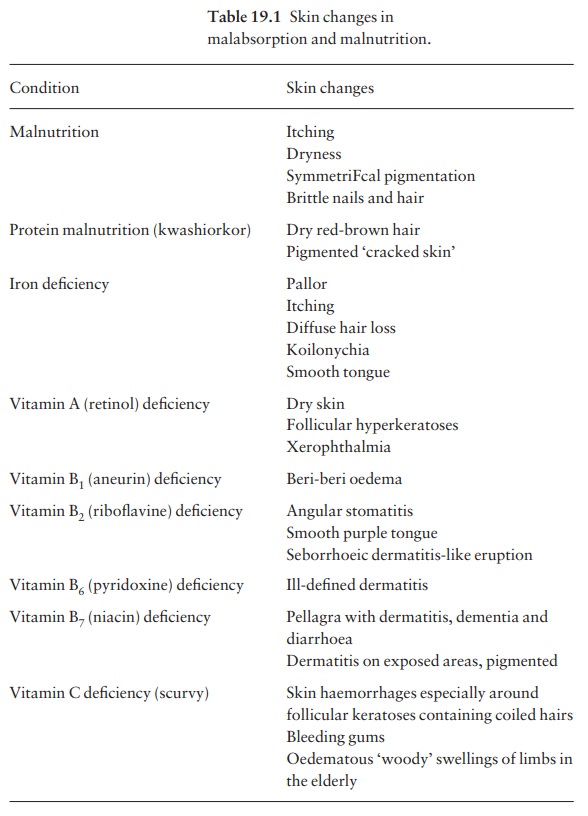