Visible light is the outcome of the nuclear fusion of hydrogen atoms, resulting in the production of helium atoms, gamma radiation and two electrons.

Visible light is the outcome of the nuclear fusion of hydrogen atoms, resulting in the production of helium atoms, gamma radiation and two electrons. This fusion occurs in the sun at a temperature of approximately 20 000 000 K. The gamma radiation and electrons combine to produce quanta of visible light. The entrap-ment of light is performed in photosynthetic cells by pigments; the most important of which are the chlorophylls. These are flat ring structures, with regions of con-jugated double and single bonds, and a long hydrophobic tail well designed for anchoring the pigments into membrane. Only red and blue light is absorbed by the chlorophylls in most organisms. Consequently, when white light from the sun shines upon them, they reflect green light, thus making these organisms appear green. Variation in the types of chlorophylls and the presence of additional acces-sory pigments all contribute to the observed colour of the organism and are the result of evolution which has developed the ‘best fit’ of light-trapping molecules to suit the ecological niche of the organism. It is worth pointing out that wholesale transport of the plant or bacterium for biotechnology purposes has to take this fac-tor into account. It is important to test the growth and performance characteristics of any translocated plant or bacterium to ensure that the new environment does not produce disappointing results. The purpose of the accessory pigments referred to above, which include the carotenoids and phycobiliproteins, the latter found in red algae and cyanobacteria, is to extend the range of absorbed wavelengths thus maximising the amount of energy trapped from light and protecting the photosynthetic system from potential damage by oxidation. A rather unusual pigment which functions as a primary pigment, is bacteriorhodopsin which causes the archaea which express it, to appear purple. Returning to the principally eukaryotic process, the chlorophylls described above which receive the incident light are clustered in highly organised structures called antennae located on the cell surface. The incident light excites the energy state of the recipient chlorophyll to a higher energy state. When the chlorophyll returns to its normal level, it releases electrons which are transferred to a neighbouring chlorophyll. The transfer is repeated until the electrons arrive at a photosystem, from which point they enter an electron transport chain linked to the reduc-tion of NAD+ and the synthesis of ATP. There are many similarities between electron transport in respiration and in photosynthesis in that they are both mem-brane bound and may be coupled to phosphorylation and thus synthesis of ATP, according to Mitchell’s chemiosmotic theory, by employing a similar strategy of a proton gradient described earlier for respiration. In eukaryotic higher organ-isms, photosynthesis occurs in the chloroplast while in bacteria it occurs in the cytoplasmic membrane. The precise location in bacteria is sometimes described as being the mesosome. This has been reported as an infolding of the bacterial cellular membrane which sometimes appears to be in association with the bac-terial DNA and often is found near nascent cell walls. Although considerable effort has been invested in determining its function, there is still disagreement as to whether or not the mesosome is indeed a bacterial cell structure or is simply an artefact occurring during preparation of samples for microscopy. Thus the site of bacterial photosynthesis remains uncertain beyond it being bound in the cytoplasmic membrane.

Photosystems in eukaryotes and cyanobacteria

There are two types of photosystem which may occur in photosynthetic organisms indicated in Figure 2.10: photosystem 1 which receives electrons from photo-system 2 but may also operate independently by cyclic electron transport, and photosystem 2 which is not present in all such organisms. The pathway for elec-tron transport has two principal routes. One involves only photosystem 1. In this, electrons transferred from the antennae to photosystem 1 cause excitation of the chlorophyll in this system. When the chlorophyll returns to its lower energy state, the electrons are transferred to ferredoxin, which is one of the iron-containing proteins in the chain of electron carriers. From this point there is a choice of routes; either the cyclic path by way of a chain of cytochrome molecules starting with cytochrome b563 and finally returning to chlorophyll a, or by the noncyclic route which is the transfer of electrons to NADP+. 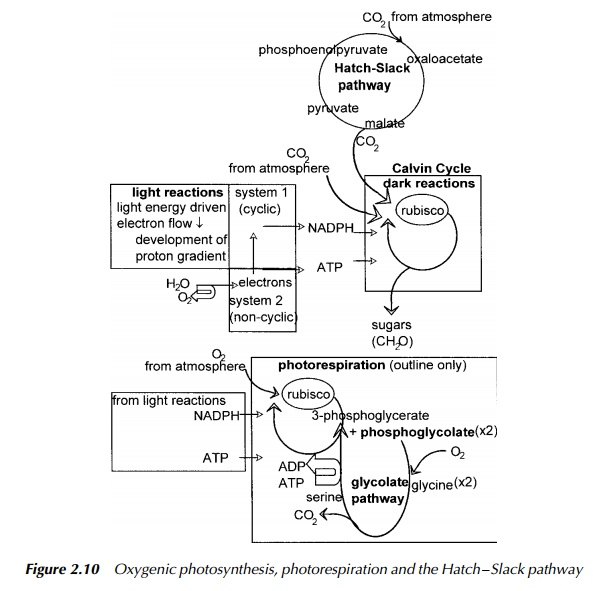 The source of the hydrogen atom required to reduce the NADP+ to NADPH in this system is the water molecule which donates its electrons to photosystem 2 to replace those lost to NADP+. It is the origin of the oxygen released during photosynthesis, hence the term oxygenic. Thus the overall flow of electrons in the noncyclic pathway is from the water molecule, through photosystem 2, along a series of cytochromes to photosystem 1 and thence to ferredoxin and finally NADP+, which also collects a hydrogen atom to complete the reduction to NADPH.

Both the cyclic and the noncyclic pathways produce a proton gradi-ent which drives the synthesis of ATP, but only the cyclic route has the facility of producing NADPH. A combination of cyclic and noncyclic pathways are used by the organism to produce the required amounts of NADPH and ATP used in the dark reactions for the synthesis of carbohydrate. So far the description has been of photosynthesis in eukaryotes and cyanobacteria.

Photosystems in purple and green bacteria

Looking at the general equation for the chemical reactions in photosynthesis shown in Figure 2.11, it may be seen that water is the electron donor dur-ing oxygenic photosynthesis while several molecules may play the same role in anoxygenic systems. Suitable molecules are listed in the figure, from which several interesting observations may be made. 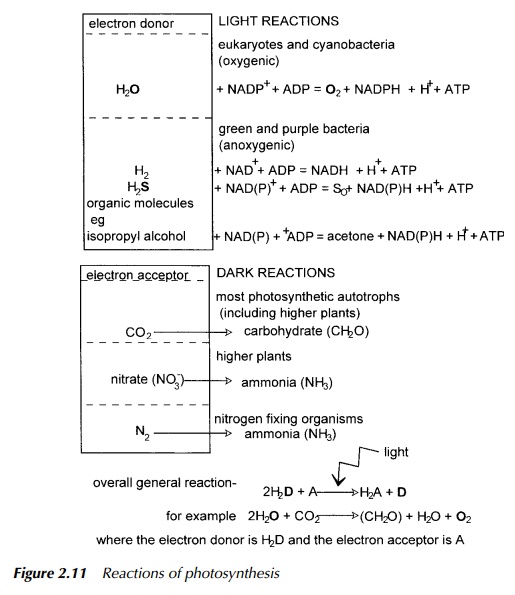 If the electron donor is hydrogen sulphide, which is the principal gas responsible for the foul smell, reminiscent of rotten eggs, typically found in wet and untilled soil, for example in the bottom of ponds, the product is sulphate or elemental sulphur. Examination of bacterial photosystems explains how this occurs.

Green and purple bacteria possess only one photosystem which is a fairly basic equivalent to photosystem 1 of eukaryotes and cyanobacteria, but employing a different set of electron carriers. In purple nonsulphur bacteria, this is only capable of cyclic electron flow which produces a proton gradient and thus allows ATP photosynthesis, but this process does not lead to NADPH production. A similar system exists in green nonsulphur bacteria. The lack of a photosystem equivalent to photosystem 2 in eukaryotes, requires these bacteria to provide a different route for the regeneration of NADH which serves much the same function as NADPH in carbohydrate synthesis. Their solution to this problem is to use as electron donors, molecules which have a more negative reduction potential than water and so are easier to oxidise. These include hydrogen, hydrogen sulphide, elemental sulphur and a variety of organic compounds including sugars, and various organic acids such as amino acids, and succinate.

There are many ways in which green and purple nonsulphur bacteria may produce NADH. For example, direct reduction is possible if they are growing in the presence of dissolved hydrogen gas due to the fact that hydrogen has a more negative reduction potential than NAD+. In addition, purple nonsulphur photosynthetic bacteria may use ATP or the proton gradient established during photosynthesis to reverse the electron flow such that the direction is from one of the electron donors noted above to NAD+.

Green and purple sulphur bacteria are rather different in that in addition to having a cyclic system broadly similar to that of purple bacteria, they have an additional enzyme activity which allows the nonlinear transfer of electrons to ferredoxin linked to NAD+ resulting in the production of NADH. One of the sources of electrons to replace those used in this reduction is the oxidation of hydrogen sulphide to sulphate or elemental sulphur, in a process comparable to the oxidation of water in oxygenic organisms. Other electron donors which may be used in this way are hydrogen and elemental sulphur. Both of these nonsulphur bacteria are strict anaerobes.

Photosystem in a halophile

A photosystem which is different again from those described so far is that found in the halophile Halobacterium salinarium which has previously been classified asHalobacterium halobium. Under normal conditions this organism obtains its energy by respiration, but in order to survive conditions of low oxygen concentra-tions, it can photosynthesise provided there is sufficient light. The pigment which has been developed for this purpose is bacteriorhodopsin, which is very similar to the rhodopsin pigment found in vertebrate eyes. The part of the molecule which absorbs light is retinal. When this occurs, changes in the bond formation of this chromophore result in expulsion of protons across the membrane thus producing a proton gradient. As described for other systems, this proton gradient may then be used to drive ATP synthesis.