Metabolic capability is the ability of an organism or cell to digest available food.

The genetic blueprint for metabolic capability

Metabolic capability is the ability of an organism or cell to digest available food. Obviously, the first requirement is that the food should be able to enter the cell which sometimes requires specific carrier proteins to allow penetration across the cell membrane.

Once entered, the enzymes must be present to catalyse all the reactions in the pathway responsible for degradation, or catabolism. The information for this metabolic capability, is encoded in the DNA. The full genetic information is described as the genome and can be a single circular piece of DNA as in bacteria, or may be linear and fragmented into chromosomes as in higher animals and plants.

Additionally, many bacteria carry plasmids, which are much smaller pieces of DNA, also circular and self-replicating. These are vitally important in the context of environmental biotechnology in that they frequently carry the genes for degradative pathways. Many of these plasmids may move between different bacteria where they replicate, thus making the metabolic capability they carry, transferable. Bacteria show great promiscuity with respect to sharing their DNA. Often, bacteria living in a contaminated environment, themselves develop addi-tional degradative capabilities. The source of that genetic information new to the organism, whether it is from modification of DNA within the organism or transfer from other microbes, or DNA free in the environment, is a source of hot debate between microbiologists.

DNA not only codes for RNA which is translated into proteins but also for RNAs which are involved in protein synthesis, namely transfer RNA (tRNA) and ribosomal RNA (rRNA), also, small RNAs which are involved in the processing of rRNA. These are illustrated in Figure 2.6. There have been many systems used to describe the degree of relatedness between organisms, but the most generally 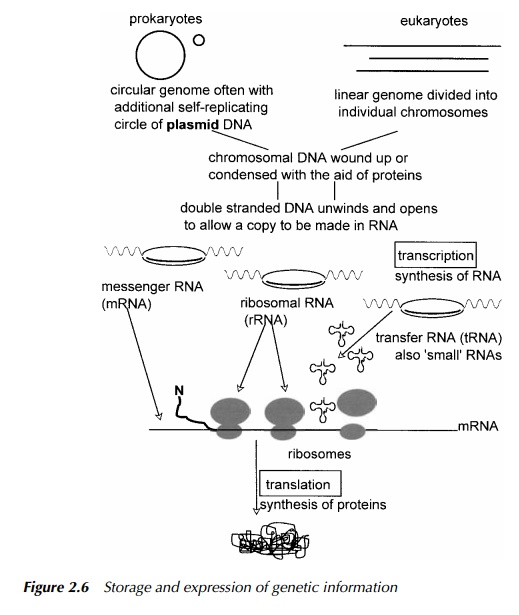 accepted is based on the sequence of the DNA coding for ribosomal RNA, the rDNA (Stackebrandt and Woese 1981). For completeness, it is important to mention the retroviruses which are a group of eukaryotic viruses with RNA rather than DNA as their genome. They carry the potential for integration into inheritable DNA due to the way in which they replicate their genomic RNA by way of a DNA intermediate.