This class of macromolecules includes the neutral lipids which are triacylglycerols commonly referred to as fats and oils. Triacylglycerols are found in reservoirs in micro-organisms

This class of macromolecules (see Figure 2.2) includes the neutral lipids which are triacylglycerols commonly referred to as fats and oils. Triacylglycerols are found in reservoirs in micro-organisms as fat droplets, enclosed within a ‘bag’, called a vesicle, while in higher animals, there is dedicated adipose tissue, comprising mainly cells full of fat. These various fat stores are plundered when energy is required by the organism as the degradation of triacylglycerols is a highly exer-gonic reaction and therefore a ready source of cellular energy. Gram for gram, the catabolism of these fats releases much more energy than the catabolism of sugar which explains in part why energy stores are fat rather than sugar. If this were not the case the equivalent space taken up by a sugar to store the same amount of energy would be much greater. In addition, sugar is osmotically active which could present a problem for water relations within a cell, should sugar be the major energy store. 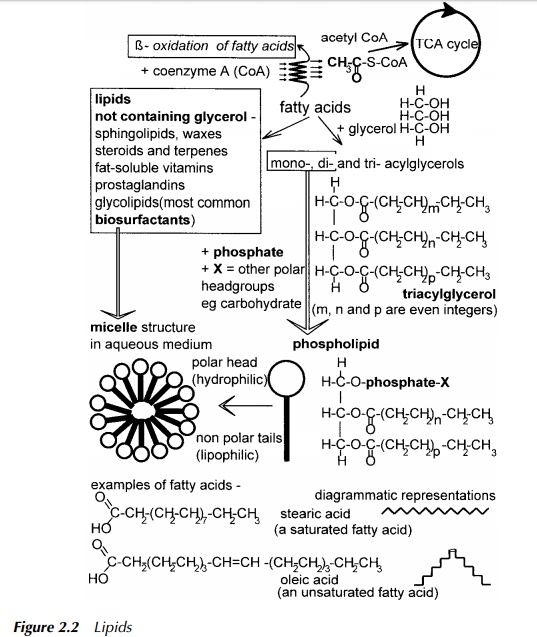 Triacylglycerols comprise a glycerol backbone onto which fatty acids are ester-ified to each of the three available positions. They are insoluble in an aqueous environment due to the nonpolar nature of the fatty acids forming ‘tails’ on the triacylglycerol. However, diacylglycerols and monoacylglycerols which are ester-ified at only two or one position respectively, may form themselves into micelles due to their polar head, and so may exhibit apparent solubility by forming an emulsion. The tri-, di- and monoacylglycerols have in the past been described as tri-, di- or monoglycerides. Although these are inaccurate descriptions of the chemistry of these compounds the terms tri-, di- and monoglycerides are still in common usage. Chemically, fats and oils are identical. If the compound in question is a liquid at room temperature, frequently it is termed an oil, if solid it is described as a fat. The melting point of these compounds is determined to a large extent by the fatty acid content, where in general, saturated fatty acids, due to their ability to pack together in an orderly manner, confer a higher melting point than unsaturated fatty acids.

Their catabolism is by hydrolysis of the fatty acids from the glycerol backbone, followed by oxidation of the fatty acids by β -oxidation. This process releases glycerol which may then be further degraded by feeding into the central path-ways of glycolysis, and several units of the acetyl group attached to the carrier Coenzyme A (Figure 2.2), which may feed into the central metabolic pathways just prior to entry into the TCA cycle (Figure 2.1). 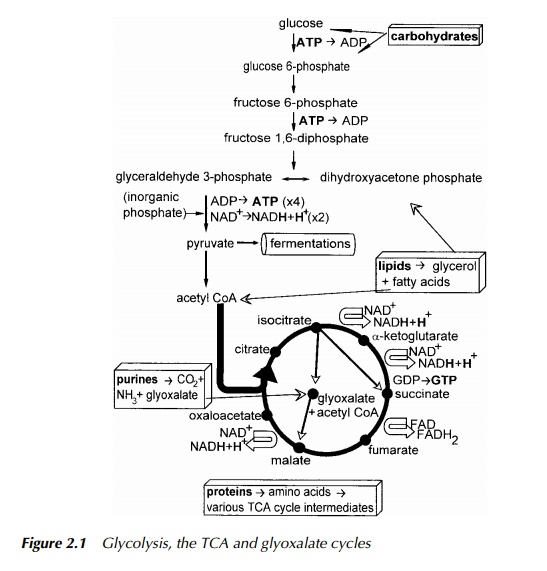 Compound lipids include the phosphoglycerides which are a major component of cell membranes. These can have very bulky polar head groups and nonpolar tails which allow them to act as surfactants and in this specific context, biosur-factants. The most common surfactants are glycolipids (Figure 2.7), which do not have a glycerol backbone, but have sugar molecules forming a polar head and fatty acids forming nonpolar tails, in an overall structure similar to that shown for phospholipids in Figure 2.2. Derived lipids include fat soluble vitamins, natural rubber, cholesterol and steroid hormones. It is interesting to note here that bacteria do not synthesise steroids, and yet some, for example, Comamonas testosteroni, are able to degrade specific members of the group; testosterone in the case given (Horinouchi et al. 2001). However, oestrogen and its synthetic analogues used in the contraceptive pill, are virtually recalcitrant to decomposition by bacteria. This is proving a problem in waterways especially in Canada where the level of such endocrine disrupters has become so high in some lakes that the feminisation of fish is becoming a concern (McMaster 2001). 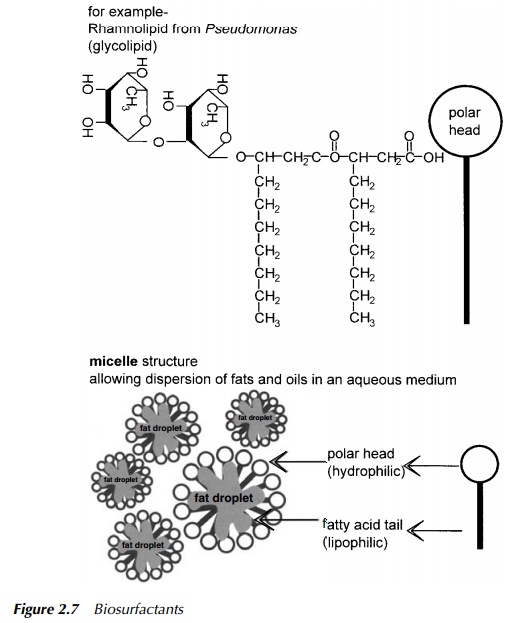 The first catabolic step in protein degradation (see Figure 2.5) is enzymatic hydrolysis of the peptide bond formed during protein synthesis resulting in the release of short pieces, or peptides, and eventually after further degradation, amino acids. The primary step in amino acid catabolism is to remove the amino group thus producing anα-keto acid. This is usually achieved by transfer of the amino group to the TCA cycle intermediate, α-ketoglutarate, resulting in the 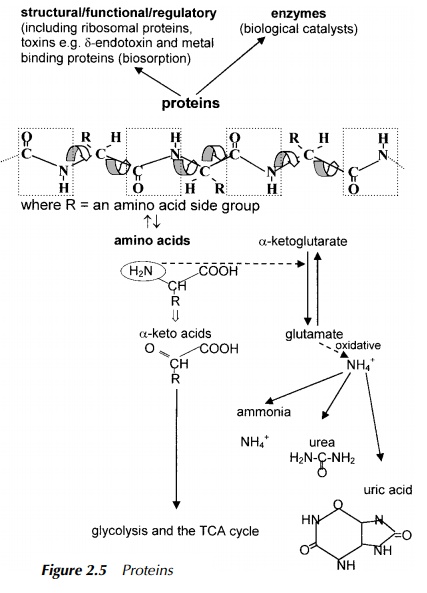 amino acid, glutamate. Amino groups are highly conserved in all organisms due to the small number of organisms able to fix atmospheric nitrogen and so the source of an amino group is usually by transfer from another molecule. However, eventually, nitrogen is removed by oxidative deamination and is excreted in a form which depends upon the organism. Ammonia is toxic to most cells, but if an organism lives in an aqueous habitat, it may release ammonia directly into its surroundings where it is diluted and so made harmless. However, even in such an environment, if dilution should prove insufficient, ammonia concentration will increase, likewise the pH, consequently, the well-being of the organism will be compromised. Organisms which cannot make use of dilution, rid themselves of ammonia by converting it first into a less toxic form such as urea in the case of mammals and the fairly insoluble uric acid in the case of birds and most reptiles. Bacteria may then convert the excreted ammonia, urea or uric acid into nitrite and then oxidise it to nitrate which may then be taken up by plants. From there it is included in anabolic processes such as amino acid synthesis to produce mate-rial ingested by higher animals and the whole procedure of amino group transfer repeats itself. This is the basis of the nitrogen cycle which forms a central part of much of the sewage and effluent treatment described.

The α-keto acid resulting from deamination of the amino acid is degraded by a series of reactions, the end product being dependent on the original amino acid, but all will finally result as a glycolysis or TCA cycle intermediate. A fascinating story of catabolism showing collaboration between mammals and bacteria resident in the gut, is the degradation of haemoglobin, the component of blood which carries oxygen and carbon dioxide. Haemoglobin comprises the protein, globin, into which was inserted during synthesis, the haeme ring system where the exchange between binding of oxygen or carbon dioxide takes place in circulating blood. The first step of haemoglobin degradation, performed in the mammalian system, is removal of the haeme ring structure releasing globin which is subject to normal protein degradation. Haeme has its origins in the amino acids in that the starting point for the ring structure is the amino acid, glycine. The degradation pathways starts with removal of iron and release of carbon monoxide to produce the linear structure, bilirubin. This is eventually excreted into the gut where enteric (gut) bacteria degrade the bilirubin to urobilinogens which are degraded further, some being excreted in the urine and others, such as stercobilin, are excreted in the faeces. All these products are further metabolised by microbes, for example, in the sewage treatment plant.

Degradation of nucleic acids (see Figure 2.4) is also a source of ammonium ion. The purines are broken down to release CO2 and uric acid which is reduced to allantoin. This is then hydrolysed to produce urea and glyoxylate which can enter the TCA cycle by the glyoxylate pathway present in plants and bacteria but not mammals. The urea thus produced may be further hydrolysed to ammonium ion or ammonia with the release of carbon dioxide. The form in which the nitrogen derived from the purines is excreted, again depends upon the organism. 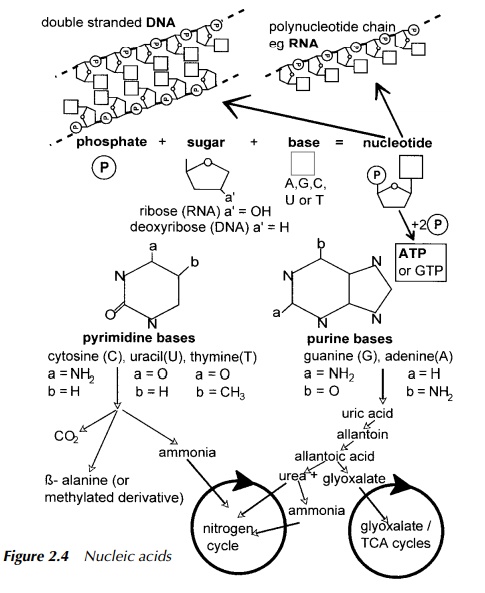 Pyrimidines are hydrolysed to produce ammonia which enters the nitrogen cycle, carbon dioxide and β -alanine or β -aminoisobutyric acid both of which are finally degraded to succinyl CoA which enters the TCA cycle.

The carbohydrates (see Figure 2.3) form a ready source of energy for most organ-isms as they lead, by a very short route, into the central metabolic pathways from which energy to fuel metabolic processes is derived. When several sugar units, such as glucose, are joined together to form macromolecules, they are called polysaccharides. Examples of these are glycogen in animals, and cellulose in plants. In nature, the sugars usually occur as ring structures and many have the general formula, C(H2O)n , where carbon and water are present in equal propor-tion. Catabolism of glucose has been described earlier. As stated earlier, the resulting metabolite from a given carbon source, or the presence of specific enzymes, can be diagnostic of an organism. Whether or not the enzymes of a particular route are present can help to identify a microbe, and carbohydrate metabolism is frequently the basis of micro-organism identification in a Public Health laboratory. Glucose enters the glycolytic pathway to pyruvate, the remainder of which is determined in part by the energy requirements of the cell and in part by the availability of oxygen. If the organism or cell normally exists in an aerobic environment, there is oxygen available and the pyruvate is not required as a starting point for the synthesis of another molecule, then it is likely to enter the TCA cycle. If no oxygen is available, fermentation, defined later in this chap-ter, is the likely route. The function of fermentation is to balance the chemical reductions and oxidations performed in the initial stages of glycolysis. 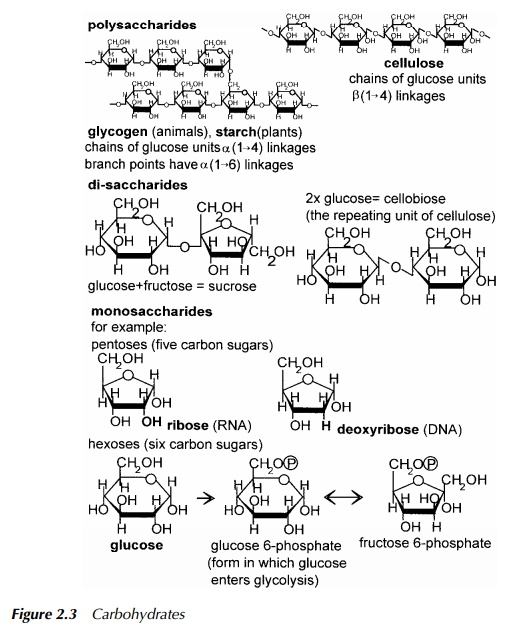