Leaves grow on stems below their growing points, and are developed from leaf buttresses in buds.

Leaves grow on stems below their growing points, and are developed from leaf buttresses in buds. All leaves are lateral organs which develop from a fo-liar (or leaf) buttress, which, in simple terms, is a meristematic projection above the general surface of the protoderm (a primary meristem or meriste-matic tissue that gives rise to the epidermis;).

Leaf buttresses are initiated near the shoot apex and in lateral buds, in regular sequence (phyllotaxis), and lead to the formation of mature leaves. Although we commonly think of leaves as being thin, flat and green, their form is closely related to the habitat in which the particular species grows. The outline and general shape can also be characteristic of a genus, and sometimes of a family.

In general terms, most developing leaves contain two groups of initials or meristems – the marginal and submarginal initials. Marginal initials gen-erally give rise to the adaxial and abaxial epidermis of the leaf, whilst the submarginal initials generally give rise to all the internal leaf tissues, in-cluding the procambium, from which all vascular tissues are subsequently differentiated. In dicotyledonous plants, the transition from a condition where the leaf is a photoassimilate sink to one in which it is a net exporter of photoassimilate (source status) begins shortly after the leaf has begun to unfold, at which point, the major morphogenetic events that determine leaf shape are, to all intents and purposes, over. Maturation of the phloem and xylem in the midrib and the higher-order veins, which occurs in an acrop-etal direction, is largely complete before the transition begins. During leaf unfolding, the functional maturation of the minor veins generally begins in a basipetal direction. There is thus a degree of maturation of the leaf from the base to the tip of the lamina during the sink to source transition. The minor venation network forms the distribution network of the leaf which provides first an importing and then an exporting network as the leaves continue to expand.

Leaves show a surprisingly wide range of form when it is considered that in the majority of plants they perform three basic physiological functions. These involve the manufacture of food materials through the process of photosynthesis, the transport of assimilated material and the evaporation of water, a process that drives the transpiration stream and, concomitantly, aids cooling of the leaf in hot conditions when available transpirational water is not limiting. Each of these functions is either initiated or takes place directly in the mesophyll of leaves.

Attempts to visualize the steps by which the more unusual leaf forms arise must originate from a study of the development of the leaf itself. In other words, development must not be inferred but rather observed. Figure 6.1 shows the possible evolutionary pathways of several of these leaf forms, without suggesting that foldings and partial fusions, leading to total fusions, really occur during the growth of the present-day owners of a particular type. 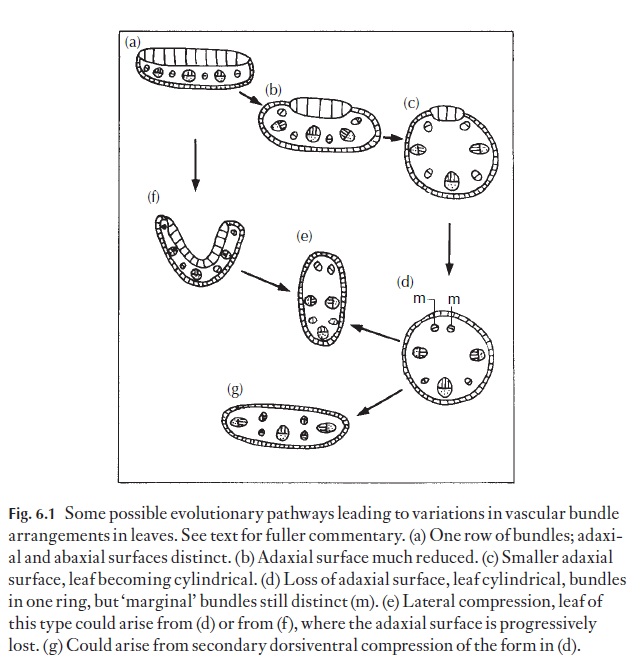 To emphasize the danger of thinking of a sequence of folding and fusion processes, look at the vascular bundle arrangement of Thurnia, a plant from South America (Fig. 6.2). The relative position of the small vascular bundle system to the large bundle system, and the inverted orientation of these bundles, would require a great deal of tortuous folding to achieve, if in fact they did not arise at the same time, from a meristem! 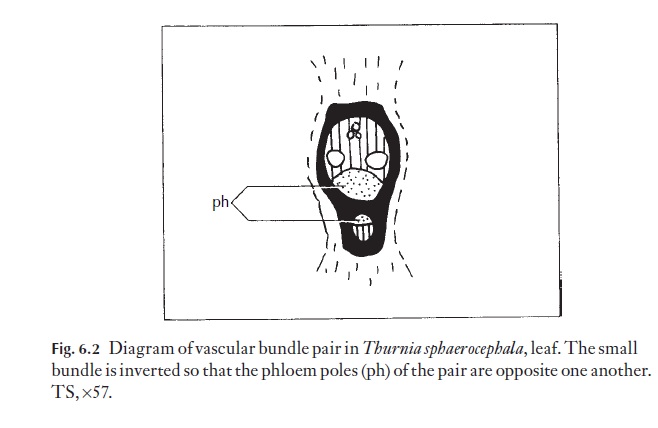 That leaves have vastly differing internal structure is demonstrated by the mesophyll cells (photosynthetic and other parenchymatous tissues of the leaf blade contained between the epidermal layers), the photosyn-thetic cells of which are arranged in different patterns and locations and which may be ascribed directly to the functional processes of the photosynthetic cycle occurring within the leaf (see below). Leaves may be isolateral, isobilateral, dorsiventral, pseudodorsiventral or even needle-like in cross-section (see Glossary). Whatever the leaf shape, chloroplasts are concentrated within the cytoplasmic matrix of the chlorenchyma cells and, for the most part, the majority of the chloroplasts are to be found in the upper palisade mesophyll cells, or their equivalent. Mitochon-drial populations in these obviously photosynthetic cells may be high as well.

Leaves can be classified in various ways, for example by their shape and size, their texture and colour, the degree of hairiness, to name but a few. These variable features are frequently reflected in different internal tissue arrangements. Some modifications are typical of plants that grow under particular conditions, but others may owe more to the genome than to the habitat which the plant occupies.

The shape of the leaf lamina and the nature of its margin are outside the scope of this book. It should be remembered that fragments of leaves, whilst not showing the shape of a leaf blade, may often have the characteristic den-tations of the leaf margin and this can be a big help in identification.

Although ecological adaptations are discussed, they also warrant brief mention here. Leaves differ from most stems and roots in that they are almost all primary organs composed of primary tissues. However, some secondary growth can occur, as, for example, in the vascular supply of some gymnosperm leaves, in the petioles and midveins of some dicotyle-donous foliage leaves, and in the leaf bases of some monocotyledons which display a form of secondary growth in their stems. Secondary growth in the dicotyledonous leaves differs from that in monocotyledons, just as it does in their respective stems. However, large changes do not occur in the shape or thickness of dicotyledonous leaves after primary growth has ceased. Pri-mary growth occurs at the basal (intercalary) meristem of many monocoty-ledonous leaves, often for a long time after maturation of the distal portions. Grass in lawns would not recover from cutting and continue to grow if this were not so!

Some leaves are ephemeral, and are quickly shed, leaving nothing but a scar or perhaps a basal, membranaceous sheath as in Elegia (Restionaceae) or Equisetum. The stem, which remains green, then takes over the func-tions of the leaf in such xeromorphs. Other plants shed their leaves at times of physiological drought, for example when the ground is frozen, as is dem-onstrated by north and south temperate mesophytic trees and shrubs. The leaves on herbaceous perennials and annuals last for one growth season only. In biennials, it is common for rosette leaves to live for two years. Some trees and shrubs of temperate regions (or at temperate altitudes in the Trop-ics) have reduced leaves, for example, as in Pinus and Cedrus.

Many families have members in which leaves thrive for more than one season and are thus termed ‘evergreen’. Plants with long-lived leaves are not confined to particular climatic or altitudinal zones. The evergreens include such plants as the conifers mentioned above, as well as broad-leaved plants like Camellia, Borassus, Phoenix, Rhododendron, llex, someQuercus species,Coffeaand Ficus. In Araucaria, a gymnosperm, the leaves can live for decadesand the green tips can be seen in the bark of the trunk.

It is interesting to note that some desert plants develop their leaves only after rain, for example Schouwia of the Brassicaceae, and then lose them during periods of sustained drought. Many bulbous plants, for exampleNarcissus, Tulipa, Albuca and plants with corms, for example Gladiolus, Wat-sonia, Crocus, have leaves that grow during or after the wet season and diedown, leaving the underground storage organs safe from desiccation dur-ing the dry or cold period. Aquatic plants may have required hibernation periods, where leaves die at the end of a growing season, for example Pota-mogeton, Stratiotes andNymphaea species.

By now it should be apparent that there is no such thing as a ‘typical’ monocotyledous or dicotyledonous leaf. Except in extreme cases of reduc-tion, as, for example, in some aquatic plants or xeromorphs, most plants have leaves which are made up of a combination of various essential components – the mechanical and supply systems, the tissue in which pho-tosynthesis is carried out, and the outer skin or epidermis.