Cuticle and cuticular sculpturing - The leaf

In all but the wettest environments, leaf surfaces must also be capable of helping to reduce water loss.

In all but the wettest environments, leaf surfaces must also be capable of helping to reduce water loss. This is helped in many species by the presence of a transparent outer layer, the cuticle, which retards water loss. This tends to be thinnest in species not normally subject to water stress, and thickest in those that are. Angiosperms with submerged leaves may have an exceed-ingly thin cuticle, or it may be absent. The cuticle may also give added me-chanical strength. It helps resist abrasion by blown sand particles, or in the case of some conifers, blown ice crystals. The main component of cuticle is cutin, which may permeate the walls of epidermal cells, or just the outer walls. It is most developed in species confined to extremely arid habitats. Low availability of water to the plant can be induced by saline soils, so plants growing on these often show adaptations similar to those from dry habitats.

The cuticle and the outer part of the wall of the epidermis that it covers and grades into is patterned or sculptured in many plants. If the sculpturing is of low relief it will not show strongly in sections and may be faint in surface view. The strong sculpturing in Aloe, for example, may often be obscured by the granular appearance of the interface between cuticle and epidermis (Fig. 6.4). 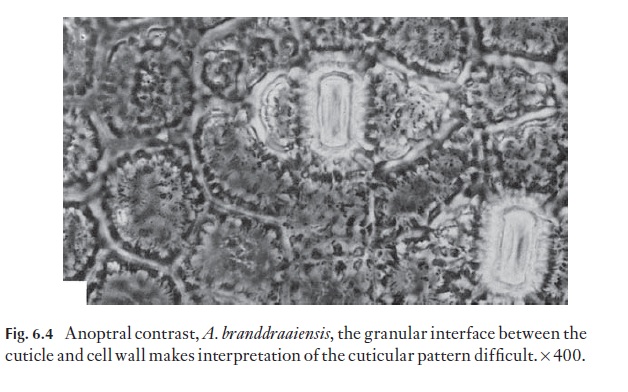 Although many patterns can be seen with the light microscope, either on intact cells or with detached cuticles or surface replicas, the scanning elec-tron microscope is important in surface studies.

In aloes and haworthias, the range of cuticular outer cell wall patterns is such that individual species or groups of species can often be identified by their particular pattern. Striations are quite common, as are micropapillae. Some patterns are shown in Fig. 6.5.

Sometimes the cuticle and its markings are masked by a covering of wax. Most people are familiar with the waxy ‘bloom’ on apples and plums, and have noticed that some leaves have a dull sheen on them, for example, as in the cabbage (Brassica) or in Agave. Few may realize that many other plants also have a waxy crystalline covering, because this may be very thin and eas-ily removed. Other chemicals such as flavenoids are sometimes involved. Surface wax may be smooth, or may show varying degrees of roughness. It may function in helping reduce water loss, but it has reflecting and other properties. 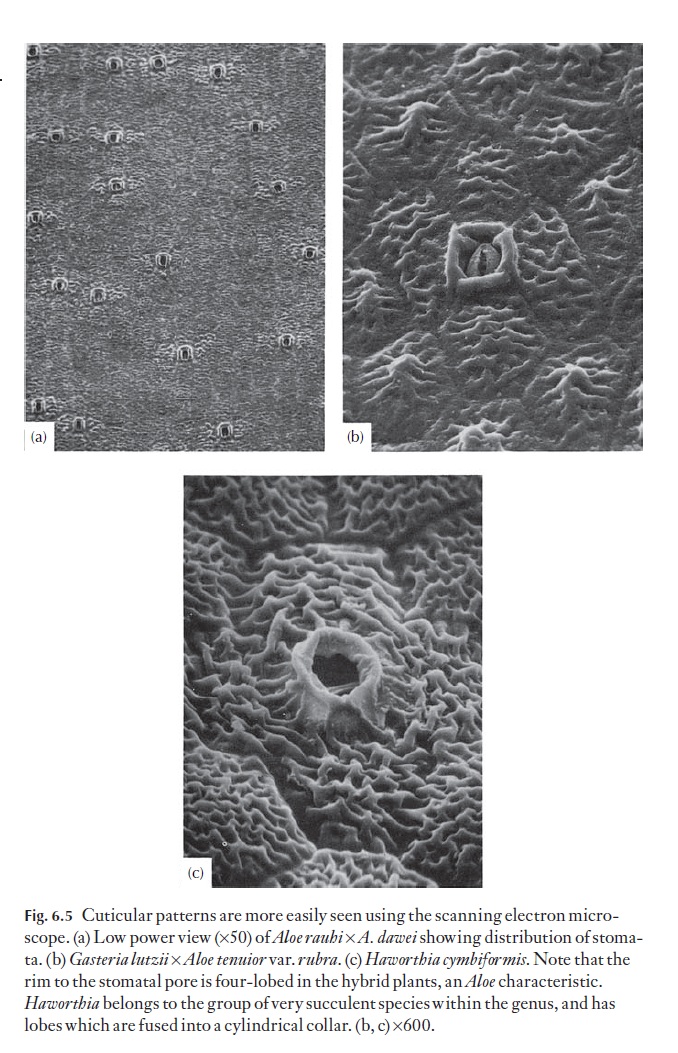 Many plants with xeromorphic characteristics have a waxy covering, which retards cuticular water loss.

Wax takes on many crystalline forms, and may also be present as a melted-down layer. Wax in a few species may go through a daily cycle in which wax crystals of one form melt, and recrystallize into another form, but this is rare. Many xeromorphic monocotyledons have large numbers of their stomata plugged by wax. The scanning electron micrograph in Fig. 6.6 shows some wax flakes in Aloe lateritia var.kitaliensis. Wax embellish-ment is often associated with sunken stomata.

Secondary sculpturing defines: (i) the orientation and shapes of the cells and describes the number of anticlinal walls, whether they are straight, or if not, the degree of sinuosity; how distinct they are, as ridges or chan-nels, for example (e.g. cells six-sided, as long as to twice as long as wide, with straight sunken anticlinal walls; Fig. 6.5b) (ii) details of the outer (periclinal) wall (e.g. flat, concave, convex with a pronounced central papilla; in Fig. 6.5c they are low-domed); (iii) the position, type and frequency of stomata.

Tertiary sculpturing is the finer detailed sculpturing found on the outer periclinal wall, superimposed on the primary sculpturing. It may be absent, and the surface is then described as smooth. It includes micropapillae, and defines their size and distribution (e.g. fine, covering the whole cell surface), striae, their thickness, distribution and orienta-tion (e.g. coarse, longitudinally oriented striae, along the long axis of the cell, or striae forming a reticulum as in Fig. 6.5c).

Quaternary sculpturing includes epicuticular secretions, for example wax, farinose material (some Primulaspecies). This may be present as smooth layers, upright flakes with random (e.g. Fig. 6.6) or defined orientation; coarse or fine amorphous particles, filaments or tubes, for example. See the references in the further reading.

Epidermal cells vary a great deal from species to species, particularly as seen in surface view. Many monocotyledons, and in particular those with strap-shaped or axially elongated leaves, have elongated cells that are arranged in well-defined longitudinal files. These cells may be 4–6 or more sided; their anticlinal walls may be straight, curved or sinuous. Sometimes the outlines of these walls are more sinuous near the cell outer wall than near the inner wall. Figure 6.7 shows a range of named examples of cell forms.

The epidermal cells of leaves of grasses fall into two distinct classes, described in the literature on grass anatomy as ‘long’ and ‘short’ cells. These two size classes should not be confused with variations in cellular dimensions that are to be seen over veins (costal cells) and between veins 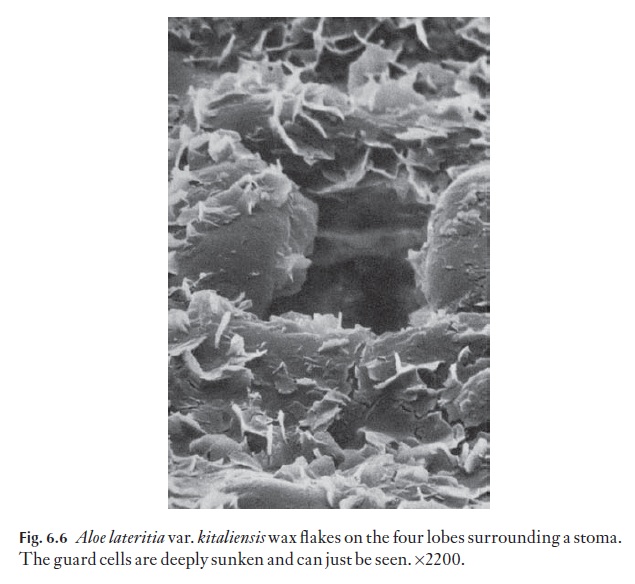 (intercostal cells). The true ‘short’ cells are frequently suberized, or they may contain silica bodies. Even small fragments of leaf from a member of the Poaceae can often be identified to the family level, based upon the epi-dermal cell characters.

The majority of dicotyledons and many monocotyledons without axially elongated leaves (strap-shaped), for example Smilax, Gloriosa, tend to have epidermal cells of irregular shape and size. They have straight, curved or sinuous anticlinal walls. Because dicotyledon leaves lack a basal meristem, but grow in area by regions of cell division, their epidermal cells are rarely arranged in clear rows. Figure 6.8 shows a range of cell types from named plants. 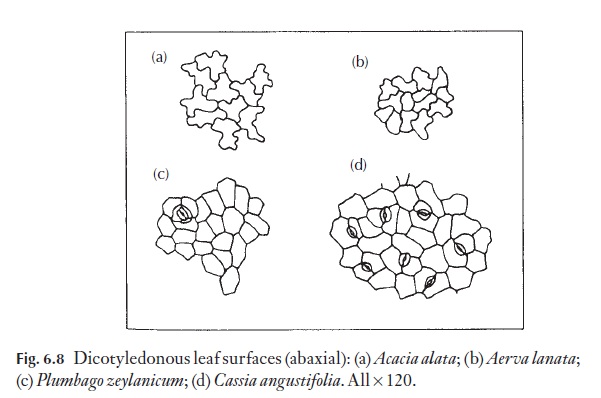 Anticlinal walls of the epidermal cells of both monocotyledons and dicotyledons can be very thin and hardly visible from the surface, or they may range through degrees of thickness to very thick, so that the lumen of the cells appears from the surface to be very reduced (Fig. 6.9). In dicoty-ledons, as in monocotyledons, the costal cells frequently differ from those of intercostal regions; they tend to be elongated in the direction of the veins.

Sometimes the cells of the upper and lower surfaces of leaves may be sim-ilar in size and structure, but more often they are not alike. In monocotyle-dons with true dorsiventral leaves, adaxial and abaxial epidermal cells may differ markedly in size, and the adaxial epidermis, may contain bulliform (‘motor’) cells that are considerably larger than the normal epidermal cells. The dissimilarity may be in cell size and wall thickness, or merely the absence of stomata from one surface.

Cells at the margins and the tip of the leaf are often narrower than the rest, and have thicker walls. Some marginal cells may develop into unicellu-lar or multicellular prickles. 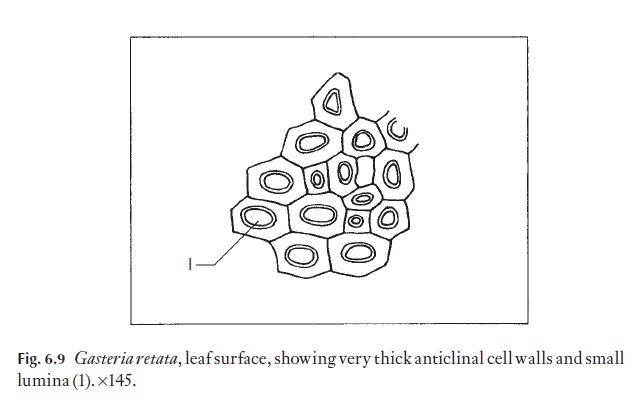 Measurements of epidermal cells have been made to try and distinguish between closely related species. If enough careful measurements are made and a statistical analysis carried out, significant differences may be detect-ed. Unfortunately, this seemingly valuable method is limited in usefulness by the natural variation in size within different specimens of the same species, or even among cells from different leaves on the same plant. Sun and shade leaves, for example, can differ in this respect.

Even if absolute size differences may seem to be unreliable in many instances in distinguishing between species, the proportion of length to width of epidermal cells can often give useful data for comparison. This length: width ratio can be fairly constant in a species, even if the cell size varies phenotypically. The importance of selecting leaves for comparison from comparable positions on the various plants under study cannot be overstressed. Normally, one would select mature, vigorous leaves. The eye can play tricks, and it is easy to be misled about length: breadth ratios unless they are actually measured – look at the diagrams in Fig. 6.10. Here, dia-grams showing various height: width ratios are illustrated, together with diagrams of the epidermis of named plants in transverse section. 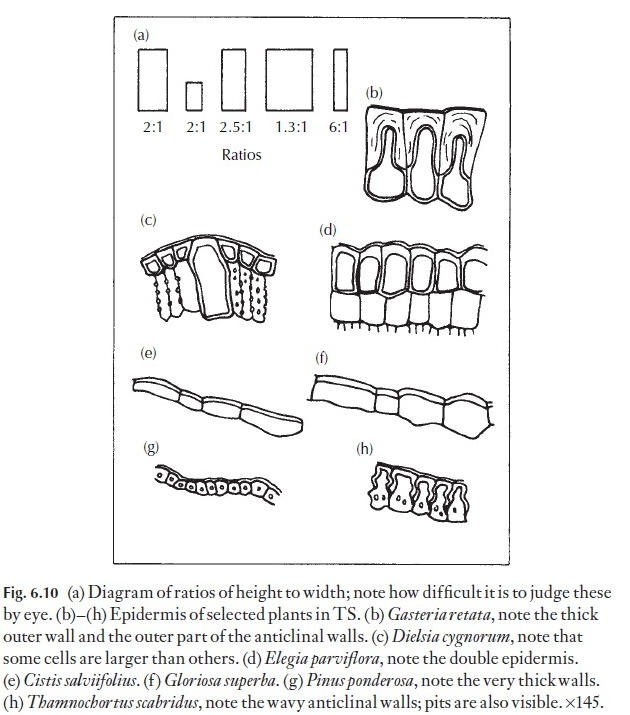 Many leaves capable of rolling up in dry, unfavourable conditions, and reopening again under conditions when there is no water stress, have spe-cial, thin-walled water-containing cells that enable them to make these movements. These are the bulliform or motor cells. Examples may be found in many grasses, for example, marram grass, Ammophila arenaria, and many members of the bamboosoid grasses. The shape, size and disposition of such cells can be used as an aid to classification and identification. Cells with similar properties are present at the pulvinus and at the attachment regions of the leaflets to the rachis in many plants whose leaves fold at night.