Specifics of the monocotyledonous foliage leaf

A commonly mentioned anatomical feature of C4 plants is the orderly arrangement of mesophyll cells with reference to the bundle sheath cells,forming concentric layers around the vascular bundle as seen in transection.

Specifics of the monocotyledonous foliage leaf

A commonly mentioned anatomical feature of C4 plants is the orderly arrangement of mesophyll cells with reference to the bundle sheath cells,forming concentric layers around the vascular bundle as seen in transection (Fig. 6.29a). Bundle sheath cells of C4 plants have few if any intercellular air spaces between them, which is in direct contrast to the sometimes large in-tercellular space volume between mesophyll cells in C3 plants. Observa-tions of the concentric arrangement of mesophyll and bundle sheath cells of certain grasses and sedges prompted Halberland to compare the mesophyll layer to a Kranz (wreath-like) structure. The structure of monocotyledon-ous foliage leaves depends to a large extent on the type of photosynthesis (i.e. C3; C4) and on the environmental conditions that the plants grow in (i.e. xerophytic, mesophytic or hydrophytic). Most monocotyledonous foliage leaves are basically parallel-veined, but large numbers of cross-veins serve to interconnect the parallel vein system. Parallel veins in mono-cotyledons are classified as large, intermediate or small. 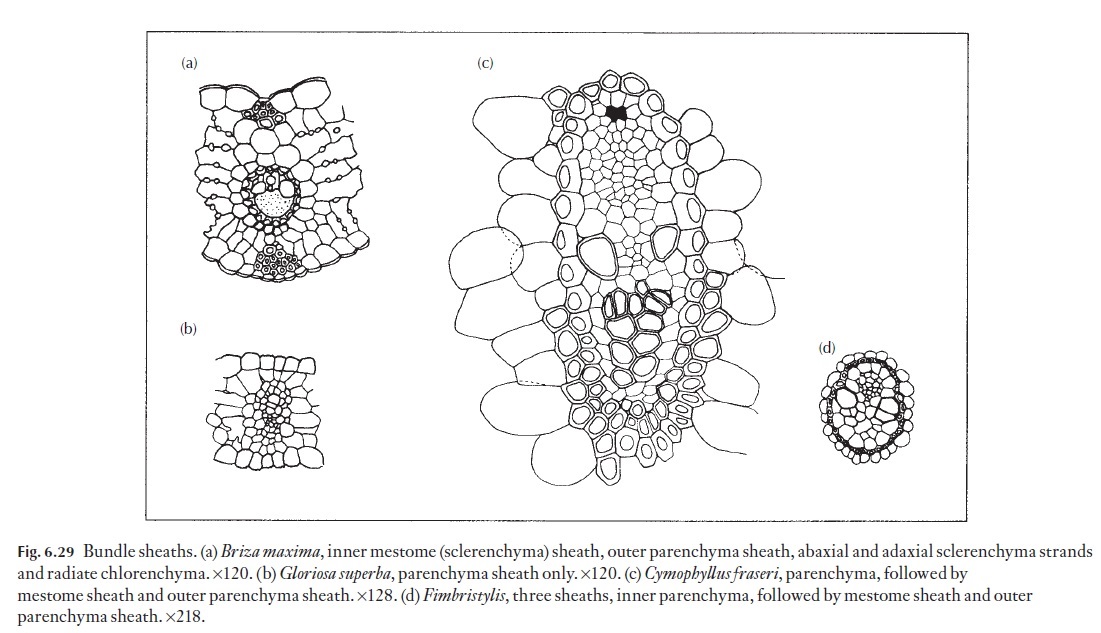 The monocotyledons are more diverse and although many of them have the type of vascular bundle orientation described above, others have very different arrangements. In grasses, three orders, or classes, of vascular bundle can be recognized within the leaf blade:

1   First order, or large bundles. These bundles are characterized by thepresence of large metaxylem vessels on either side of the protoxylem, which is often represented by a lacuna. Obliterated protophloem is evident on the abaxial side of the metaphloem sieve tubes, but is usually obliterated and non-functional in mature leaves. Sclerenchyma girders or strands may extend from these bundles, to the adaxial and abaxial epidermis.

2   Second order, or intermediate bundles. These bundles lack large meta-xylem vessels and protoxylem lacunae, but may contain both proto- and metaphloem sieve tubes. Intermediate bundles can be supported by hypoder-mal sclerenchyma strands or girders that occur either on the ad- and abaxial sides of the vein, or on one side only. In the grasses and sedges, intermediate vascular bundles typically occur between successive large bundles.

3   Third order, or small bundles. Besides lacking large metaxylem orprotoxylem lacunae, these bundles lack protophloem and are not normally associated with either hypodermal strands or girders and are embedded within the mesophyll. 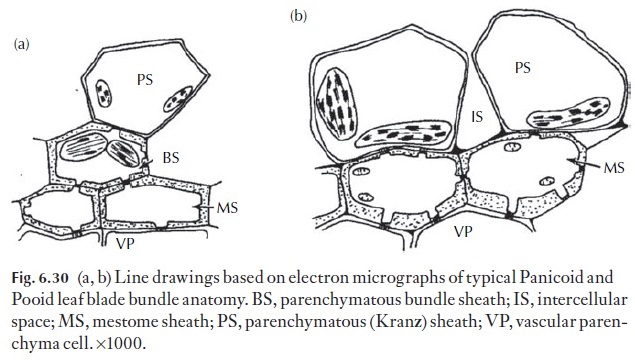 Instead, these cells are associated with the initial incorporation of CO2 as aspartate, which is transported to the bundle sheath cells, via numerous plasmodesmata, where malate or aspartate is decarboxylated, and the liber-ated CO2 is immediately incorporated via Rubisco, into the Calvin cycle. Panicoid grasses are thus C4 photosynthetic species. In many Panicoid spe-cies, an additional cell layer exists between the bundle sheath and the vascu-lar tissues below. This layer, which consists of thick-walled lignified cells, is termed the mestome sheath. Ontogenetically, the mestome sheath is derived from the procambium. Mestome sheath cells may either completely surround the vascular tissue, or surround the phloem tissue only within the vascular bundles. The middle lamella between the bundle sheath cells and, in some species that between the mestome sheath cells contains a suberized layer, is termed the suberin lamella. The compound middle lamella has been shown to restrict the movement of solutes, forcing transport (i.e. pho-toassimilate inwards and water outwards) to take an entirely symplastic route, via plasmodesmata there. The suberin lamella may have important ecological consequences, preventing the excessive movement of water from the apoplast, under conditions of water stress. Pooid grasses, like the Pani-coid species, may be associated with a mestome sheath (Fig. 6.30b). Unlike the Panicoid grasses however, the Pooid species do not exhibit chloroplast polymorphism, do not have compartmentalized Rubisco activity and all follow the C3photosynthetic pathway.

Whilst monocotyledonous foliage leaves are generally described as being parallel-veined, large numbers of transverse veins exist within the leaf blade. Figure 6.31 is an electron micrograph of a transverse vein in the leaf blade of Saccharum offi cinarum. In some cross veins, the radial walls of the parenchymatous element may contain a well-developed suberin lamella, which as stated, may have a regulatory role in solute loading and water loss from the xylem to the mesophyll. 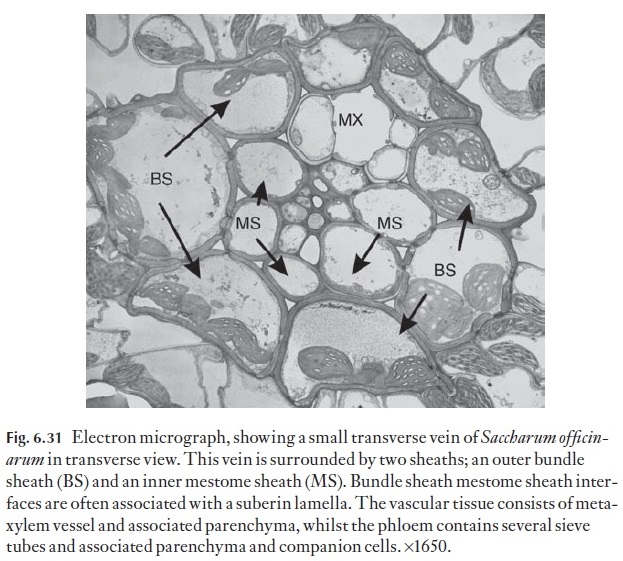 The phloem and xylem are not the only tissues present in the veins. They form the central core, around which sheaths of specialized cells are formed, which separate the vascular tissues from the mesophyll. Two principal types of sheath exist, namely sclerenchymatous and parenchymatous sheaths. There may also be parenchyma associated with the phloem or xylem, and the phloem may contain fibres.

Sclerenchymatous sheaths are composed of fibres and/or sclereids. Some-times the walls of these cells that face the phloem or xylem are more heavily thickened than the others, as is the case in some sedges. The parenchyma sheath is normally composed of much larger and wider cells, with thinner and (usually) relatively unlignified, walls. If both types of sheath are pres-ent, the sclerenchyma sheath is usually innermost. In grasses, this inner lignified sheath is referred to as a mestome sheath. In some genera and spe-cies, an additional sheath may be present – an inner parenchymatous sheath, which is in turn, surrounded by an intermediate, sclerenchymatous sheath and an outer parenchymatous sheath. When present, the inner parenchy-matous sheath in leaf blade bundles of some sedges may contain large, agranal chloroplasts. This anatomical form is found in Fimbristylis, a mem-ber of the Cyperaceae, and indicates the presence of the Kranz syndrome, and that C4 photosynthesis may be present. Named examples of the various types of sheath are illustrated in Fig. 6.29.

Anatomically, there are distinct similarities between the C4 Cyperaceae and C4 Panicoid Poaceae. Like the Poaceae, the Cyperaceae are photosyn-thetically either C3 or C4 and the phloem within the leaf blade vascular bundles contains two types of sieve tube – early, thin-walled sieve tubes and late-formed thick-walled metaphloem sieve tubes, which are generally in close spatial association to the metaxylem, and lacking companion cells. The major differences in Cyperaceae compared to Poaceae lies in the distri-bution of the chloroplast-containing parenchyma surrounding the phloem (termed the border parenchyma in the literature) in the vascular bundles, and in the shape, and thickness of the walls of the cells which have been equated to the mestome sheath of grasses (Fig. 6.32). Four variants of Kranz anatomy occur in the Cyperaceae. Of these, three of these anatomical types (fimbristyloid, chlorocyperoid and eleocharoid) are unique among taxa with C4 photosynthesis in that the photosynthetic carbon reduction tissue (PCR, functional equivalent of bundle sheath) is located within the vascu-lar strand and is separated from the primary carbon assimilation tissue (PCA, positional equivalent of mesophyll) by the mestome sheath layer. In the rhynchosporoid group, the PCR tissue is located in the position of the 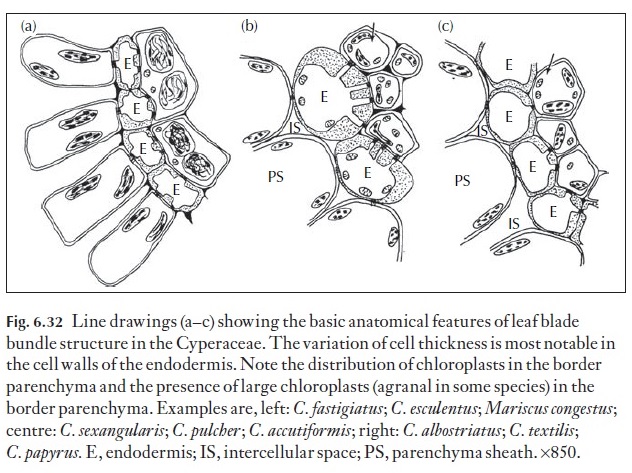 mestome sheath (Soros & Dengler 2001). Suberin lamellae may be present in either outer tangential and/or inner radial and tangential walls of the sheath layer. In C4 species, chloroplasts within the border parenchyma, are large and obviously agranal. The border parenchyma zone commonly encircles both xylem and phloem, or only the phloem.

Chloroplast dimorphism and the lack of grana in the primary carbon reduction (PCR) cells are indicative of the C4 syndrome. Experimental evidence exists for the positive localization of Rubisco in these large, agranal chloroplasts. 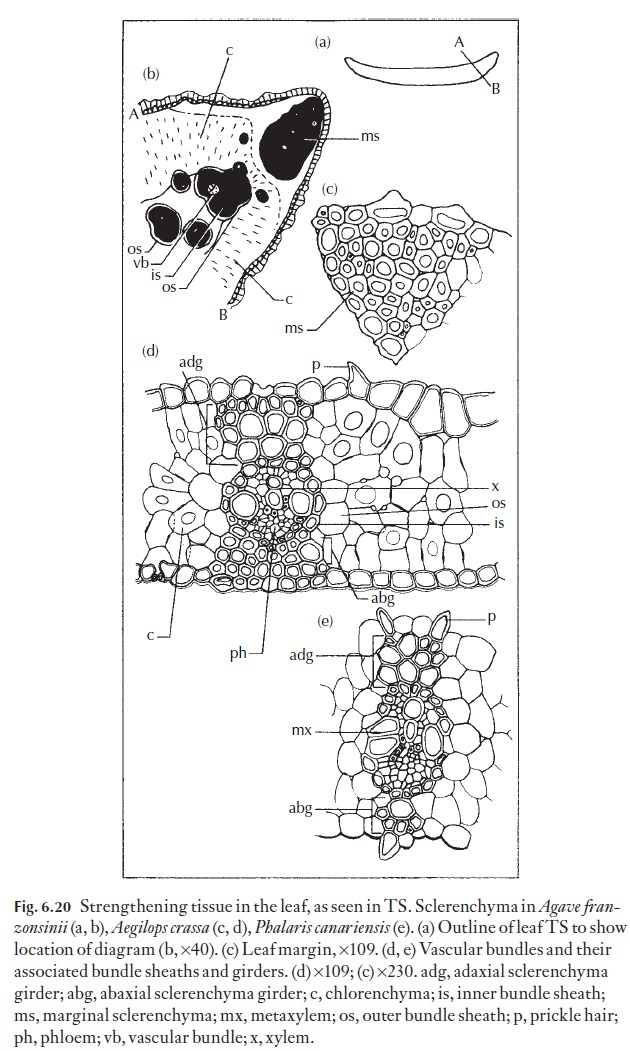 There may be adaxial or abaxial extensions (hypodermal collenchyma-tous or sclerenchymatous strands) to the sheaths, reaching towards, or in contact with either epidermis. The outline of these girders as seen in trans-verse section can be used to distinguish species in some groups. In some plants, subepidermal strands of fibres may be present in line with vascular bundles. In a number of genera a hypodermis is present, composed of one or more layers of cells and occurring to the inside of the epidermis. The cells usually differ in shape or degree of wall thickening from both epidermis and mesophyll. It is a useful diagnostic feature. Its presence is often associ-ated with plants adapted to grow in dry parts of the world.

Whilst few leaves contain a true endodermis, such as that which surrounds the vascular bundles in Gymnosperms such as Pinus, there are some families within which an endodermis-like or ‘endodermoid layer’ can be recognized. As with a true endodermis, the cells making up an endodermoid layer may contain a suberin lamella, which is present at least in the outer tangential and radial walls of these cells. The presence of Casparian strips and or sub-erin lamellae have led to the cells being incorrectly being termed ‘mestome sheath’. Among the Cyperaceae (Fimbristylis, Pycreus, Eleocharis) there are species that show good examples of well-developed endodermoid sheaths, which appear exarch to the inner ‘Kranz’ mesophyll, which is completely opposite to the situation in C4grasses which display double-sheathed Kranz anatomy, where the mestome sheath is centripetal to the outer bundle sheath!