The main control of water movement is provided by stomata.

The main control of water movement is provided by stomata. These consist of a pair of guard cells (often kidney-shaped) with a pore between them. The size of the pore is regulated by changes in shape of the guard cells, and is under active control, unless the plant is so dehydrated that it wilts. As hydraulic pressure is altered, the cells deform in a regulated way, aided by specialized, uneven wall thickening. When plants wilt, the stomata may open, and this can lead to damage.

Stomata may be present on both surfaces (amphistomatic), or only on the upper (hypertomatic) or only on the lower (hypostomatic) surface. They may occur at the same general level as surrounding epidermal cells, or they may be sunken below the general surface of the leaf as in cycads. In broad-leaved plants, stomata tend to have a scattered distribution, whilst innarrow leaved species, stomata are generally arranged in rows which are parallel to the longitudinal axis of the leaf blade. In some xerophytic plants (e.g. Nerium oleander) stomata are sunken beneath the abaxial leaf surface within stomatal crypts. In some angiosperms with aerial leaves, the distri-bution may vary from species to species, depending to some extent on the degree of xeromorphy or mesomorphy. They are characteristically absent from submerged aquatic leaves, but are present on the upper surface of float-ing leaves, for example Nymphaea and Victoria.

As mentioned, stomata may be superficial, that is, with the guard cells level with the surface of the leaf, or sunken, with a small outer chamber above the guard cells. Although many xerophytes have sunken stomata, and the majority of mesophytes superficial stomata, this is not invariably the rule. There may be particular adaptive advantages in each arrangement under certain circumstances; it may not be clear why some apparently ‘unadapted’ species survive while others around them are modified to a greater or lesser degree, but the timing of leaf emergence and their fall, or physiological adaptations, for example, may also play a part.

Of great interest to the taxonomist, or to the person wishing to identify a small leaf fragment, is the arrangement of subsidiary cells where these are present. Some of the various common types are illustrated in Fig. 6.11. Those stomata that lack subsidiary cells are called anomocytic, where the cells surrounding each stoma are not recognizably different or distinct from the remaining cells in the mature epidermis. Such stomata occur in the Ranunculaceae, for example. Stomata with two subsidiary cells, one at either pole, are called diacytic; Justicia and Dianthus species have such sto-mata. Stomata with two subsidiary cells, one on either flank (i.e. laterally), are termed paracytic; these occur in for example,Juncus, Sorghum, Carex and Convolvulus species. The paracytic type also includes species with a number of subsidiary cells in a parallel arrangement on either flank. Tetracytic stomata, with four subsidiary cells, can be seen readily in Trades-cantia; here one cell occurs on either flank and one at either pole. If there arethree cells of unequal size surrounding the guard cell pair the stoma is called anisocytic, as in Plumbago and members of the Brassicaceae. Cyclocytic sto-mata have a ring of subsidiary cells of approximately equal size and in which the individual cells are not very wide, whereas in the actinocytic type the subsidiary cells radiate strongly. Naturally enough, there can be intermedi-ate forms that cannot easily be classified. Aberrant forms are also frequent, for example, two paracytic stomata may share one of the subsidiary cells. 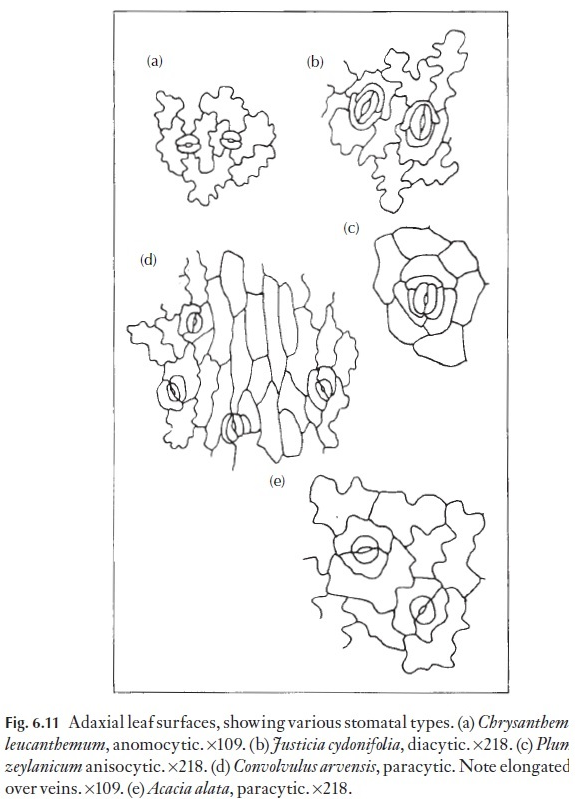 Although occasional species exist which have several types of stomata on a leaf, most have one type only. This means that by noting the type of stoma present, the identity of a plant can be narrowed down. Of course, many families share the more common paracytic and tetracytic types, so the combination of all characters available must be seen to fit with reference material before identification can be made. There are other stomatal types, and indeed the ferns provide some interesting forms, the polocytic with the guard cell pair towards one end of a single subsidiary cell and the mesocytic type, where the guard cell pair is in the centre of a subsidiary cell are two such examples.

It is all too easy to think that some forms of arrangement of subsidiary cells must be primitive, and some more advanced. By speculating, phyloge-netic sequences can be postulated, and interrelationships suggested. One great danger in doing this arises because a mature stomatal type may be formed by more than one developmental sequence in different groups of plants. Perhaps we need two systems of naming stomatal types, the first taking into account the mature form and used only for identification, and 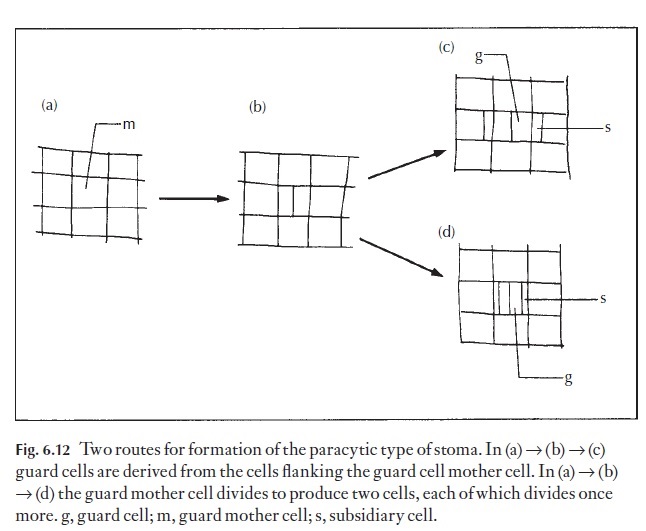 the second derived from a study of the ontogeny of the stomata and used by the phylogeneticist or taxonomist. Figure 6.12 shows two possible ways by which paracytic stomata may arise. In the first route the guard cell mother cell (meristemoid) divides first to produce two cells, then each of the flank-ing cells divides to form one subsidiary cell. The second pathway involves the division only of the guard cell mother cell. Two flanking cells may divide to form one subsidiary cell each, either before or after division of this cell.

Sometimes mature stomata may appear at first sight to have no subsidiary cells. A study of the early stages of development could show that cells sur-rounding the guard cell mother cell divide in a particular way that differs from that which normally occurs among the other epidermal cells. Many aloes appear to have four subsidiary cells, whereas up to eight cells may sur-round the stomata. These subsidiary cells have oblique anticlinal walls. Most other cells in areas not adjacent to stomata have transverse walls. The oblique walls are the product of additional divisions in cells next to the guard cell mother cell.

Sometimes stomata are specialized to exude droplets of liquid water. They may simply be ‘giant’ stomata, larger than the others on the leaf, as in some members of Anacardiaceae. They might be specialized, and elevated at the end of a small mound situated at the termination of a small veinlet. Structures through which droplets of water may exude but which have non-functional guard cells are called hydathodes. Salt glands are a type of hyda-thode modified for the exudation of salt water. They are often surrounded by an encrustation of salt. Examples of hydathodes may be found in saxi-frages and salt glands in Limonium (Fig. 6.13). 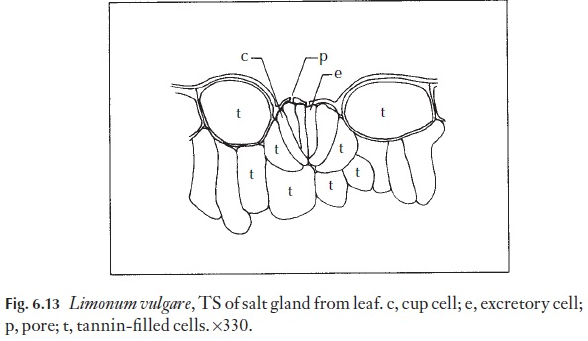 Crystals and silica bodies can occur in the epidermis but for convenience will be described in the ‘mesophyll’ section.