Primary phloem and xylem may contain sclereids and fibres. Primary xylem is composed of protoxylem, in which the tracheary elements usually have helical (spiral) or annular wall thickenings.

Primary phloem and xylem may contain sclereids and fibres. Primary xylem is composed of protoxylem, in which the tracheary elements usually have helical (spiral) or annular wall thickenings. In metaxylem the wall thicken-ings can be more extensive, and breached by pits (with membranes) arranged in scalariform, alternate, reticulate or less regular ways. The pro-toxylem has to be capable of considerable extension, without breaking, dur-ing the first phases of primary growth in length of the stem. However, the elements often do rupture, leaving a protoxylem canal, termed a lacuna. The more rigid metaxylem matures after this extension phase and as a con-sequence is less liable to damage. Its structure does not have to allow for axial extension.

It is often difficult to decide if the protoxylem and those metaxylem frac-tions with annular or spiral thickenings are tracheids or vessel elements, because perforation plates can be very obscure and may even appear to be present in damaged, macerated preparations when they are, in fact, absent. Even with cells which have scalariform, alternate or reticulate pitting it may be hard to be certain if they are perforated or not, since perforations may be very small. This is of some importance, however. It is now widely believed that the narrow elongated imperforate tracheid is ancestral to the wider, shorter perforate vessel element. Therefore, plants which are vessel-less are thought to have primitive wood. The hinge of many phylogenetic systems swings on this delicate frame. Several methods are employed to try and determine if a cell is perforate or not. The tissues are usually macerated to separate the individual cells. These can then be examined with phase contrast illumination, when intact pit membranes show up well. Another

method involves flooding the macerate with Indian ink, on a microscope slide. A coverslip is placed over the cells and gently tapped. The ink is then replaced by 50% glycerine, drawn under the coverslip using filter paper from the opposite side. The Indian ink contains solid particles, and if the cells are perforate, particles should be visible inside the lumina of the vessel elements.

More recently, macerated cells have been examined using the SEM, where membranes are readily observed. As with primary phloem, no radial system of cells is present in primary xylem, but fibres or sclereids and, occa-sionally, parenchyma cells can be present.

The central ground tissue or pith is composed of cells which are usually parenchymatous, with simple, more or less circular pits in their walls. The walls may be thin, and composed largely of cellulose, or thickened with lignin. This matrix of cells can in various plants contain sclereids, tannin cells or crystalliferous cells, or combinations of the three.

Certain groups of plants have special cells or tubes containing latex. Lan-dolphia has latex cells; most Euphorbiaceae have latex tubes. In instanceswhere members of the Cactaceae and Euphorbiaceae have evolved to appear similar externally, it is very easy to distinguish the two anatomically. These plants of dry areas have only to be cut: latex will ooze from all the euphor-biaceous representatives and very few of the Cactaceae and the liquid is watery not latex. Incidentally, this latex in euphorbs can be poisonous and irritating to the skin, and even lethal. Many members of the Compositae (Asteraceae) contain latex andTaraxacum was even grown experimentally in search of a Hevea substitute for rubber latex during the Second World War. Hevea brasiliensis itself is probably the best-known latex producer. Among the monocotyledons, many members of the Alismatales contain latex canals with a secreting epithelial layer.

Latex tubes are among the longest cells and are usually coenocytes, that is long tube-like structures, with several to many nuclei; they often go on growing during the whole life of a plant.

Because the incidence of latex-forming cells or tissues is restricted in the angiosperms and, further, because there are various types of cell, tube or canal, and since the laticifers can be articulated or unicellular, their pres-ence in a plant can be a great help in identification. Also, the distribution of these cells or tissues in cortex, phloem, xylem or ground tissue can be diagnostic.

The centre of the pith may be composed of parenchymatous cells, or it may be hollow, either as a single tube, or variously divided by transverse or longitudinal septa. The cells in the septa or diaphragms can be of a simple, more or less isodiametric type, or they may be stellate or armed or branched 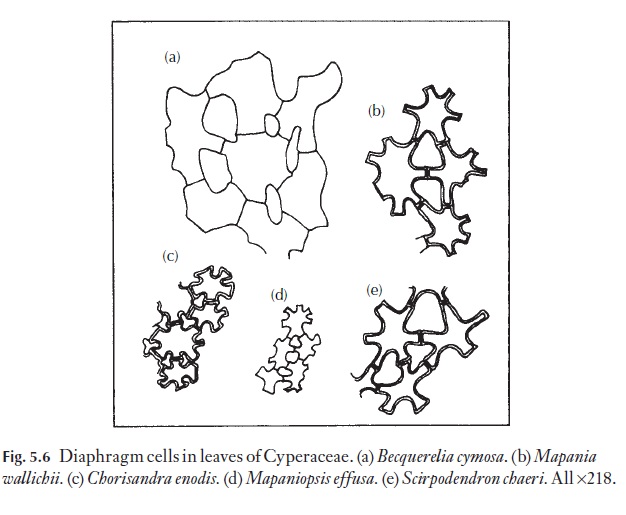 cells of various descriptions. A range of such cells (from leaves) is shown in Fig. 5.6. Diaphragmed or chambered pith may be diagnostic of some genera such as Juglans (walnut) and Sambucus (elderberry) or species such as Phytol-acca americana(pokeweed).