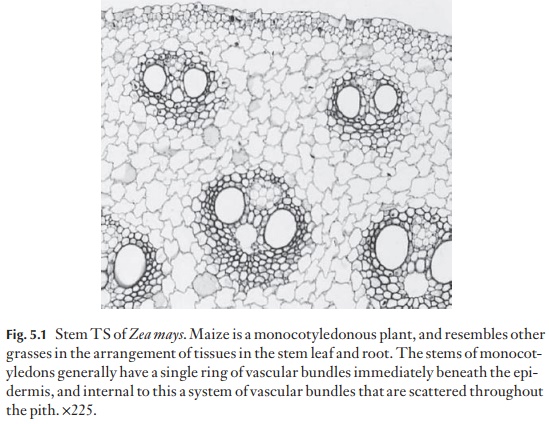 The primary stem, together with the tissues making up the first stages of secondary thickening, is considered here.

The primary stem, together with the tissues making up the first stages of secondary thickening, is considered here. The primary stem, like the root, has an epidermis and cortex, but often a distinct boundary layer such as the endodermis is not visible. An exodermis is rare, but a hypodermis is fre-quently present. Sometimes there is a layer that looks like an endodermis, but this normally lacks the Casparian strips, and is normally called an endo-dermoid sheath or starch sheath. The vascular system follows, and this starts off as individual vascular bundles in both monocots and dicots. Unlike the root, the protoxylem poles are directed towards the centre and the protophloem poles to the outer side in most cases. The centre is often parenchymatous ground tissue, but may be hollow. Again, unlike roots, the vast majority of species have stems with nodes, where leaves emerge and axillary buds may be present; there are variations in the monocots. Buds and lateral shoots arise in the outer tissues (exogenous), unlike lateral roots which are endogenous. In the following account, terms are explained, and some of the rich variety of stem anatomy is discussed.

Most dicotyledonous plants and gymnosperms, including annuals and even ephemerals, exhibit a degree of secondary thickening in their stems. This can start very early on, and may appear a few centimetres below the shoot apex. The secondary xylem and the secondary phloem are described in more detail. It is easy to overlook that different parts of a plant are of different ages, and show varying degrees of secondary develop-ment. Students are thus cautioned, to ensure that comparative studies are carried out on material of comparable ages, when making comparisons between species.

An epidermis delimits primary stems, which is often very similar to that of the leaf of the same species. This is followed internally by cortical tissues, the outer layers of which, together with the guard cells in the epidermis, may contain chloroplasts. Chloroplasts in the epidermal cells are extremel rare in the seed plants except for the guard cells.

This is a character which separates them from the ferns. Some cells acting as a physiological bounda-ry between the cortex and stele are often present, forming a cylinder (endo-dermoid sheath, starch sheath). They may be morphologically distinct as a true endodermis, but are generally thin-walled, axially elongated paren-chyma cells and sometimes they cannot be discerned as a separate layer.

Strengthening tissues can be present in the cortex or around the periph-ery of the stele (usually associated with the phloem), or in both positions. These tissues are usually in the form of axially arranged, rod-like groups of cells (fibres, and sometimes axially elongated sclereids), with gaps between them. Only in stems with very limited growth in thickness do they form a complete cylinder, and this only when primary and secondary growth have ceased. A good example of the latter is to be found in Pelargonium species, where the inner limit of the cortex is clearly demarcated by a ring of scleren-chymatous perivascular (= surrounding the vascular region) fibres. 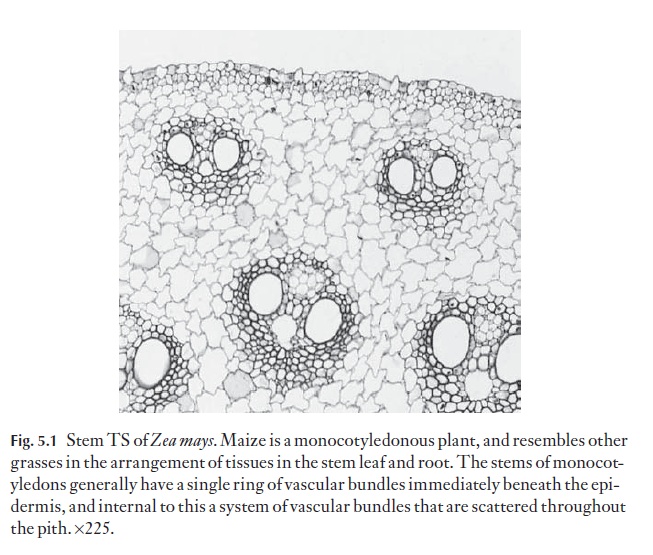 The vascular bundles can take up a variety of arrangements. In dicotyle-dons and gymnosperms, they usually occupy one ring, just to the inner side of the cortex. In monocotyledons they may form one ring, or may appear to be scattered in several to many rings, or lie without apparent order in the central ground tissue (Fig. 5.1). The possession of several rings of vascular bundles is not the prerogative of monocotyledons. Several families of

dicotyledons have this type of arrangement, notably those with climbing members, and also in the Piperaceae.

When vascular bundles are not scattered, the centre of the stem is usually parenchymatous, the cells are often thin-walled but rarely may be lignified in mature stems in some species. This central, pith-like region may contain some sclereids or parenchyma cells with thickened (lignified) walls. In some plants the central parenchyma breaks down to form a canal. Diaphragms of specialized stellate cells may traverse such canals, and in some plants axially arranged diaphragms are also present.

Most dicotyledonous stems have nodes, where leaves are attached and with leaf gaps in the axial vascular system. Leaf gaps become more apparent when some secondary thickening occurs. Each leaf usually has a bud in its axil. If the axillary bud develops, a branch gap is formed also. The inter-nodes do not normally bear buds, unless these arise adventitiously. Mono-cotyledons have a range of types of shoot organization. They may have nodes where leaves are attached, as in grasses and sedges, or no formal node may be discernible in the internal structure, although the leaves appear to be attached to the stem in a similar way to those of the nodal plants when viewed from the exterior, as in palms, and axillary buds are usually present. Because there is no cambium developed within or between the individual vascular bundles in monocotyledons, no leaf or branch gaps form. Because anatomy and gross morphology are so closely related, it is important to study the morphology of a plant as a whole organism before cutting it up to look at the cells and tissues. Indeed, for intensive and comprehensive stud-ies, development should also be followed. Only if you examine morphology and development is it possible to be sure that you can locate similar parts of various species for comparative anatomical studies.