The SOS Response in E. coli

When bacteria are subjected to extreme conditions and a great deal of DNA damage occurs, the normal repair mechanisms are not up to the task of repairing the damage.

The SOS Response in E. coli

When bacteria are subjected to extreme conditions and a great deal of DNA damage occurs, the normal repair mechanisms are not up to the task of repairing the damage. Prolonged exposure to ultraviolet light can do much damage to bacterial DNA. However, bacteria have one last card to play, which is called, appropriately, the SOS response. At least 15 proteins are activated as part of this response, including the mysterious DNA polymerase II. Another important protein is called recA. It gets its name from the fact that it is involved in a recombination event. Homologous DNA can recombine by a variety of mechanisms. Suffice it to say that DNA sequences exist that can be used to cross one strand over another and replace it. Part (a) of the figure shows how this might work. If there is a lesion too complex for the normal repair enzymes to function, a gap is left behind during replication because DNA polymerases could not synthesize new DNA over the lesion.

However, the other replicating strand (shown in blue) should have the correct complement. RecA and many other proteins recombine this section of DNA to the lower strand. This leaves the upper strand without a piece of DNA, but it, too, has its correct complement (shown in red), so DNA polymerases can replicate it. 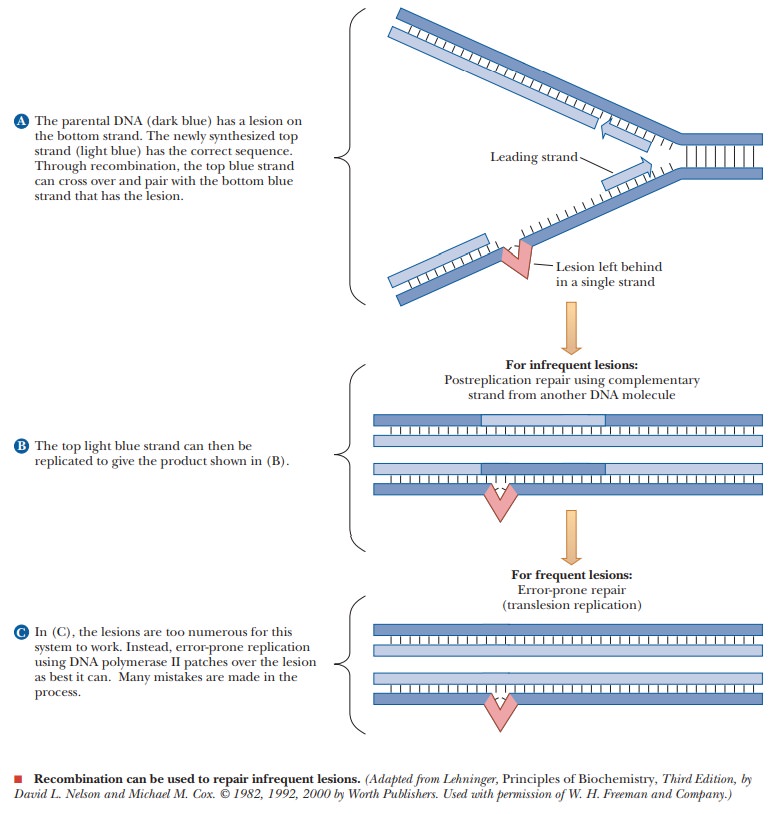 If the damaged strand has too many lesions, DNA polymerase becomes involved in error-prone repair. In this case, the DNA polymerase continues to replicate over the damaged area, although it can’t really match bases directly over the lesions. Thus, it inserts bases without a template, in essence “guessing.” This goes against the idea of fidelity of replication, but it is bet-ter than nothing for the damaged cells. Many of the replication attempts produce mutations that are lethal, and many cells die. However, some may survive, which is better than the alternative.