Our understanding of replication in eukaryotes is not as extensive as that in prokaryotes, owing to the higher level of complexity in eukaryotes and the consequent difficulty in studying the processes.

Our understanding of replication in eukaryotes is not as extensive as that in prokaryotes, owing to the higher level of complexity in eukaryotes and the consequent difficulty in studying the processes. Even though many of the principles are the same, eukaryotic replication is more complicated in three basic ways: there are multiple origins of replication, the timing must be controlled to that of cell divisions, and more proteins and enzymes are involved. 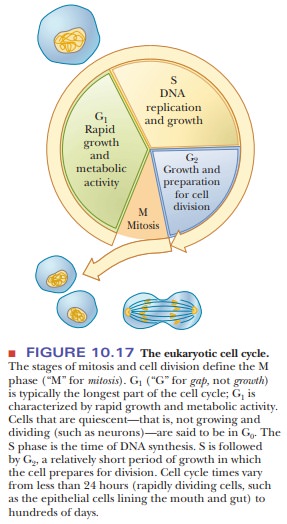 In a human cell, a few billion base pairs of DNA must be replicated once, and only once, per cell cycle. Cell growth and division are divided into phases-M, G1, S, and G2 (Figure 10.17). DNA replication takes place during a few hours in the S phase, and pathways exist to make sure that the DNA is replicated only once per cycle. Eukaryotic chromosomes accomplish this DNA synthesis by having replication begin at multiple origins of replication, also called replicators. These are specific DNA sequences that are usually between gene sequences. An average human chromosome may have several hundred replicators. The zones where replication is proceeding are called replicons, and the size of these varies with the species. In higher mammals, replicons may span 500 to 50,000 base pairs.

How is replication tied to cell division?

The best-understood model for control of eukaryotic replication is from yeast cells (Figure 10.18). Only chromosomes from cells that have reached the G1 phase are competent to initiate DNA replication. Many proteins are involved in the control of replication and its link to the cell cycle. As usual, these proteins are usually given an abbreviation that makes them easier to say, but more difficult for the uninitiated to comprehend at first glance. The first proteins involved are seen during a window of opportunity that occurs between the early and late G1 phase (see Figure 10.18, top). Replication is initiated by a multisubunit protein called theorigin recognitioncomplex (ORC), which binds to the origin of replication. This protein complexappears to be bound to the DNA throughout the cell cycle, but it serves as an attachment site for several proteins that help control replication. The next protein to bind is an activation factor called the replication activator protein (RAP). After the activator protein is bound, replication licensing factors (RLFs) can bind. Yeast contains at least six different RLFs. They get their name from the fact that replication cannot proceed until they are bound. One of the keys to linking replication to cell division is that some of the RLF proteins have been found to be cytosolic. Thus, they have access to the chromosome only when the nuclear membrane dissolves during mitosis. Until they are bound, replication cannot occur. After RLFs bind, the DNA is then competent for replication. The combination of the DNA, ORC, RAP, and RLFs constitutes what researchers call the pre-replication complex (pre-RC). 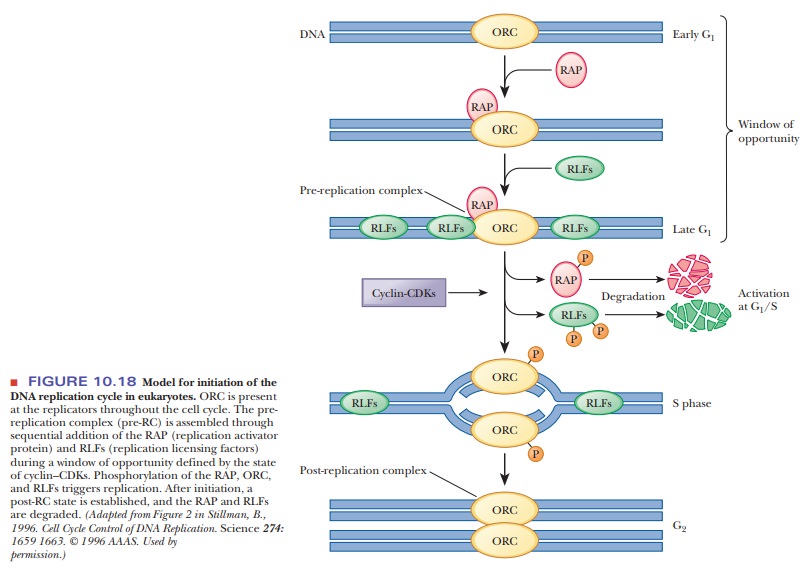 The next step involves other proteins and protein kinases. We learned that many processes are controlled by kinases phosphorylating target proteins.

One of the great discoveries in this field was the existence of cyclins, which are proteins that are produced in one part of a cell cycle and degraded in another. Cyclins are able to combine with specific protein kinases, called cyclin-dependent protein kinases (CDKs). When these cyclins combine with CDKs, theycan activate DNA replication and also block reassembly of a pre-RC after initia-tion. The state of activity of the CDKs and the cyclins determines the window of opportunity for DNA synthesis. Cyclin–CDK complexes phosphorylate sites on the RAP, the RLFs, and the ORC itself. Once phosphorylated, the RAP dissoci-ates from the pre-RC, as do the RLFs. Once phosphorylated and released, the RAP and the RLFs are degraded (Figure 10.18, middle). Thus, the activation of cyclin–CDKs serves both to initiate DNA replication and to prevent formation of another pre-RC. In the G2 phase, the DNA has been replicated. During mitosis, the DNA is separated into the daughter cells. At the same time, the dissolved nuclear membrane allows entrance of the licensing factors that are produced in the cytosol so that each daughter cell can initiate a new round of replication.

At least 15 different polymerases are present in eukaryotes, of which 5 have been studied more extensively (Table 10.4). The use of animals rather than plants for study avoids the complication of any DNA synthesis in chloroplasts. The five best-studied polymerases are called α, β, γ, δ, and ε. The α, β, δ, and ε enzymes are found in the nucleus, and the γ form occurs in mitochondria. 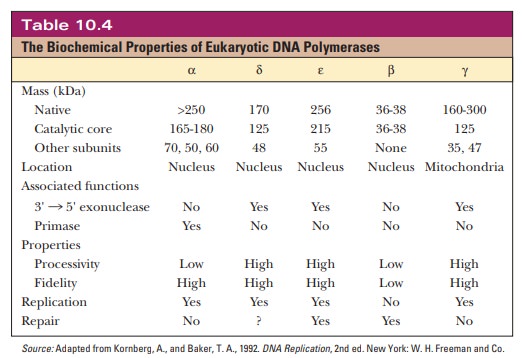 How are eukaryotic polymerases related to prokaryotic ones?

Polymerase α was the first discovered, and it has the most subunits. It also has the ability to make primers, but it lacks a 3' - > 5' proofreading activity and has low processivity. After making the RNA primer, Pol α adds about 20 nucleotides and is then replaced by Pol δ and ε. Polymerase δ is the principal DNA polymerase in eukaryotes. It interacts with a special protein called PCNA (for proliferating cell nuclearantigen). PCNA is the eukaryotic equivalent of the part of Pol III that functionsas a sliding clamp (β). It is a trimer of three identical proteins that surround the DNA (Figure 10.19). The role of DNA polymerase ε is less clear. It may replace polymerase δ in lagging strand synthesis. DNA polymerase β appears to be a repair enzyme. DNA polymerase γ carries out DNA replication in mitochondria.

Several of the DNA polymerases isolated from animals lack exonuclease activity (the α and β enzymes). In this regard, the animal enzymes differ from prokaryotic DNA polymerases. Separate exonucleolytic enzymes exist in animal cells. 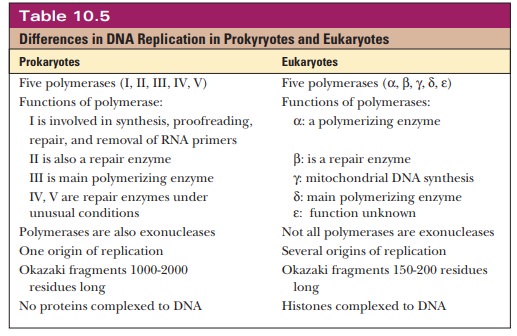 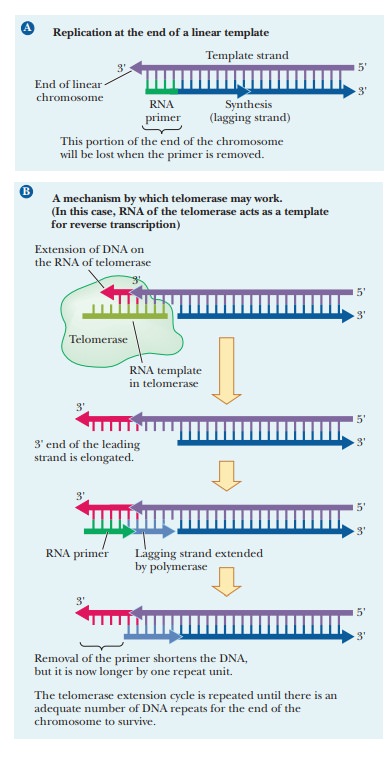 The structures involved at the eukaryotic replication fork are shown in Figure 10.20. The formation of Okazaki fragments (typically 150 to 200 nucleotides long in eukaryotes) is initiated by Pol α. After the RNA primer is made and a few nucleotides are added by Pol α, the polymerase dissociates and is replaced by Pol δ and its attached PCNA protein. Another protein, called RFC (replication factor C), is involved in attaching PCNA to Pol δ. The RNA primer is eventually degraded, but, in the case of eukaryotes, the polymerases do not have the 5'3 3' exonuclease activity to do it. Instead, separate enzymes, FEN-1 and RNase H1, degrade the RNA. Continued movement of Pol δ fills in the gaps made by primer removal. As with prokaryotic replication, topoisomerases relieve the torsional strain from unwinding the helix, and a single-stranded binding protein, called RPA, protects the DNA from degradation. Finally, DNA ligase seals the nicks that separate the fragments. 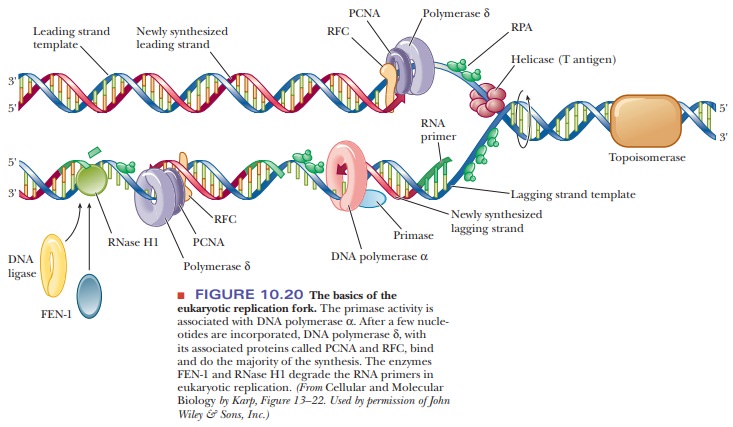 Replication in eukaryotes follows the same general outline as replication in prokaryotes, with the most important difference being the presence of histone proteins complexed to eukaryotic DNA.

Different proteins are used, and the system is more complex than it is in prokaryotes. Replication is controlled so that it occurs only once during a cell-division cycle, during the S phase.

Five different DNA polymerases are present in eukaryotes: α, β, γ, δ, and ε. Polymerase δ is the principal synthesizer of DNA and is the equivalentof Pol III in prokaryotes.