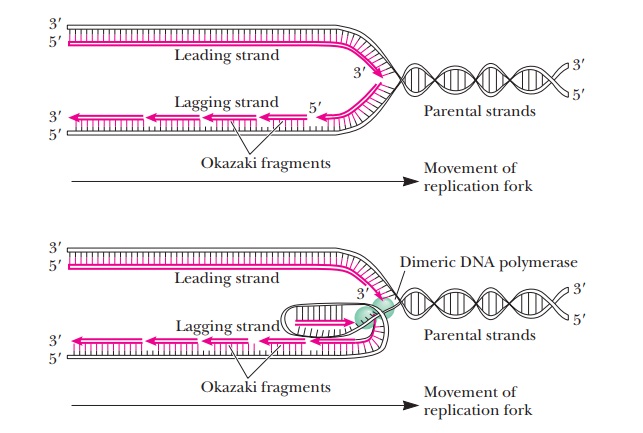 All synthesis of nucleotide chains occurs in the 5' - > 3' direction from the perspective of the chain being synthesized. This is due to the nature of the reaction of DNA synthesis. The last nucleotide added to a growing chain has a 3'-hydroxyl on the sugar. The incoming nucleotide has a 5'-triphosphate on its sugar. The 3'-hydroxyl group at the end of the growing chain is a nucleophile. It attacks the phosphorus adjacent to the sugar in the nucleotide to be added to the growing chain, leading to the elimination of the pyrophosphate and the formation of a new phosphodiester bond (Figure 10.5). We discussed nucleophilic attack by a hydroxyl group at length in the case of serine proteases; here we see another instance of this kind of mechanism. It is helpful to always keep this mechanism in mind. The further in depth we study DNA, the more the directionality of 5' - > 3' can lead to confusion over which strand of DNA we are discussing. If you always remember that all synthesis of nucleotides occurs in the 5' - > 3' direction from the perspective of the growing chain, it will be much easier to understand the processes to come. 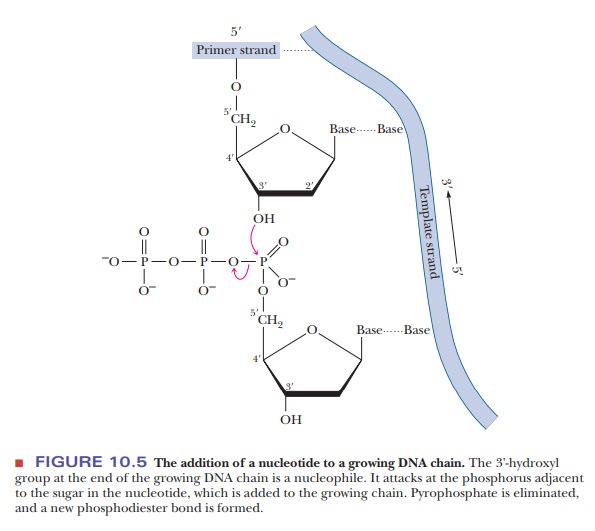 This universal nature of synthesis presents a problem for the cell because as the DNA synthesis proceeds along a replication fork, the two strands are going in opposite directions.

The problem is solved by different modes of polymerization for the two growing strands. One newly formed strand (the leading strand) is formed continuously from its 5' end to its 3' end at the replication fork on the exposed 3' to 5' template strand. The other strand (the lagging strand) is formed semidiscontinuously in small fragments (typically 1000 to 2000 nucleotides long), sometimes called Okazaki fragments after the scientist who first studied them (Figure 10.6). The 5' end of each of these fragments is closer to the replication fork than the 3' end. The fragments of the lagging strand are then linked together by an enzyme called DNA ligase.