At least five DNA polymerases are present in E. coli. Three of them have been studied more extensively, and some of their properties are listed in Table 10.1. DNA polymerase I (Pol I) was discovered first, with the subsequent discovery of polymerases II (Pol II) and polymerase III (Pol III). Polymerase I consists of a single polypeptide chain, but polymerases II and III are multisubunit proteins that share some common subunits. Polymerase II is not required for replication; rather, it is strictly a repair enzyme. Recently, two more polymerases, Pol IV and Pol V, were discovered. They, too, are repair enzymes, and both are involved in a unique repair mechanism called the SOS response Two important considerations regarding the polymerases are the speed of the synthetic reaction (turnover number) and the processivity, which is the number of nucleotides joined before the enzyme dissociates from the template (Table 10.1). 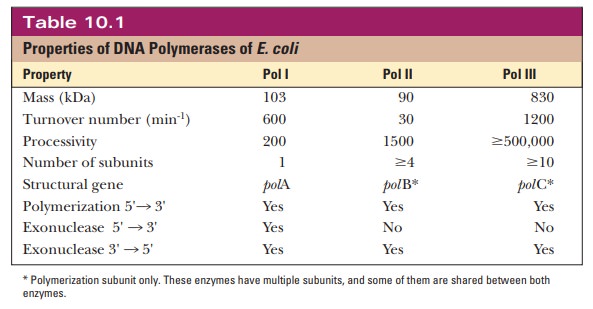 Polymerase III consists of a core enzyme responsible for the polymerization and 3' exonuclease activity-consisting of α-, ε-, and θ-subunits-and a number of other subunits, including a dimer of α-subunits responsible for DNA bind-ing, and the γ-complex-consisting of γ-, δ-, δ', χ-, and ψ-subunits-which allows the β-subunits to form a clamp that surrounds the DNA and slides along it as polymerization proceeds (Figure 10.7). Table 10.2 gives the subunit composi-tion of the DNA polymerase III complex. All of these polymerases add nucleo-tides to a growing polynucleotide chain but have different roles in the overall replication process. As can be seen in Table 10.1, DNA polymerase III has the highest turnover number and a huge processivity compared to polymerases I and II. 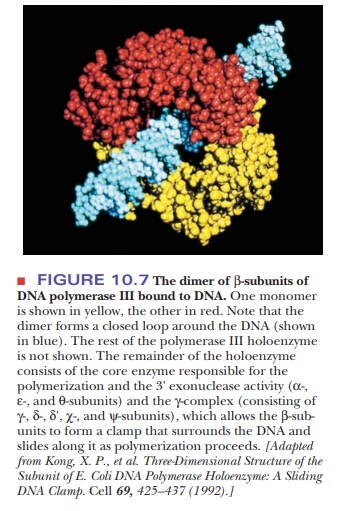 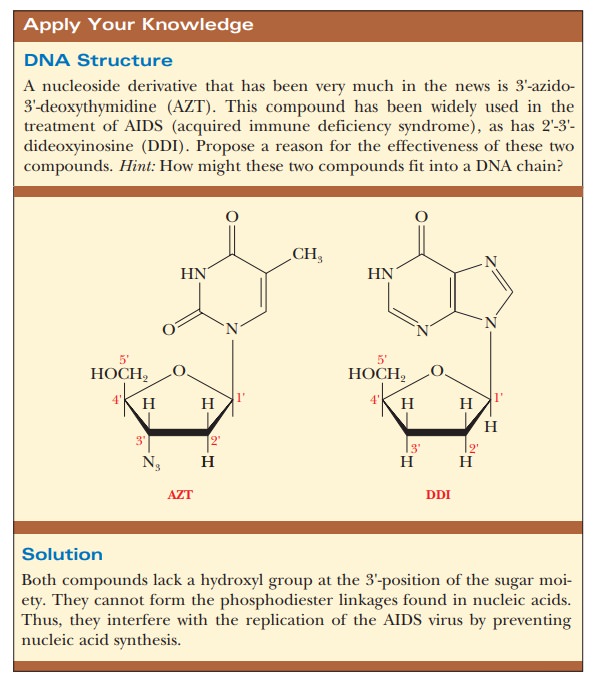 If DNA polymerases are added to a single-stranded DNA template with all the deoxynucleotide triphosphates necessary to make a strand of DNA, no reaction occurs. It was discovered that DNA polymerases cannot catalyze de novo synthesis. All three enzymes require the presence of a primer, a short oligonucleotide strand to which the growing polynucleotide chain is covalently attached in the early stages of replication. In essence, DNA polymerases must have a nucleotide with a free 3'-hydroxyl already in place so that they can add the first nucleotide as part of the growing chain. In natural replication, this primer is RNA.

DNA polymerase reaction requires all four deoxyribonucleoside triphos-phates-dTTP, dATP, dGTP, and dCTP. Mg2+ and a DNA template are also necessary. Because of the requirement for an RNA primer, all four ribonucleo-side triphosphates-ATP, UTP, GTP, and CTP-are needed as well; they are incorporated into the primer. The primer (RNA) is hydrogen-bonded to the template (DNA); the primer provides a stable framework on which the nascent chain can start to grow. The newly synthesized DNA strand begins to grow by forming a covalent linkage to the free 3'-hydroxyl group of the primer.