Replication of linear DNA molecules poses particular problems at the ends of the molecules. Remember that at the 5' end of a strand of DNA being synthesized, there is initially a short RNA primer, which must later be removed and replaced by DNA.

Replication of linear DNA molecules poses particular problems at the ends of the molecules. Remember that at the 5' end of a strand of DNA being synthesized, there is initially a short RNA primer, which must later be removed and replaced by DNA. This is never a problem with a circular template because the DNA polymerase I that is coming from the 5' side of the primer (the previous Okazaki fragment) can then patch over the RNA with DNA. However, with a linear chromosome, this is not possible. At each end is a 3' and a 5' DNA chain. The 5'-end template strand is not a problem because a DNA polymerase copying it is moving from 5' to 3' and can proceed to the end of the chromosome from the last RNA primer. The 3'-end template strand poses a problem, however-see part (a) of the figure. The RNA primer at the 5' end of the new strand does not have any way of being replaced. Remember that all DNA polymerases require a primer and, because nothing is upstream (to the 5' side), the RNA primer cannot be replaced with DNA. RNA is unstable, and the RNA primer is degraded in time. In effect, unless some special mechanism is created, the linear molecule gets shorter each time it is replicated.

The ends of eukaryotic chromosomes have a special struc-ture called a telomere, which is a series of repeated DNA sequences. In human sperm-cell and egg-cell DNA, the sequence is 5'TTAGGG3',and this sequence is repeated more than 1000 times at the end of the chromosomes. This repetitive DNA is noncoding and acts as a buffer against degradation of the DNA sequence at the ends, which would occur with each replication as the RNA primers are degraded. Some evidence shows a relationship between longevity and telomere length, and some researchers have suggested that the loss of the telomere DNA with age is part of the natural aging pro-cess. Eventually, the DNA becomes nonviable and the cell dies. 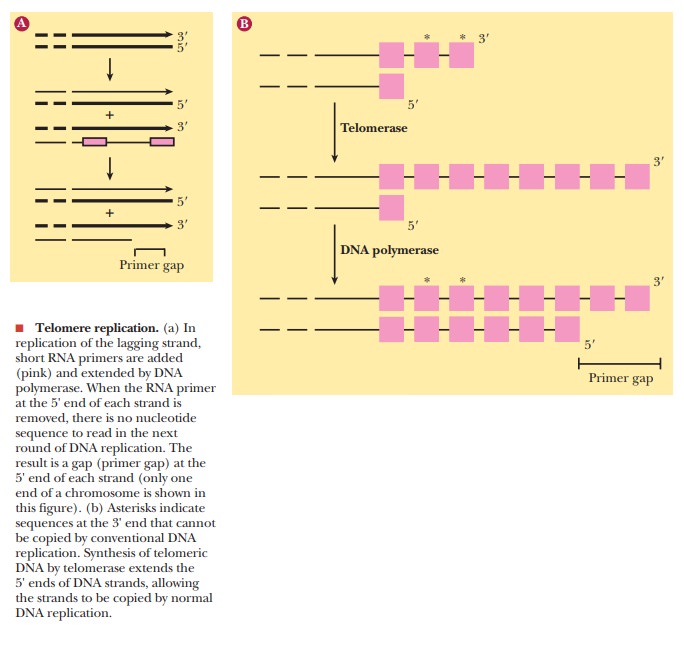 However, even with long telomeres, cells eventually die when their DNA gets shorter with each replication unless there is some compensatory mechanism. The creative solution is an enzyme called telomerase, which provides a mechanism for synthesis of the telomeres-see part (b) of the figure. The enzyme telomer ase is a ribonuclear protein, containing a section of RNA that is the complement of the telomere. In humans, this sequence is 5'CCCUAA3'. Telomerase binds to the 5' strand at the chromo-some end and uses a reverse transcriptase activity to synthesize DNA (shown in red) on the 3' strand, using its own RNA as the template. This allows the template strand (shown in purple) to be elongated, effectively lengthening the telomere.

When the nature of telomerase was discovered, researchers originally believed that it was a “fountain of youth” and that, if we could figure out how to keep it going, cells (and perhaps individuals) would never die. Very recent work has shown that even though the enzyme telomerase does remain active in rapidly growing tissues such as blood cells, the intestinal lumen, skin, and others, it is not active in most adult tissues. When the cells of most adult tissues divide, for replacement or for repair, they do not preserve the chromosome ends. Eventually, enough DNA is gone, a vital gene is lost, and the cell dies. This may be a part of the normal aging and death process. 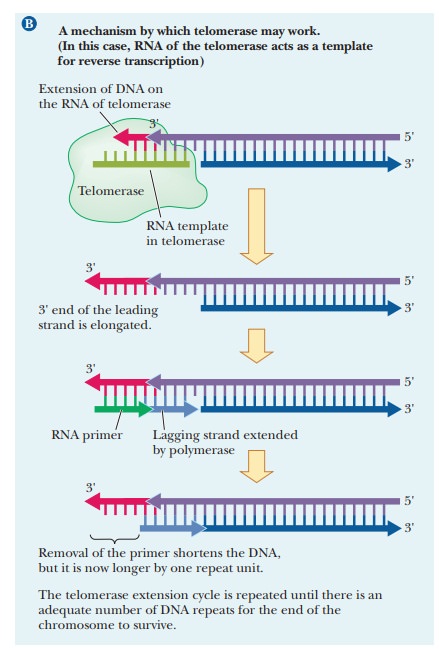 The big surprise was the discovery that telomerase is reac-tivated in cancer cells, explaining in part their immortality and their ability to keep dividing rapidly. This observation has opened a new possibility for cancer therapy: if we can prevent the reactivation of telomerase in cancerous tissues, the cancer might die of natural causes. The study of telomerase is just the tip of the iceberg. Other mechanisms must exist to protect the integrity of chromosomes besides telomerase. Using tech-niques described, researchers have genetically engineered mice to lack telomerase. These mice showed con-tinued shortening of their telomeres with successive replication and generations, but eventually the chromosome shortening stopped, indicating that some other process also conserved the length of the chromosomes. Currently, the relationship between telomeres, recombination, and DNA repair is being studied.