The Role of Electron Transport in Metabolism 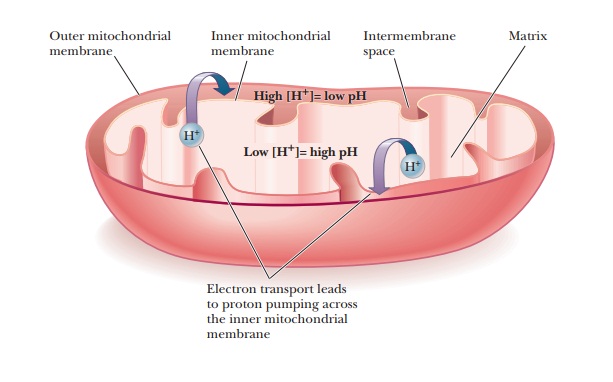 What is the importance of mitochondrial structure in ATP production?

The Role of Electron Transport in Metabolism

Aerobic metabolism is a highly efficient way for an organism to extract energy from nutrients. In eukaryotic cells, the aerobic processes (including conversion of pyruvate to acetyl-CoA, the citric acid cycle, and electron transport) all occur in the mitochondria, while the anaerobic process, glycolysis, takes place outside the mitochondria in the cytosol. The reactions of the electron transport chain take place in the inner mitochondrial membrane. 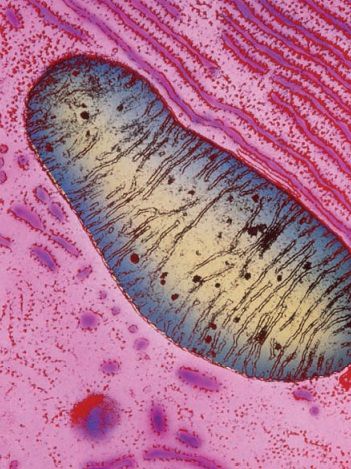 What is the importance of mitochondrial structure in ATP production?

The energy released by the oxidation of nutrients is used by organisms in the form of the chemical energy of ATP. Production of ATP in the mitochondria give ATP. The production of ATP by oxidative phosphorylation (an endergonic process) is separate from electron transport to oxygen (an exergonic process), but the reactions of the electron transport chain are strongly linked to one another and are tightly coupled to the synthesis of ATP by phosphorylation of ADP. The operation of the electron transport chain leads to pumping of protons (hydrogen ions) across the inner mitochondrial membrane, creating a pH gradient (also called a proton gradient). This proton gradient represents stored potential energy and provides the basis of the coupling mechanism (Figure 20.1). Chemiosmotic coupling is the name given to this mechanism. Oxidative phosphorylation gives rise to most of the ATP production associated with the complete oxidation of glucose.

The NADH and FADH2 molecules generated in glycolysis and the citric acid cycle transfer electrons to oxygen in the series of reactions known collectively as the electron transport chain. The NADH and FADH  are oxidized to NAD+ and FAD and can be used again in various metabolic pathways. Oxygen, the ultimate electron acceptor, is reduced to water; this completes the process by which glucose is completely oxidized to carbon dioxide and water. 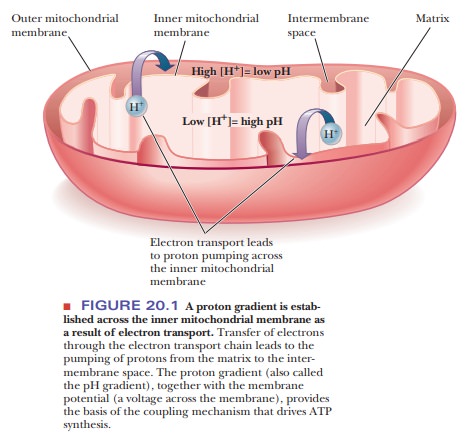 The general outline of the process is that NADH passes electrons to coenzyme Q, as does FADH2, providing an alternative mode of entry into the electron trans-port chain. Electrons are then passed from coenzyme Q to a series of proteins called cytochromes (which are designated by lowercase letters) and, eventually, to oxygen.

Electron transport from one carrier to another creates a proton gradient across the inner mitochondrial membrane. 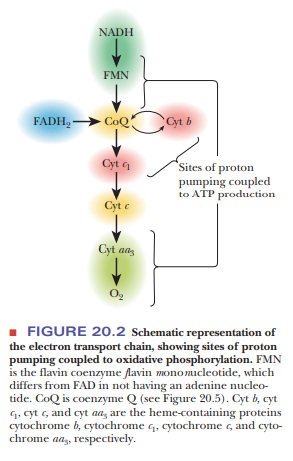