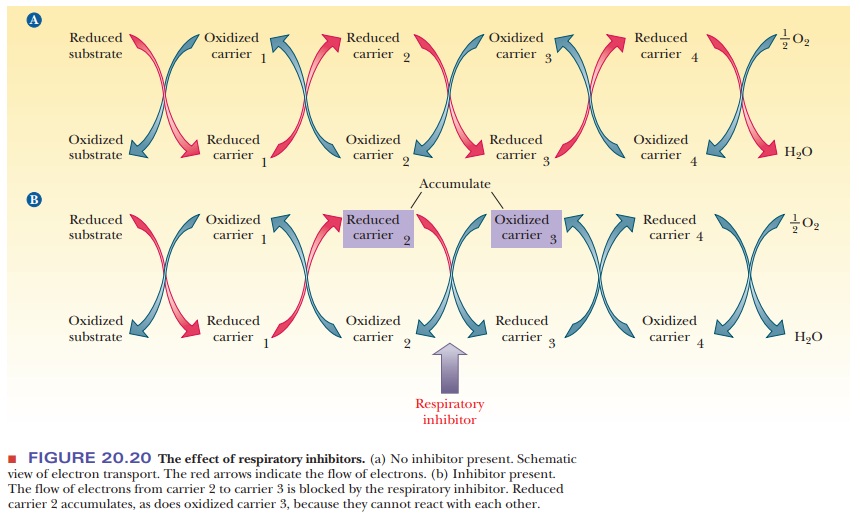 If a pipeline is blocked, a backup occurs. Liquid accumulates upstream of the blockage point, and there is less liquid downstream. In electron transport, the flow of electrons is from one compound to another rather than along a pipe, but the analogy of a blocked pipeline can be useful for understanding the workings of the pathway. When a flow of electrons is blocked in a series of redox reactions, reduced compounds accumulate before the blockage point in the pathway. Recall that reduction is a gain of electrons, and oxidation represents a loss of electrons. The compounds that come after the blockage point will lack electrons and will tend to be found in the oxidized form (Figure 20.20). By using respiratory inhibitors, we can gather additional evidence to establish the order of components in the electron transport pathway. 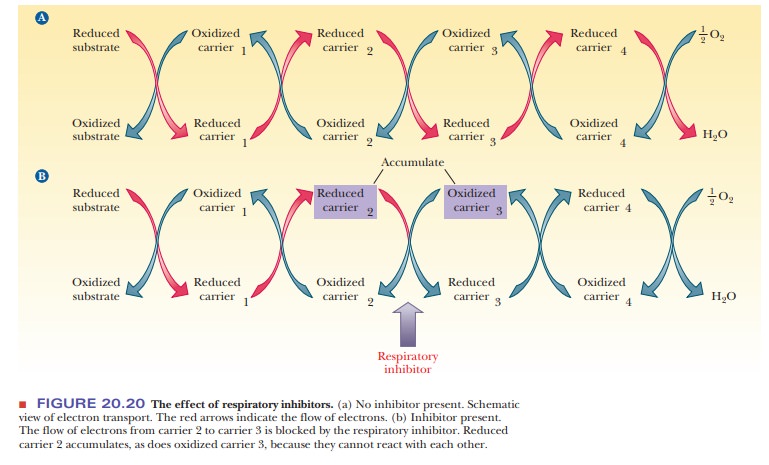 The use of respiratory inhibitors to determine the order of the electron transport chain depends on determining the relative amounts of oxidized and reduced forms of the various electron carriers in intact mitochondria. The logic of the experiment can be seen from the analogy of the blocked pipe. In this case, the reduced form of the carrier upstream (reduced carrier 2) accumulates because it cannot pass electrons farther in the chain. Likewise, the oxidized form of the carrier downstream (oxidized carrier 3) also accumulates because the supply of electrons that it could accept has been cut off (Figure 20.20). By use of careful techniques, intact mitochondria can be isolated from cells and can carry out electron transport if an oxidizable substrate is available. If electron transport in mitochondria occurs in the presence and absence of a respiratory inhibitor, different relative amounts of oxidized and reduced forms of the electron carriers will be present.

The type of experiment done to determine the relative amounts of oxidized and reduced forms of electron carriers depends on the spectroscopic properties of these substances.

The oxidized and reduced forms of cytochromes can be distinguished from one another. Specialized spectroscopic techniques exist to detect the presence of electron carriers in intact mitochondria. The indi-vidual types of cytochromes can be identified by the wavelength at which the peak appears, and the relative amounts can be determined from the intensities of the peaks.

Inhibitors have an effect at three sites in the electron transport chain, and we shall look at some classic examples. At the first site, barbiturates (of which amytal is an example) block the transfer of electrons from the flavoprotein NADH reductase to coenzyme Q. Rotenone is another inhibitor that is active at this site. This compound is used as an insecticide; it is highly toxic to fish, but not to humans, and is often used to kill the fish in a lake before introducing fish of a different species. The second site at which blockage can occur is that of electron transfer involving the b cytochromes, coenzyme Q, and cytochrome c1. The classic inhibitor associated with this blockage is the antibiotic antimycinA (Figure 20.21). More recently developed inhibitors that are active in this part of the electron transport chain include myxothiazol and 5-n-undecyl-6-hydroxy-4,7-dioxobenzothiazol (UHDBT). These compounds played a role in establishing the existence of the Q cycle. The third site subject to blockage is the transfer of electrons from the cytochrome aa3 complex to oxygen. Several potent inhibitors operate at this site (Figure 20.22), such as cyanide (CN–, azide (N3–), and carbon monoxide (CO). Note that each of the three sites of action of respiratory inhibitors corresponds to one of the respiratory complexes. Research is continuing with some of the more recently developed inhibitors; the goal of additional work is to elucidate more of the details of the electron transport process. 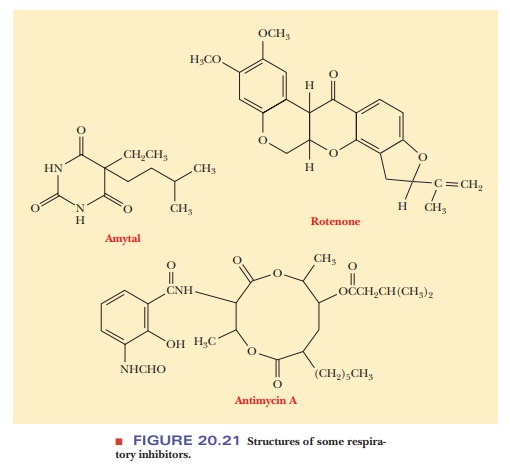 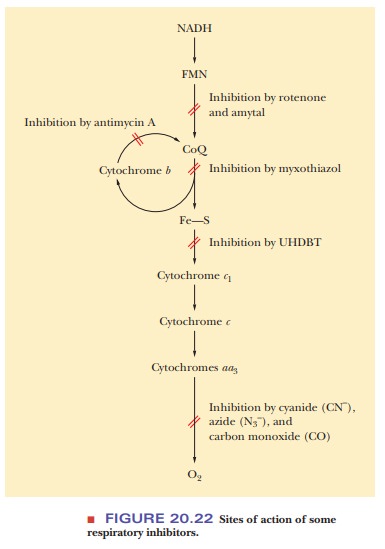 Respiratory inhibitors block the electron transport chain at sites that cor-respond to each of the respiratory complexes.

Experiments on these substances, many of which are highly toxic, were used to determine the path of electrons in respiration.