Trained athletes, especially at the elite level, are more aware of the results of anaerobic and aerobic metabolism than nonathletes.

Trained athletes, especially at the elite level, are more aware of the results of anaerobic and aerobic metabolism than nonathletes. Genetic endowment and training are important to the success of the athlete, but a keen understanding of physiology and metabolism is equally important. To plan nutrition for performance, a serious athlete must understand the nature of metabolism as it relates to his or her chosen sport. A working muscle has four different sources of energy available after a period of rest:

·     Creatine phosphate, which reacts directly with ADP in substrate-level phosphorylation to produce ATP.

·     Glucose from the glycogen of muscle stores, initially con-sumed by anaerobic metabolism.

·     Glucose from the liver, from both its glycogen stores and the gluconeogenesis from lactic acid produced in the muscle (the Cori cycle), again initially consumed by anaerobic metabolism.

·     Aerobic metabolism in the muscle mitochondria.

Initially, all four energy sources are available to the muscle. When the creatine phosphate runs out, only the other sources are left. When muscle glycogen runs out, the anaerobic boost it provided slows down, and when the liver glycogen is gone, only aerobic metabolism to carbon dioxide and water is left.

It is difficult to accurately calculate how much each of these nutrients might supply to a rapidly working muscle, but simple calculations are consistent with there being less than a 1-minute supply of creatine phosphate, a figure that can be compared with the length of time for sprint events, which is typically less than a minute. Creatine supplements for athletes are sold in health food stores, and results suggest that for power lifting or short sprints, such as the 100-meter dash, this supplementation is effective. There is about 10 to 30 minutes’ worth of glycogen in the muscle cells, with this figure varying dramatically based on the intensity of the exercise. Performance in running events ranging in distance from 1500 meters up to 10 kilometers can be heavily influenced by the muscle glycogen levels at the start of the event. Of course, glycogen loading could affect this last figure significantly.

One reason for the difficulty in making these calculations is the uncertainty of what proportion of the liver glycogen is metabolized only to lactic acid and how much is metabolized in the liver. It is known that one rate-limiting step for aerobic metabolism is the shuttling of both NADH and pyruvate from the cytoplasm into the mitochondrion.

In this regard, it is interesting to note that well-conditioned and well-trained athletes actually have a higher number of mito-chondria in their muscle cells. For long-distance events, such as the marathon or road-cycling events, aerobic metabolism certainly comes into play. “Fat burning” is the term frequently used, and it reflects metabolic fact. Fatty acids are degraded to acetyl-CoA, which then enters the citric acid cycle; marathoners and cyclists are known for their notably lean frames, with a minimal amount of body fat. Running a marathon, which takes between

two and three hours for very fit runners, uses more fatty acids, and is done at a lower level of oxygen uptake, than riding in a professional road-cycling event that may take up to seven hours. Clearly, there are differences in metabolism for sports even within the category known as endurance events.

Perhaps the most studied athlete of modern times is cyclist Lance Armstrong. As a young elite rider, he was a world profes-sional road race champion in 1993 and won a few stages of the prestigious Tour de France. He was powerfully built and excelled in time-trial events and single-day road races, but he was never considered a threat in the major stage races because he did not climb the major European mountains very well. After suffer-ing a disappointing Olympic Games in Atlanta in 1996, he was diagnosed with testicular cancer, which had spread to several organs, including his brain. He was given little chance to live, but after several surgeries and intense chemotherapy, he recovered and resumed his cycling career. The hospitalization and chemo-therapy caused him to lose 15 to 20 pounds, and, in 1998, he became not only competitive but also a true challenger again at the World Championships and the Tour of Spain. Cycling fans were surprised at how well he climbed the Spanish Pyrenees, but few suspected that in the next few years he would go on to become the first cyclist to win seven Tour de France titles. Before Armstrong, nobody had ever even won six!

Lance Armstrong was the second American to win this event. He always was an amazing aerobic machine, and, when his metab-olism didn’t have to carry as much weight up the mountains, he was able to climb with the best in the world. Of course, his true strength came from his will to win, which he credits to his ordeal with cancer and his upbringing. 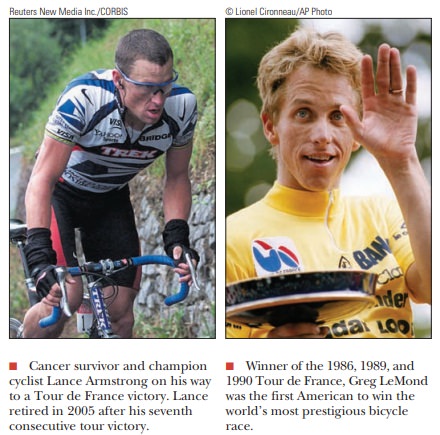 Underscoring the importance of the electron transport chain and mitochondria to the athlete is the story of another great cycling champion, Greg LeMond, who was the first American to win the Tour de France, and he went on to win it a total of three times. Like Lance Armstrong, Greg LeMond also had a tragedy in the middle of his career, a hunting accident. He was shot in the back with buckshot shortly after his first Tour de France victory. Remarkably, he recov-ered and went on to win two more Tours de France. However, he never really felt well again, and he later commented that, even in his final Tour de France victory in 1990, something was definitely wrong. The next few years were disappointing for LeMond and his fans, and he never made it back into the top places of a race. He seemed to be putting on weight and didn’t respond to training. Finally, in desperation, he underwent some painful muscle biopsies and discov-ered that he had a rare condition called mitochondrial myopathy. When he trained hard, his mitochondria began to disappear. He was essentially an aerobic athlete without the ability to process fuels aerobically. He retired from competition shortly thereafter