The Mechanism of Coupling in Oxidative Phosphorylation

What Is chemiosmotic coupling? What Is conformational coupling?

The Mechanism of Coupling in Oxidative Phosphorylation

Several mechanisms have been proposed to account for the coupling of electron transport and ATP production. The mechanism that served as the point of departure in all discussions is chemiosmotic coupling, which was later modified to include a consideration of conformational coupling.

What Is chemiosmotic coupling?

As originally proposed, the chemiosmotic coupling mechanism was based entirely on the difference in proton concentration between the intermembrane space and the matrix of an actively respiring mitochondrion. In other words, the proton (hydrogen ion, H+) gradient across the inner mitochondrial membrane is the crux of the matter. The proton gradient exists because the various proteins that serve as electron carriers in the respiratory chain are not symmetrically oriented with respect to the two sides of the inner mitochondrial membrane, nor do they react in the same way with respect to the matrix and the intermembrane space (Figure 20.15). Note that Figure 20.15 repeats the information found in Figure 20.8, with the addition of the flow of protons. The number of protons transported by respiratory complexes is uncertain and even a matter of some controversy. 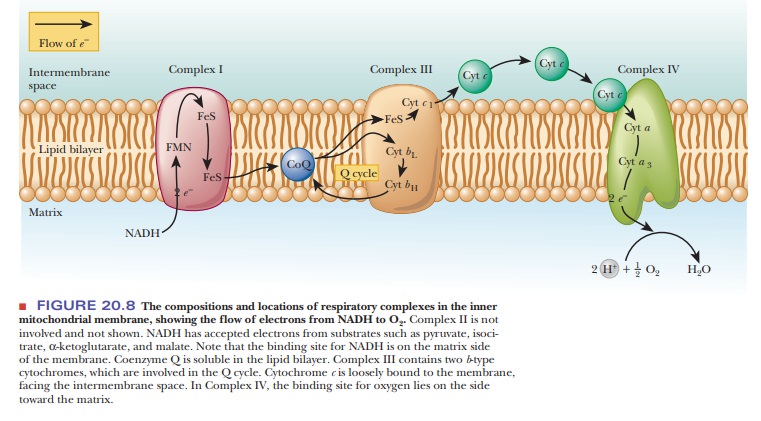 Since chemiosmotic coupling was first suggested by the British scientist Peter Mitchell in 1961, a considerable body of experimental evidence has accumu-lated to support it.

·           A system with definite inside and outside compartments (closed vesicles) is essential for oxidative phosphorylation. The process does not occur in soluble preparations or in membrane fragments without compartmentalization.

·           Submitochondrial preparations that contain closed vesicles can be prepared; such vesicles can carry out oxidative phosphorylation, and the asymmetrical orientation of the respiratory complexes with respect to the membrane can be demonstrated (Figure 20.16).

·           A model system for oxidative phosphorylation can be constructed with proton pumping in the absence of electron transport. The model system consists of reconstituted membrane vesicles, mitochondrial ATP synthase, and a proton pump. The pump is bacteriorhodopsin, a protein found in the membrane of halobacteria. The proton pumping takes place when the protein is illuminated (Figure 20.17). 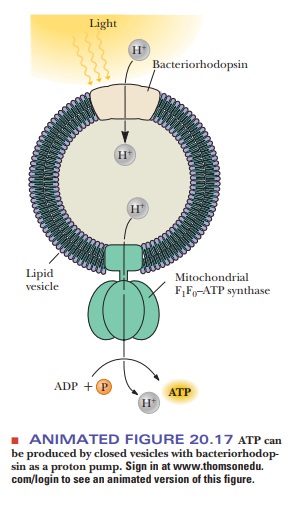 ·           The existence of the pH gradient has been demonstrated and confirmed experimentally.

The way in which the proton gradient leads to the production of ATP depends on ion channels through the inner mitochondrial membrane; these channels are a feature of the structure of ATP synthase. Protons flow back into the matrix through ion channels in the ATP synthase; the F0 part of the pro-tein is the proton channel. The flow of protons is accompanied by formation of ATP, which takes place in the F1 unit (Figure 20.18). The unique feature of chemiosmotic coupling is the direct linkage of the proton gradient to the phosphorylation reaction. The details of the way in which phosphorylation takes place as a result of the linkage to the proton gradient are not explicitly specified in this mechanism. 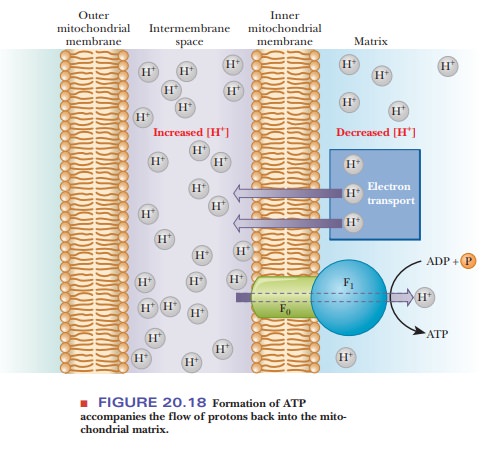 A reasonable mode of action for uncouplers can be proposed in light of the existence of a proton gradient. Dinitrophenol is an acid; its conjugate base, dinitrophenolate anion, is the actual uncoupler because it can react with pro-tons in the intermembrane space, reducing the difference in proton concentra-tion between the two sides of the inner mitochondrial membrane.

The antibiotic uncouplers, such as gramicidin A and valinomycin, are iono-phores, creating a channel through which ions such as H+, K+, and Na+canpass through the membrane. The proton gradient is overcome, resulting in the uncoupling of oxidation and phosphorylation.

What Is conformational coupling?

In conformational coupling, the proton gradient is indirectly related to ATP production. The proton gradient leads to conformational changes in a number of proteins, particularly in the ATP synthase itself. Recent evidence appears to show that the proton gradient is involved in the release of tightly bound ATP from the synthase as a result of the conformational change (Figure 20.19). There are three sites for substrate on the synthase and three possible conformational states: open (O), with low affinity for substrate; loose-binding (L), which is not catalytically active; and tight-binding (T), which is catalytically active. At any given time, each site is in one of three different conformational states. These states interconvert as a result of the proton flux through the synthase. ATP already formed by the synthase is bound at a site in the T conformation, while ADP and Pi bind at a site in the L conformation. A proton flux converts the site in the T conformation to the O conformation, releasing the ATP. The site at which ADP and Pi are bound assumes the T conformation, which can then give rise to ATP. More recently, it has been shown that the F1 portion of ATP synthase acts as a rotary motor. The c, γ, and ε subunits constitute the rotor, turning within a stationary barrel of a domain consisting of the subunit in association with the α3β3 hexamer and the a and b subunits (refer to Figure 20.13 for a detailed picture of the subunits). The γ and ε subunits constitute the rotating “shaft” that mediates the energy exchange between the proton flow at F0 and ATP synthesis at F1. 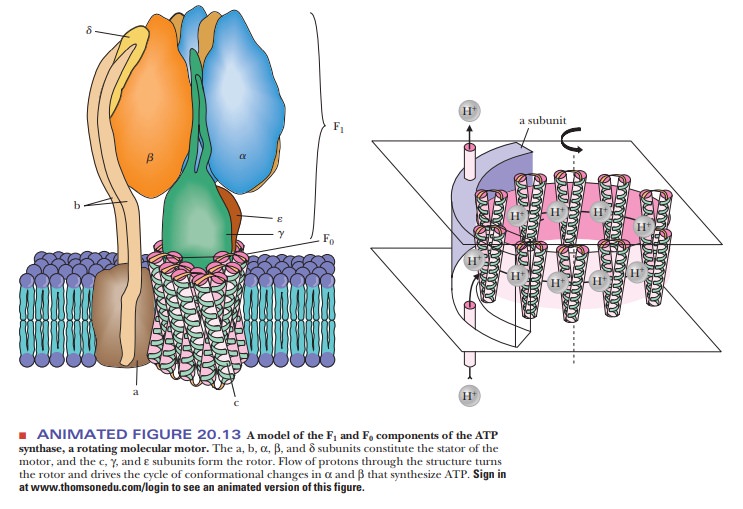 Electron micrographs have shown that the conformation of the inner mito-chondrial membrane and cristae is distinctly different in the resting and active states. It is well established that the shape of mitochondria is not static. This evidence long supported the idea that conformational changes play a role in the coupling of oxidation and phosphorylation.

In chemiosmotic coupling, the proton gradient is the crux of the mat-ter. The flow of protons through a pore in the synthase drives ATP production.

In conformational coupling, a change in the shape of the synthase releases bound ATP that has already been formed.