We have before us two hypotheses concerned with the nature of intelligence, and the way we’ve described the hypotheses points toward the means of deciding which hypothesis is correct.

We have before us two hypotheses concerned with the nature of intelligence, and the way we’ve described the hypotheses points toward the means of deciding which hypothesis is correct. What we need to do is take a closer look at the IQ tests them-selves and try to find patterns within the test scores. This kind of scrutiny reflects the psychometric approach to intelligence—an approach that, at the start, deliberatelyholds theory and definitions to the side. Instead, it begins with the actual test results and proceeds on the belief that patterns within these results may be our best guide in deciding what the tests measure—and therefore what intelligence is. To see how this works, let’s begin with a hypothetical example.

Imagine that we give a group of individuals three tests that seem at least initially dif-ferent from each other; let’s call the tests X, Y, and Z. One hypothesis is that all three tests measure the same underlying ability—and so, if a person has a lot of this ability, she has what she needs for all three tests and will do well on all of them. (This is, of course, the idea that there’s a general ability used for many different tasks.) Based on this hypothesis, a person’s score on one of these tests should be similar to her score on the other tests because, whatever the level of ability happens to be, it’s the same ability that matters for all three tests. This hypothesis therefore leads to a prediction that there will be a strong correlation between each person’s score on test X and his or her score on test Y, and the same goes for X and Z or for Y and Z.

A different hypothesis is that each of tests X, Y, and Z measures a different abil-ity. This is, of course, the idea that there’s no such thing as ability in general; instead, each person has their own collection of more specialized capacities. Based on this view, it’s possible for a person to have the ability needed for X but not the abilities needed for Y or Z. It’s also possible for a person to have the abilities needed for both Y and Z but not those needed for X . It’s possible for a person to have all of these abilities or none of them. In short, all combinations are possible because we’re talking about three separate abilities; thus, there is no reason to expect a cor-relation between someone’s X score and his Y score, or between his Y score and his Z score, just as there’s no reason to expect a correlation between, say, someone’s ability to knit well and the size of his vocabulary. Knitting and knowing a lot of words are simply independent capacities—so you can be good at one, or the other, or both, or neither. 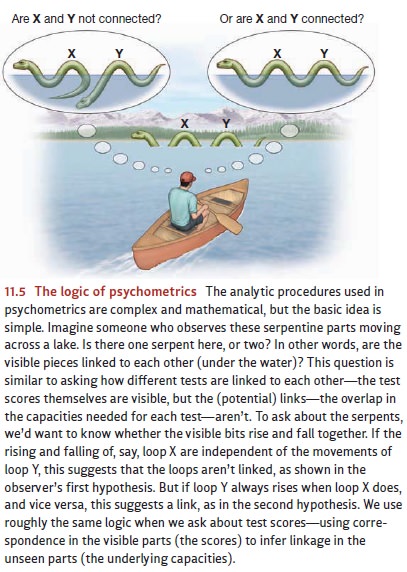 require, then they are to some extent measuring the same thing; so there should be a cor-relation between the scores on the two tests. If the overlap is slight, the correlation will be weak; if the overlap is greater, the correlation will be correspondingly stronger. (For a slightly different—and somewhat whimsical—view of these points, see Figure 11.5.)