In  1904,  the  French  minister  of  public  instruction  appointed  a  committee  with  the specific  task  of  identifying  children  who  were  performing  badly  in  school  and  would benefit  from  remedial  education.  One  member  of  this  committee,  Alfred  Binet (1857–1911; Figure 11.1), played a pivotal role and had an extremely optimistic view of the project. As Binet saw things, the committee’s goal was both to identify the weaker stu- dents and then—crucially—to improve the students’ performance through training. For  their  task, Binet  and  the  other  committee  members  needed  an  objective  way  to assess each child’s abilities, and in designing their test, they were guided by the belief that intelligence is a capacity that matters for many aspects of cognitive functioning. This view led them to construct a test that included a broad range of tasks varying in content and difficulty: copying a drawing, repeating a string of digits, understanding a story, arithmetic reasoning, and so on. They realized that someone might do well on one or two of these tasks just by luck or due to some specific experience (perhaps theperson had encountered that story before), but they were convinced that only a trulyintelligent  person  would  do  well  on  all  the  tasks  in  the  test. Therefore, intelligencecould be measured by a composite score that took all the tasks into account. Moreover,they believed that the diversity of  the tasks ensured that the test was not measuringsome specialized talent but was instead a measure of ability in general.Indeed, Binet put a heavy emphasis on this diversity, and even claimedthat, “It matters very little what the tests are so long as they are numer-ous”.

In its original form, the intelligence test was intended only for chil-dren. The test score was computed as a ratio between the child’s “mentalage” (the level of development reflected in the test performance) and hischronological age; the ratio was then multiplied by 100 to get the finalscore (Figure 11.2). This ratio (or quotient) was the source of  the test’sname: The test evaluated the child’s “intelligence quotient,” or IQ.

Other,  more  recent  forms  of  the  test  no  longer  calculate  a  ratiobetween mental and chronological age, but they’re still called IQ tests.One  commonly  used  test  for  assessing  children  is  the  WechslerIntelligence Scale for Children (WISC), released in its fourth revisionin 2003 (Wechsler, 2003). Adult intelligence is often evaluated with the Wechsler Adult Intelligence Scale (WAIS); its fourth edition was released in 2008. Like Binet’s original test, these modern tests rely on numerous sub-tests. In the WAIS-IV, for example, there are verbal tests to assess general knowledge, vocabulary, and comprehension; a perceptual-reasoning scale includes visual puzzles like the one shown in Figure 11.3. Separate subtests assess working memory and speed of intellectual processing. 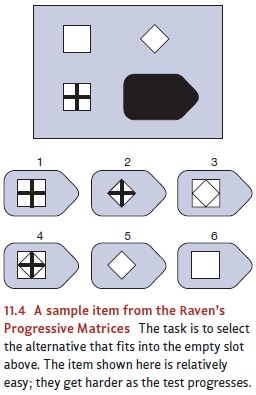 Other intelligence tests have different formats. For example, the Raven’s Progressive Matrices test (Figure 11.4) contains no subtests and hinges entirely on someone’s ability to analyze figures and detect patterns. Specifically, this test presents the test taker with a series of grids (these are the matrices), and she must select an option that sensibly completes the pattern in each grid. This test is designed to minimize any influence from verbal skills or back-ground knowledge.

Did Binet (and all who came after him) succeed in his aim of creating a test that trulymeasures intelligence? To find out, we need to evaluate the tests’ reliability and validity. As we described there, reliability refers tohow consistent a measure is in its results and is often evaluated by assessing test-retestreliability.  This assessment boils down to a simple question: If we give the test, wait awhile, and then give it again, do we get essentially the same outcome?

Even so, if someone stays in a relatively stable and healthy environment, IQ tests are quite reliable. What about validity? This is the crucial evaluation of whether the tests really meas- ure what we intend them to measure, and one way to approach this issue is to assess its predictive validity: If the tests truly measure intelligence, then someone’s score on the test should allow us to predict how well that person will do in settings that require intelligence. And here, too, the results are promising. For example, there’s roughly a !.50 correlation between someone’s IQ and subsequent measures of academic per- formance (e.g., grade-point average; e.g., Kuncel, Hezlett, & Ones, 2004; P. Sackett, Borneman, & Connelly, 2008). This is obviously not a perfect correlation, because we can easily find lower-IQ students who do well in school, and higher-IQ students who do poorly. Still, this correlation is strong enough to indicate that IQ scores do allow us to make predictions about academic success—as they should, if the scores are valid. Hunter, 1998, 2004; P. Sackett et al., 2008). Sensibly, though, IQ matters more for some jobs than for others. Jobs of low complex-ity require relatively little intelligence; so, not surprisingly, the cor-relation between IQ and job performance is small (although still positive) for such jobs. Thus, for example, there’s a correlation of roughly .20 between IQ and someone’s performance on an assem-bly line. As jobs become more complex, intelligence matters more, so the correlation between IQ and performance gets stronger (Gottfredson, 1997b). Thus we find correlations between .5 and .6 when we look at IQ scores and people’s success as accountants or shop managers.

Still other results also confirm the importance of IQ scores and make it clear that, if we measure someone’s IQ at a relatively early age, we can use that measure to predict many aspects of her life to come. For example, people with higher IQ scores tend, overall, to earn more money during their lifetime, to end up in higher-pres-tige careers, and even to live longer. Likewise, higher-IQ individuals are less likely to die in automobile accidents (Table 11.1) and less likely to have difficulty following a doctor’s instructions. (For a glimpse of this broad data pattern, see Deary & Derr, 2005; Gottfredson, 2004; Kuncel et al., 2004; Lubinski, 2004; C. Murray, 1998.)

We should emphasize that, as with the correlation between IQ and grades, all of these correlations between IQ and life outcomes are appreciably lower than !1.00. This reflects the simple fact that there are exceptions to the pattern we’re describing— and so some low-IQ people end up in high-prestige jobs, and some high-IQ people end up unsuccessful in life (with lousy jobs, low salaries, and a short life expectancy). These exceptions remind us that (of course) intelligence is just one of the factors influencing life outcomes—and so, inevitably, the correlation between IQ and life success isn’t perfect. Nonetheless, there’s still a strong statistical linkage between IQ scores and important life outcomes, making it clear that IQ tests do measure something interesting and consequential.