A Hierarchical Model of Intelligence

Spearman realized, however, that g is not the sole determinant of test performance.

A Hierarchical Model of Intelligence

Spearman realized, however, that g is not the sole determinant of test performance (e.g., Spearman, 1927). Instead, he argued, each subtest depends both on g and on some other abilities that are specific to that particular subtest. Thus, performance on an arithmetic subtest depends on how much g a person has and also on the strength of that person’s (more specialized) numerical skills; performance on vocabulary tests depends on the combination of g and the person’s verbal skill; and so on. This pattern would explain both why the scores on all the subtests are correlated (because all the subtests rely on g, and so all reflect whether the person has a lot of g or a little) and why the correlations aren’t perfect (because performance on each subtest also depends on specialized abilities).

More recent studies have supported Spearman’s claim and have also illuminated what the more specialized abilities might be. One specialized ability involves verbal and linguistic skill, and so someone who has a lot of this ability will do well on almost any task that hinges on language skills. A second specialized ability involves quantitative or numerical ability; a third involves spatial or mechanical ability. On this basis, we can think of intellectual performance as having a hierarchical structure as shown in Figure 11.6. Researchers disagree about the details of this hierarchy; but by most accounts, g is at the top of the hierarchy and contributes to virtually all tasks. At the next level down are the abilities we just described—language, quantitative, and spatial—and, according to some authors, several more besides (including a specialized ability for fast-paced mental tasks, a specialized ability to learn new mate-rials, and so on). Then at the next level are a large number of even more specific capacities—at least 80 have been identified—each useful for a narrow and special-ized set of tasks (J. Carroll, 1993; W. Johnson, Nijenhuis, & Bouchard, 2007; McGrew, 2009; R . Snow, 1994, 1996). 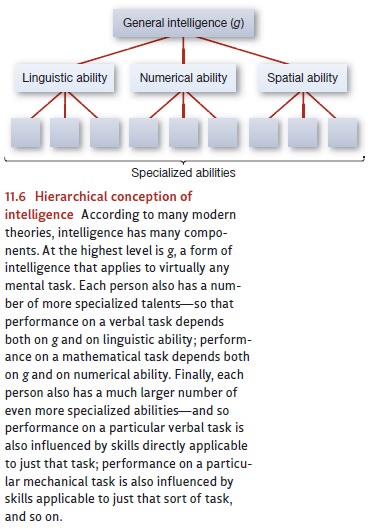 This hierarchical conception leads to a number of predictions that have been confirmed by psychometric research. Specifically, if we choose tasks from two different categories—say, a verbal task and a task requiring arithmetic—we should expect to find a correlation in performance because, no matter how different these tasks seem, they do have something in common: They both draw on g. If we choose tasks from the same category, though—say, two verbal tasks, or two quantitative tasks—we should expect to find a higher correlation because these tasks have two things in common: They both draw on g, and they both draw on the more specialized capacity needed for that category. The data confirm both of these predictions—moder- ately strong correlations among all of the IQ test’s subtests, and even stronger correlations among subtests in the same category.

So where does this leave us regarding the two hypotheses we intro-duced earlier? One hypothesis, initially offered by Binet, is that intelli-gence is a general skill, useful for all endeavors. The other proposal is that there are multiple forms of intelligence, each useful for a particular type of task. We now see that both suggestions are correct. Each person has some amount of g, and he draws on that capacity in virtually everything he does. As a result, there is consistency in someone’s performance—an overall level of achievement shaped by the person’s g. But the consis-tency isn’t perfect, because mental tasks also require more specialized abilities—and each person has each of these to some extent. This is why, in addition to the overall level of con-sistency, each person has his own profile of strengths and weaknesses, things he does relatively well and things he does less well.