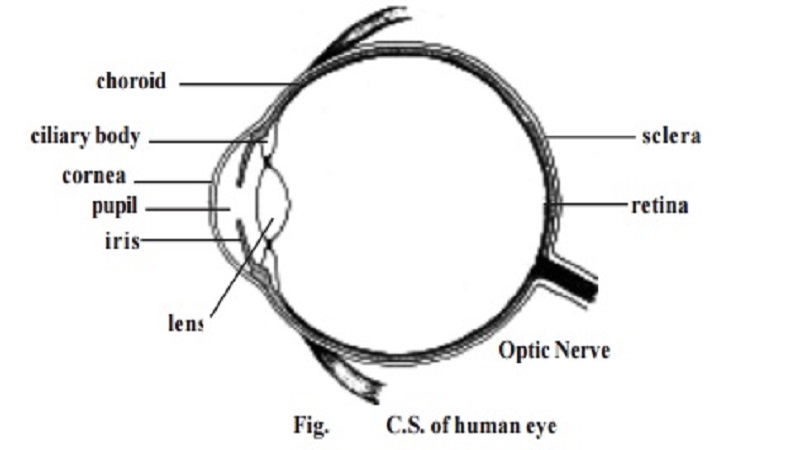 Living organism respond to several stimuli such as light, heat, sound, chemicals, pressure, touch, stretch and orientation. These stimuli are felt by specific receptors. The receptors convert the stimuli into impulses in the nervous systems.

The touch receptors in the skin are the simplest receptors. Such receptors are single nerve cells responding directly to the stimulus. Other re-ceptors are complex sense organs. On these organs the stimulus is chan-nelled into a receptive region of the organ. Among the several organs, the most important are the eyes and ears.

The eye is formed of 3 coats or tunics.

The sclera is the white outer layer of the eye. It covers posterior five-sixths of the eye. This firm layer provides shape and protects the internal structures. A small region of the sclera can be seen as the 'white of the eye'.

In the front, the outer layer forms a transparent region called the cor-nea. It permits entry of light. The cornea is made up of a connective tissuehaving collagen, elastic fibres and proteoglycans.

The iris is the coloured part of the eye. It may be black, brown or blue. It is a contractile structure surrounding an opening called the pupil. Light enters the eye through the pupil. The iris regulates such entry by con-trolling the size of the pupil.

The inner most tunic of the eye is the retina. It consists of an outer pigmented retina and an inner sensory retina. The sensory retina is lightsensitive. It contains nearly 120 million photoreceptor cells called rods and another 7 million cones.

The posterior compartment of the eye is much larger and it contains a transparent jellylike substance called vitreous humor.

The eye lens is an unique biological structure. It is transparent and biconvex. It is made up of long columnar epithelial cells called lens fibres. These fibres have an accumulation of proteins called crystallines. The lens is placed between the two eye compartments by suspensory ligaments.

The functioning of the eye is aided by accessory structures. They include the eyebrows, eyelids, conjunctiva and lacrimal apparatus.

The eyebrows prevent the sweat during perspiration from running down into the eye. They help to shade the eyes from direct sunlight.

The eyelids and associated lashes protect the eyes from foreign ob-jects. The medial region where the eyelids join has a small reddish-pink mound called the caruncle. It contains modified sebaceous and sweat glands. There are two or three rows of hairs attached to the free edges of eyelids. Modified sweat glands called the ciliary glands open into the follicles of the eyelashes. It keeps them lubricated. The inner margin of the eyelids contain Melbomianglands. These glands produce sebum for lubricating the eyelids.

The inner surface of the eyelids and the anterior surfae of the eye are covered by a thin, transparent mucous membrane called the conjunctiva.

The lacrymal glands or tear glands are situated in the superolateral corner of the eye orbit. They produce tear at the rate of about 1 ml / day. It helps to moisten the eye surface and wash away foreign substances. At the corners of the eye there are small openings called the puncta. Each punctuminturn opens into a lacrymal canaliculus. The lacrimal canaliculi open into a lacrimal sac. This sac enters into a nasolacrimal duct which opens into the inferior nasal concha. These ducts help to drain the excess tear. The entire organization related to 'tear' is called the lacrymal apparatus.