It seems reasonable that half the single bacterial chromosome should be replicated by a single replication region traversing the chromosome in about one doubling time.

It seems reasonable that half the single bacterial chromosome should be replicated by a single replication region traversing the chromosome in about one doubling time. If such a replication region does not contain multiple points of DNA elongation, then the speed of DNA chain elon-gation must be on the order of 1,000 nucleotides per second to replicate the chromosome’s 3 × 106 bases in a typical doubling time for rapidly growing bacteria of 30 minutes. Measuring such a rate is very difficult, but fortunately it is possible to reduce its value by about a factor of 5 by growing the cells at 20° instead of 37°, the temperature of most rapid growth.

If radioactive DNA precursors are added to the cell growth medium and growth is stopped soon thereafter, the total amount of radioactivity, T, incorporated into DNA equals the product of four factors: a constantrelated to the specific activity of the label, the number of growing chains, the elongation rate of a chain, and the time of radioactive labeling T =c×N× R × t. Similarly, the total amount of radioactivity incorpo-rated into the ends of elongating chains, E, equals the product of two factors: the same constant related to the specific activity and the number of elongating chains E=c×N. The ratio of T to E yields

Determination of the T radioactivity is straightforward, but determi-nation of the end radioactivity is not so obvious. Furthermore, careful experimentation would be required so that losses from either T or E samples do not introduce errors. These problems can be solved by digesting the DNA extracted from the labeled cells with a nuclease that cleaves so as to leave a phosphate on the 3’ position of the deoxyribose. After the digestion, the terminal deoxyribose from the elongating chain lacks a phosphate, whereas the internal deoxyriboses all possess  phos-phate groups (Fig. 3.15). Hence separation and quantitation of the radioactive nucleosides and nucleotides in a single sample prepared from cells following a short administration of the four radioactive DNA precursors yield the desired T and E values. 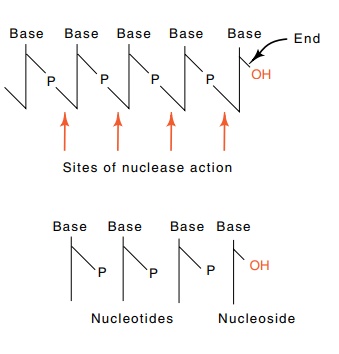 If the elongation rate is several hundred bases per second, then one second of synthesis will label several hundred bases, and a separation of nucleosides and nucleotides will then need to be better than one part in several hundred. Also, it is difficult to add label suddenly and then to stop the cells’ DNA synthesis quickly. Finally, the specific activity of intracellular nucleoside triphosphate pools does not immediately jump to the same specific activity as the label added to the medium. Fortu-nately the effect of a changing specific activity can be simply accounted for by taking a series of samples for analysis at different times after the addition of radioactive label.

The sample from the first point that could be taken from the cells after the addition of radioactive label possessed little radioactivity. It had counts of 17-20 cpm in ends and 2-20 × 105 cpm in total DNA. Samples taken later possessed greater amounts of radioactivity. This experiment yielded elongation rates of 140-250 bases/sec in cells with a doubling time of 150 minutes. This corresponds to a rate of 400 to 800 bases/sec in cells growing at 37° with a doubling time of 45 minutes. Therefore, only about two elongation points exist per replication region. The effects on this type of measurement of discontinuous DNA replica-tion on the lagging strand are left as a problem for the reader.

The primary conclusion that should be drawn from the direct meas-urement of the DNA elongation rate is that a small number of enzyme molecules are involved. The cell does not utilize an extensive factory with many active DNA polymerase molecules in a growing region. What happens when cells grow at 37° but at different growth rates due to the presence of different growth media?