It has been possible to construct artificial yeast chromosomes by com-bining isolated centromeres, telomeres, and autonomously replicating sequences known as ARS sequences.

It has been possible to construct artificial yeast chromosomes by com-bining isolated centromeres, telomeres, and autonomously replicating sequences known as ARS sequences. Although ARS sequences function in the artificial chromosomes, it is interesting to know whether they also normally function as origins. A gel electrophoresis technique based on the Southern transfer technology as described permits examination of this question.

Experiments have shown that ordinarily gel electrophoresis separates DNA according to molecular weight. If, however, the voltage gradient is increased five-fold above normal to about 5 V/cm, and higher than normal concentrations of agarose are used, then the separation becomes largely based on shape of the DNA molecules rather than their total molecular weight. Normal electrophoresis and this shape-sensitive electrophoresis can be combined in a two dimensional electrophoretic separation technique that is particularly useful in the analysis of replication origins. The DNA fragments necessary for the analysis are generated by cleaving DNA extracted from cells with restriction enzymes. These cut at specific sequences, and will be discussed. A DNA sample obtained by cutting chromosomal DNA with such a restriction enzyme is first separated according to size by electrophoresis in one direction. Then it is separated according to shape by electrophoresis in a direction perpendicular to the first. After the electrophoresis, the locations of the fragments containing the sequence in question are determined by Southern transfer. 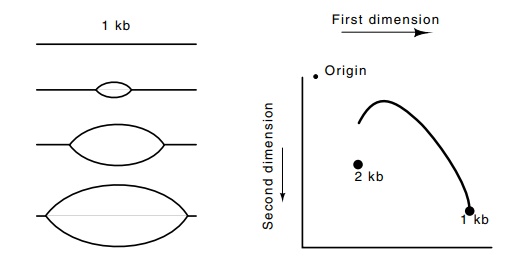 If the region of DNA we are considering contains a replication origin, quite a different pattern is generated. Suppose the origin is exactly in the middle of the region. Then the various replication forms are as shown in Fig. 3.20 and the pattern that will be found after Southern transfer is as shown. It is left as a problem to deduce the pattern expected if the origin is located to one side of the center of the DNA segment.