The bacterial DNA polymerases I and III, but not the eukaryotic DNA polymerases, as they are commonly purified, possess the ability to correct mistakes immediately upon misincorporation of a nucleoside triphosphate.

Cells also possess the ability to correct replication mistakes that have eluded the editing activity of the polymerases. Enzymes recognize mispaired bases and excise them. The gap thus produced is filled in by DNA polymerase I, or in eukaryotic cells by DNA polymerase β, and sealed with DNA ligase. At first glance, such a repair mechanism would not seem to have much value. Half the time it would correct the nucleotide from the incorrect strand. How can the cell restrict its repair to the newly synthesized strand? The answer is that DNA repair enzymes 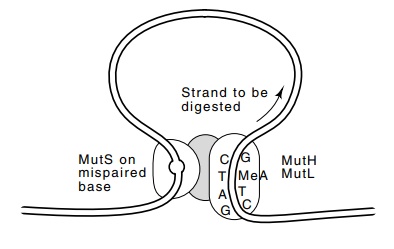 Figure 3.8 The interaction of MutS at a mispaired base with MutH and MutLactivates resynthesis of the newly synthesized daughter strand from the GATC sequence past the mispaired base.

distinguish old from new DNA strands with methyl groups. Only after a newly synthesized strand has been around for some time does it become methylated and thereby identified as “old.” By this means the repair enzymes can tell which of the strands should be repaired. Since the methyl groups involved are not densely spaced along the DNA, the repair enzymes find the mispaired bases by binding at appropriate sites and moving along the DNA to the mispaired base, all the while keeping track of which strand is parental and which is the newly synthesized daughter that should be corrected. In Escherichia coli, the ages of strands are identified by the attachment of methyl groups to the ade-nines of the sequence GATC.

At least one class of mismatched bases that may exist in Escherichiacoli following DNA replication is detected by the MutS protein. Thisprotein binds directly to the mismatched base (Fig. 3.8). Two other proteins of the Mut system, MutH and MutL, bind to the hemimethy-lated GATC sequence. Apparently, MutH, MutL, and MutS then interact, generating a nick at the GATC site on the unmethylated strand. The unmethylated daughter strand is digested from this point and resynthe-sized by nick translation past the mispaired base, thereby correctly repairing the original mismatch.

The information stored in the DNA can also be compromised by damage that occurs subsequent to synthesis. For example, DNA can be alkylated by chemicals in the environment. As a number of positions in DNA may be alkylated, a number of proteins exist for removing these groups. This class of repair system was discovered by the observation that prior exposure of cells to low concentrations of the mutagen nitrosoguanidine, which alkylates DNA, greatly reduced the lethality and mutagenicity caused by subsequent exposure to higher concentra-tions of the agent. This shows that resistance was induced by the first exposure. Furthermore, the resistance could not be induced in the presence of protein synthesis inhibitors, also showing that synthesis of a protein had to be induced to provide resistance.

Additional investigation of the alkylation repair system has shown that E. coli normally contains about 20 molecules of a protein that can remove methyl groups from O6-methylguanine. The protein transfers the methyl group from DNA to itself, thereby committing suicide, and at the same time generating a conformational change so that the protein induces more synthesis of itself. The methylated protein acts as a transcription activator of the gene coding for itself. Another domain of this same protein can transfer methyl groups from methyl phosphotri-ester groups on the DNA. Additional proteins exist for removal of other adducts.

Ultraviolet light can also damage DNA. One of the major chemical products of UV irradiation is cyclobutane pyrimidine dimers formed between adjacent pyrimidines, for example between thymine and thymine as shown in Fig. 3.9. These structures inhibit transcription and replication and must be removed. The UvrA, UvrB, and UvrC gene products perform this task in E. coli. In humans, defects in analogs of these enzymes lead to a condition called Xeroderma pigmentosum, which produces unusual sensitivity to sunlight.

The repair process for UV damaged DNA requires making nicks in the damaged DNA strand flanking the lesion, removing the damaged section, and repair synthesis to fill in the gap. Exposure to UV has long been known to generate mutations. Although the repair process itself could be inaccurate and generate the mutations, the actual situation is a bit more complicated. It appears that the existence of the damaged DNA turns off at least one of the normal error correction pathways. Thus mutations accumulate, even in portions of chromosomes not damaged by irradiation, if somewhere in the cell there exists damaged DNA. Ordinarily, pol III utilizes its 3’-5’ exonuclease activity to correct mis-paired bases, but RecA protein can turn off this repair activity. Appar - ently, RecA protein binds to a damaged site in the DNA, and as replication passes the point, the protein binds to the polymerase. The bound RecA then inhibits the normal 3’-5’ exonuclease activity of the enzyme. Perhaps the relaxation of the fidelity of pol III helps the enzyme replicate past sites of UV damage. On the other hand, it is possible that the cell merely utilizes the opportunity of excessive DNA damage to 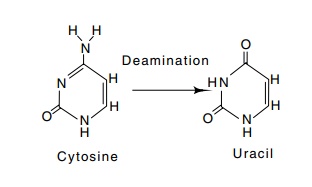 Simple chemical degradation can also compromise the information stored in DNA. The amino group on cytosine is not absolutely stable. Consequently, it can spontaneously deaminate to leave uracil (Fig. 3.10). DNA replication past such a point would then convert the former G-C base pair to an A-T base pair in one of the daughters because uracil has

the base-pairing properties of thymine. Enzymes exist to repair deami-nated cytosine. The first enzyme of the pathway is a uracil-DNA glycosi-dase that removes the uracil base, leaving the deoxyribose and phosphodiester backbone. Then the deoxyribose is removed and the resulting gap in the phosphodiester backbone is filled in. The fact that deaminated cytosine can be recognized as alien may be the reason thymine rather than uracil is used in DNA. If uracil were a natural component, cytosine deaminations could not be detected and corrected.

An interesting example demonstrates the efficiency of the deami-nated cytosine repair system. As mentioned above, some cells methylate bases found in particular sequences. In E. coli one such sequence is CCAGG, which is methylated on the second C. Should this cytosine deaminate, its extra methyl group blocks the action of the uracil-DNA glycosidase. As a result, spontaneous deamination at this position cannot be repaired. Indeed, this nucleotide has been found to be at least ten times as susceptible to spontaneous mutation as adjacent cytosine residues.