Use of a purified enzyme is one requirement for careful study of DNA synthesis. In the early days of molecular biology, important experiments by Kornberg demonstrated the existence in cell extracts of an enzyme that could incorporate nucleoside triphosphates into a DNA chain.

Use of a purified enzyme is one requirement for careful study of DNA synthesis. In the early days of molecular biology, important experiments by Kornberg demonstrated the existence in cell extracts of an enzyme that could incorporate nucleoside triphosphates into a DNA chain. This enzymatic activity could be purified from bacterial extracts, and the resultant enzyme was available for biochemical studies. Naturally, the first question to be asked with such an enzyme was whether it utilized a complementary DNA strand to direct the incorporation of the nucleo-tides into the elongating strand via Watson-Crick base-pairing rules. Fortunately the answer was yes. As this enzyme, DNA pol I, was more carefully studied, however, some of its properties appeared to make it unlikely that the enzyme synthesized the majority of the cellular DNA.

Cairns tried to demonstrate that pol I was not the key replication enzyme by isolating a bacterial mutant lacking the enzyme. Of course, if the mutant could not survive, his efforts would have yielded nothing. Remarkably, however, he found a mutant with much less than normal activity. Such a result appeared to prove that cells must possess other DNA-synthesizing enzymes, but until a mutant could be found com-pletely lacking DNA pol I, the demonstration was not complete.

Another way to show the existence of the DNA polymerases other than DNA pol I is to detect and purify them biochemically. Previously such attempts had proved futile because DNA pol I masked the presence of other polymerases. Once Cairns’s mutant was available, however, it was a matter of straightforward biochemistry to examine bacterial extracts for the presence of additional DNA-polymerizing enzymes. Two more such enzymes were found: DNA pol II and DNA pol III. 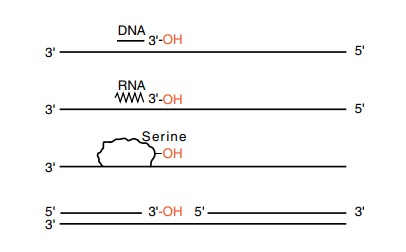 None of the three polymerases is capable of initiating DNA synthesis on a template strand. They are able to elongate growing polynucleotide chains, but they cannot initiate synthesis of a chain. This inability is not surprising, however, because initiation must be carefully regulated and could be expected to involve a number of other proteins that would not be necessary for elongation. For initiation, all three polymerases require the presence of a hydroxyl group in the correct position. The hydroxyl group can derive from a short stretch of DNA or RNA annealed to one strand, from cleavage of a DNA duplex, or even from a protein, in which the hydroxyl utilized is on a serine or threonine residue (Fig. 3.4).

The Okazaki fragments from which the lagging strand is built have been found to be initiated by a short stretch of RNA. This can be demonstrated by slowing elongation by growing cells at 14°. To maxi-mize the fraction of radioactive label in newly synthesized Okazaki fragments, the DNA is labeled with radioactive thymidine for only fifteen seconds. Then it is extracted, denatured, and separated according to density by equilibrium centrifugation in CsCl. RNA is more dense than DNA in such gradients, and the ten to fifteen ribonucleotides at the end of the Okazaki fragments somewhat increase their density. Diges-tion with RNAse or alkali removes the RNA and the density of the fragments shifts to that of normal DNA. Therefore, one function of the replication machinery is to lay down the RNA primers of the Okazaki fragments. This activity is called primase.

Figure 3.5 Conversion of elongating Okazaki fragments to a completed chainby the dissociation of DNA pol III, nick translation through the RNA by DNA pol I and sealing by DNA ligase.

In bacteria, DNA pol III is the main DNA replication enzyme. DNA pol I fills in the gaps in lagging strand synthesis and assists during repair of damaged DNA. No function is known for DNA pol II. Both DNA pol I and DNA pol III possess the 3’-to-5’ exonuclease activity that is necessary for proofreading removal of misincorporated nucleotides.

DNA pol I also possesses a 5’-to-3’ exonuclease activity not found in the other polymerases. This activity permits pol I to bind to a nick in the DNA, remove the nucleotide on the 3’ side, incorporate a nucleotide on the 5’ side and perform this process over and over again without dissociating from the DNA after each nucleotide. Thus pol I can proc-essively translate a nick down the DNA in the 5’-to-3’ direction. This process is used to remove the RNA that primes synthesis of the Okazaki fragments (Fig. 3.5). When pol III reaches such a primer it dissociates from the DNA. Then DNA pol I can bind and nick translate through the stretch of RNA. DNA pol I is less processive than DNA pol III, so that when pol I dissociates at some point after nick translating through the RNA primer, the resulting DNA-DNA nick can be sealed by DNA ligase. This ends the elongation process for this Okazaki fragment.

The two exonuclease activities and the polymerizing activity of DNA pol I reside on the single polypeptide chain of the enzyme. DNA pol III is not so simple. Two slightly different forms of the enzyme appear to function as a dimer, one which synthesizes the leading strand, and one which synthesizes the lagging strand. Most likely the complete complex, the holoenzyme, actually consists of at least nine different polypeptide chains. The α subunit possesses the polymerizing activity, and the ε subunit contains the 3’-5’ exonuclease activity. The unit of α, ε, and θ forms an active core that is capable of synthesizing short stretches of DNA. Remaining associated with the template strand and being highly processive is conferred by the complex of γ, δ, δ’, χ, and ψ which facilitate the addition of a dimer of β. The dimer of β encircles the DNA and forces the complex to remain associated with the same DNA molecule through-out the replication cycle.

Not surprisingly, eukaryotic cells also possess multiple DNA polym - erases which contain multiple subunits. These polymerases, not the subunits, often are named α, β, γ , δ, and ε. The α polymerase was long thought to be the general polymerizing enzyme, with the small β enzyme considered to be a repair enzyme. The γ enzyme is mitochondrial. We now know that α is likely to initiate synthesis on both the leading and lagging strands since only it possesses priming activity. Further elonga-tion on the leading strand is performed by δ, and on the lagging strand by ε or α. The β enzyme could complete the lagging strands by filling the same role as is played by DNA pol I in bacteria.