Helmstetter and Cooper have provided an explanation for the problem of maintaining a strain of Escherichia coli cells in balanced growth despite a difference between the cellular division time and the chromo-some replication time.

Helmstetter and Cooper have provided an explanation for the problem of maintaining a strain of Escherichia coli cells in balanced growth despite a difference between the cellular division time and the chromo-some replication time. Even though other strains and organisms may differ in the details of their regulation mechanisms, the model is of great value because it summarizes a large body of data and provides a clear understanding of ways in which cell division and DNA replication can be kept in step.

The model applies most closely to cells growing with a doubling time less than 1 hour. One statement of the model is that a cell will divide I + C + D minutes after the start of synthesis of an initiator substance, which is DnaA protein itself. I can be thought of as the time required for the I protein to accumulate to a level such that replication can initiate on all origins present in the cell. In our discussions, we will call this critical level 1. That is, when a full unit of I has accumulated, all chromosomes present in the cell initiate replication, a round of replications begins, and the I substance present at this time is consumed so that its accumulation begins again from a value of zero. 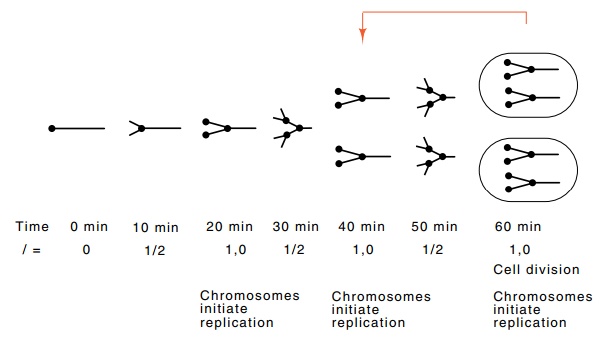 Figure 3.18 Application of the Helmstetter-Cooper model to cells with a dou-bling time of 20 minutes. At 60 minutes, cell division is possible and the resulting state of the cells is the same as cells shown at 40 minutes in the diagram.

C is the time required for complete synthesis of the chromosome. Itis independent of the growth rate of the cells as long as they grow at 37°, and it has a value of 40 minutes. D is a constant equal to 20 minutes. This is the time following completion of a round of DNA synthesis until the cell divides. It should be emphasized that in this model a cell must divide D minutes after completion of a round of DNA replication. D can be considered to be the time required for segregation of the daughter chromosomes into opposite ends of the cell and for growth of the septum that separates the cells.

To illustrate the model, we will consider cells growing with a doubling time of 20 minutes (Fig. 3.18). For convenience, consider the bidirec-tional replication of the cell’s circular chromosome to be abstracted to a forked line. We use a dot to represent the replication fork, and we encircle the chromosome to represent cell division. Since the model is stable, analysis of a cell division cycle can begin from a point not in a normal division cycle, and continued application of the model’s rules should ultimately yield the states of cells growing with the appropriate doubling times.

We begin in Fig. 3.18 from a point at which replication of a chromo-some has just begun and the value of I is zero. After 10 minutes, the chromosome is one-quarter replicated, and I=1⁄2. At 20, 40, and 60 minutes after the start of replication, full units of 1 have accumulated, new rounds of replication begin from all the origins present, and the chromosomes become multiforked. The first cell division can occur at 60 minutes after the start of replication, and divisions occur at 20-min-ute intervals thereafter. The DNA configuration and quantity of I present in cells just after division at 60 minutes is the same as in cells at 40 minutes. Therefore the cell cycle in this medium begins at 40 minutes and ends at 60 minutes. This means that zero-age cells in this medium possess two half-replicated chromosomes.

How can the multiple origins which exist within rapidly growing cells all initiate at precisely the same instant, or do they initiate at the same instant? A related question is what keeps an origin of replication from being reused immediately after it has initiated a round of synthesis? The answer is known in general terms, and could well apply to the analogous problems in eukaryotic cells. We know that a sizeable number of DnaA protein molecules are required to initiate replication from an origin. This large number makes the reaction critically dependent upon the concentration of DnaA. When it is a little too low, there is a very low probability of initiation, but the moment the critical concentration is reached, initiation can occur. Then, to keep the origin from being used again, it is promptly buried in the membrane. The signal for burying is that it be half methylated. Before initiation, both strands of the origin are methylated on the multiple GATC sequences contained in bacterial origins. After initiation, the new daughter strand is not methylated, and the hemimethylated DNA is bound to the membrane and therefore inaccessible to the initiation machinery. On a time scale of ten minutes or so, the newly synthesized strand becomes methylated and the origin is released from the membrane. In the meantime, either the level of DnaA or some other critical component has been reduced, and the origin is in no danger of firing again until the proper time.