The size, shape, grading of aggregate and their surface moisture affect directly the workability and strength of concrete whereas soundness, alkali-aggregate reaction and presence of deleterious substances adversely affect the soundness and durability of concrete. The following tests are conducted to ensure satisfactory performance of aggregate

The size, shape, grading of aggregate and their surface moisture affect directly the workability and strength of concrete whereas soundness, alkali-aggregate reaction and presence of deleterious substances adversely affect the soundness and durability of concrete. The following tests are conducted to ensure satisfactory performance of aggregate 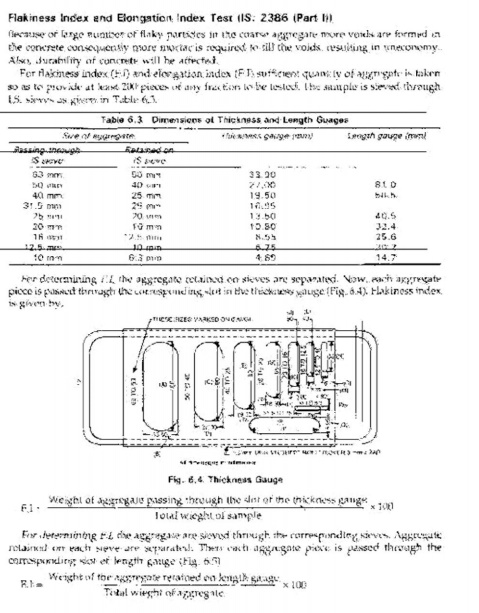 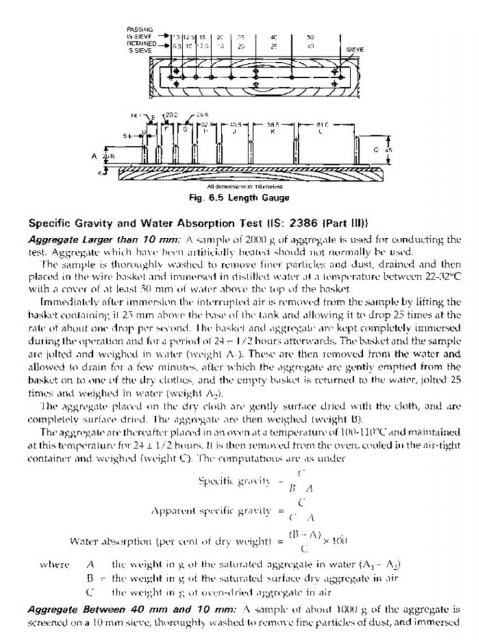 For testing fine aggregate for clay, fine silt and dust weight approximately 300g of the air dried sample, passing the 4.75 mm IS sieve, and place it in the screw-topped glass jar, together with 300 ml of diluted sodium oxalate solution. The jar is then rotated about its long axis (with this axis horizontal) at a speed of 80 rpm for 15 minutes. The suspension is then poured into 1000 ml measuring cylinder and the residue washed by gentle swirling and decantation of successive 150 ml portions of sodium oxalate solution, the washings being added to the cylinder until the volume is made up to 1000 ml.

For coarse aggregate the sample is placed in a suitable container, covered with a measured volume of sodium oxalate solution (0.8 g/l), agitated vigorously and the liquid suspension transferred to the 1000 ml measuring cylinder. The process is repeated until all clayey material is transferred to the cylinder. The volume is made upto 1000 ml with sodium oxalate solution.

The percentage of fine clay, silt and dust, A, is

V = volume of the pepette (ml)

0.8 = weight of sodium oxalate (g) in one litre of the dilute solution.

Note: These impurities should not exceed 3% for fine and coarse aggregates except for crushed

Aggregate Smaller than 10 mm: A Pycnometer shown in Fig. 37 is used for specific gravity. A sample about 1000 g for 10 mm to 4.75 mm or 500 g if mm, is placed in the tray and covered with distilled water at a temperature of 22-32 o C. Soon after immersion, air entrapped in or bubbles on the surface of the aggregate are removed by gentle agitation The sample is kept immersed for 24 ± 1/2 hours. 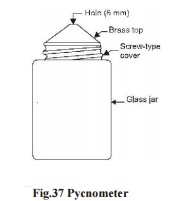 The water is then carefully drained from the sample through a filter paper, retained being returned to the sample. The aggregate including any solid on the filter paper should be exposed to a gentle current of warm air to evaporate surface moisture and stirred at frequent intervals to insure uniform drying until no free surface moisture can be seen and the material just attains a free-running condition. The saturated and surface-dry sample is weighted ( weight A).

The aggregate is then placed in the pycnometer which is filled with distilled water. The pycnometer is dried on the outside and weighed (weight B).

The contents of the pycnometer are emptied into the tray. The pycnometer is refilled with distilled water to same level as before, dried on the outside and weighed (weight C).

The water is then carefully drained from the sample by decantation through a filter paper and any material retained is returned to the sample. The sample is placed in the oven at a temperature of 100 to 110 o C for 24 ± 1/2 hours, during which period it shou ld be stirred occasionally to facilitate drying. It is then cooled in the air-tight container and weighed (weight D).

The field method of determination of bulking is explained in Sec. 6.3. In the laboratory test sufficient quantity of oven dried sand is filled in graduated cylinder up to a certain fixed mark. The sand is emptied in a container and the weigh of dry sand is determined 1% water is added in the sand mixed thoroughly and filled in the graduated cylinder. The volume of sand will be found to increase. The process is repeated by increasing the percentage of water in steps of 1% each time till a decrease in the volume of sand is observed. Still this addition of water is continued till the volume of sand comes back to the original volume (fully saturated).

A graph is plotted between moisture content and percentage increase in volume. The graph will be of the shape as shown in Fig. 6.2. The percentage bulking is given by,

The material for the test should consist of aggregate passing 12.5 mm sieve and retained on 10 mm sieve. For other sizes, the materials are separated on the appropriate sieves given in Table 6.6.

The aggregate is tested in a surface-dry condition. The weight of material comprising the test sample is determined (weight A).

The cylinder of the test apparatus is positioned on the base-plate and the test sample is added in thirds, each being subjected to 25 strokes from the tamping rod. The surface of the aggregate is carefully levelled and the plunger is inserted so that it rests horizontally on this surface.

The apparatus, with the test sample and plunger in position is then placed between the platens of the testing machine and loaded at an uniform rate as possible, so that the total load is reached in 10 minutes. The total load should be 400 kN.

The load is released and the whole of the material is removed from the cylinder and sieved on a 2.36 mm sieve for the standard test, or on the appropriate sieve given in Table 6.5. The fraction passing the sieve is weighed.

The ratio of the weight of fines formed to the total sample weight in each test is expressed as a percentage, recorded to the first decimal place:

B = weight of fraction passing the appropriate sieve

A = weight of surface-dry sample

The aggregate impact value gives a relative measure of the resistance of an aggregate to sudden shock or impact, which in some aggregate differs from its resistance to a slow compressive load.

The test sample consists of aggregate the whole of which passes a 12.5 mm sieve and is retained on a 10 mm sieve. The aggregate comprising the test sample is dried in an oven for a period of four hours at a temperature of 100-110 o C and cooled.

A cup, 102 mm internal diameter and 50 mm deep, is fixed firmly in position on the base of the machine and the whole of the sample is placed in it and compacted by a single tamping of 25 strokes of the tamping rod.

The hammer is raised until its lower face is 380 mm above the upper surface of the aggregate in the cup, and allowed to fall freely on to the aggregate. The test sample is subjected to a total of 15 such blows each being delivered at an interval of not less than one second.

The crushed aggregate is then removed from the cup and the whole of it is sieved on 2.36 mm IS sieve until no further significant amount passes in one minute. The fraction passing the sieve is weighed to an accuracy of 0.1 g (weight B). The fraction retained on the sieve is also weighed (weight C) and, if the total weight (B + C) is less than the initial weight (A) by more than one gram, the result is discarded and a fresh test made. Two tests are made.

The ratio of the weight of fines formed to the total sample weight in each test are expressed as a percentage, recorded to the first decimal place:

The abrasion value of coarse aggregate may be determined by either Deval Machine or by Los Angeles machine.

Abrasive Charge: The abrasive charge consists of 6 cast iron or steel spheres approximately 48 mm in diameter, each weighing between 390 and 445 g. An abrasive charge of 6 spheres weighing 2500 ± 10 g is used with each test sample.

The test sample consists of dry coarse aggregate made up of percentages of the various sizes conforming to one of the gradings shown in Table 6.7. The grading used should be that most nearly representing the coarse aggregate furnished for the work. 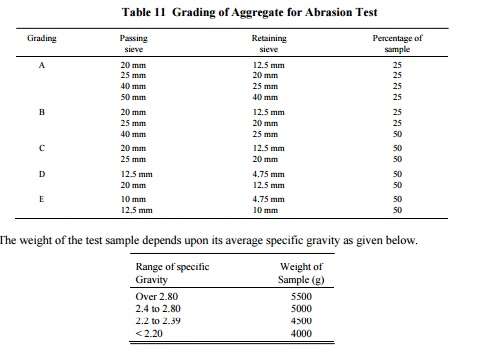 Procedure: The test sample and the abrasive charge are placed in the Deval abrasion testing machine and the machine is rotated for 10000 revolutions at a speed of 30 to 33 rev/min. At the completion of the test, the material is removed from machine and sieved on a 1.70 mm sieve. The material retained on the sieve is washed, dried and accurately weighed to the nearest gram.

A = percentage of uncrushed fragments

100 - A = percentage of crushed fragments

Abrasive Charge: The abrasive charge consists of cast iron spheres or steel spheres approximately 48 mm in diameter and each weighing between 390 and 445 g.

The abrasive charge, depending upon the grading of the test sample should be as given in Table 12.

The test sample consists of clean aggregate dried in an oven at 105 -110 o C to substantially constant weight.

Note: It is recognized that different specification limits may be required for gradings E, F and G than for A, B, C and D. It is urged that investigations be conducted to determine the relationship, if any, which exists between results for these coarse gradings using the 10000 g samples and the finer ones using the 5000 g samples.

The test sample and the abrasive charge is placed in the Los Angeles abrasion testing machine and the machine is rotated at a speed of 20 to 33 rev/min. For gradings A, B, C and D, the machine is rotated for 500 revolutions; for gradings E, F and G, it is rotated for 1000 revolutions. The machine is so driven and so counter-balanced as to maintain a substantially uniform peripheral speed. If an angle is used as the shelf, the machine is rotated in such a direction that the charge is caught on the outside surface of the angle. At the completion of the test, the material is discharged from the machine and a preliminary separation of the sample made on a sieve coarser than the 1.70 mm. The finer portion is then sieved on a 1.70 mm sieve.The material coarser than the 1.70 mm sieve is washed, dried in an oven at 105 -110 o C to a substantially constant weight, and accurately weighed to the nearest gram. The difference between the original and the final weights of the test sample expressed as a percentage of the original weight of the test sample gives the percentage of wear.

The sample of fine aggregate for the test is passed through 10-mm IS sieve and should be of such size that it yields not less than 100 g of each of the sizes as below.

From the sample of coarse aggregate, sizes finer than 4.75 mm are removed and the size of sample for different sizes should be as follows. 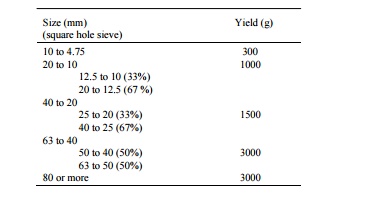 Quantitative examination: After the completion of final cycle the cooled sample is washed free from the sodium sulphate or magnesium sulphate with barium chloride. Each sample is dried to constant weight at 105 - 110 o C and weighed. Fine aggregate are sieved over the same sieve on which it was retained before the test, and coarse aggregate over the following sieves.

Qualitative examination: Frations of samples coarser than 20 mm are examined qualitatively for each immersion as well as at the completion of the test. The effects observed may be classed as disintegration, splitting, crumbling, cracking, flaking, etc.