Cement hydrates when water is added to it and cohesion and solidity is exhibited. It binds together the aggregates by adhesion. The strength of mortar and concrete depends upon the type and nature of cement. So, it should develop a minimum specified strength if it is to be used in structures. Cement is tested for compressive and tensile strengths.

Cement hydrates when water is added to it and cohesion and solidity is exhibited. It binds together the aggregates by adhesion. The strength of mortar and concrete depends upon the type and nature of cement. So, it should develop a minimum specified strength if it is to be used in structures. Cement is tested for compressive and tensile strengths.

Conditions Affecting Strength: Cement is very strong at early ages if a high lime or high alumina content is there. Gypsum and Plaster of Paris in small percentages also tend to increase the strength slightly, but when present in quantities larger then 3 per cent, these substances provide variable effects. The effect of the clinker compounds on strength have already been discussed. In addition to the effect of composition, the strength of cement is greatly influenced by the degree of burning, the fineness of grinding, and the aeration it receives subsequent to final grinding. An underburnt cement is likely to be deficient in strength.

Compressive Strength: Compressive strength is the basic data required for mix design. By this test, the quality and the quantity of concrete can be cotrolled and the degree of adulteration can be checked.

The test specimens are 70.6 mm cubes having face area of about 5000 sq. mm. Large size specimen cubes cannot be made since cement shrinks and cracks may develop. The temperature of water and test room should be 27 o ± 2 o C. A mixture of cement and standard sand in the proportion 1:3 by weight is mixed dry with a trowel for one minute and then with water until the mixture is of uniform colour. Three specimen cubes are prepared. The material for each cube is mixed separately. The quantities of cement, standard sand and water are 185 g, 555 g and (P/4) + 3.5, respectively where P = percentage of water required to produce a paste of standard consistency. The mould is filled completely with the cement paste and is placed on the vibration table. Vibrations are imparted for about 2 minutes at a speed of 12000±4 00 per minute.

The cubes are then removed from the moulds and submerged in clean fresh water and are taken out just prior to testing in a compression testing machine. Compressive strength is taken to be the average of the results of the three cubes. The load is applied starting from zero at a rate of 35 N/sq mm/minute. The compressive strength is calculated from the crushing load divided by the average area over which the load is applied.The result is expressed in N/mm2. The minimum specified strength for some of the cements is given in Table 5.4.

Importance: The tensile strength of cement affords quicker indications of defects in the cement than any other test. Also, the test is more conveniently made than the compressive strength test. Moreover, since the flexural strength, is directly related to the tensile strength this test is ideally fitted to give information both with regard to tensile and compressive strengths when the supply for material testing is small.

Briquette Method: A mixture of cement and sand is gauged in the proportion of 1:3 by weight. The percentage of water to be used is calculated from the formula (P/5) + 2.5, where P = percentage of water required to produce a paste of standard consistency. The temperature of the water and the test room should be 27 o ± 2 o C. The mix is filled in the moulds of the shape shown in Fig. 5.11.

After filling the mould, an additional heap of mix is placed on the mould and is pushed down with the standard spatula, until the mixture is level with the top of the mould. This operation is repeated on the other side of the mould also. The briquettes in the mould are finished by smoothing the surface with the blade of a trowel. They are then kept for 24 hours at a temperature of 27 o ± 2 o C and in an atmosphere having 90 per cent humidity. The briquettes are then kept in clean fresh water and are taken out before testing. Six briquettes are tested and the average tensile strength is calculated. Load is applied steadily and uniformly, starting from zero and increasing at the rate of 0.7 N/sq mm of section in 12 seconds. 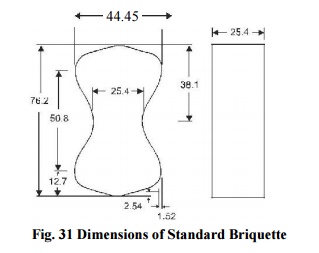 Notes: (i) In the tension test of cement the load on the briquette should be applied centrally. Since briquettes become brittle with age, the effect of slight eccentricity or any torsional strain is pronounced in long-time tests.

(ii)  The strength increases when the loading rate is increased from that specified.