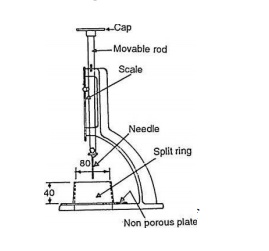 When water is added to cement, the resulting paste starts to stiffen and gain strength and lose the consistency simultaneously. The term setting implies solidification of the plastic cement paste. Initial and final setting times may be regarded as the two stiffening states of the cement.

When water is added to cement, the resulting paste starts to stiffen and gain strength and lose the consistency simultaneously. The term setting implies solidification of the plastic cement paste. Initial and final setting times may be regarded as the two stiffening states of the cement. The beginning of solidification, called the initial set, marks the point in time when the paste has become unworkable. The time taken to solidify completely marks the final set, which should not be too long in order to resume construction activity within a reasonable time after the placement of concrete. Vicat's apparatus used for the purpose is shown in Fig.. The initial setting time may be defined as the time taken by the paste to stiffen to such an extent that the Vicat's needle is not permitted to move down through the paste to within 5 ± 0.5 mm measured from the bottom of the mould. The final setting time is the time after which the paste becomes so hard that the angular attachment to the needle, under standard weight, fails to leave any mark on the hardened concrete. Initial and final setting times are the rheological properties of cement.

Importance: It is important to know the initial setting time, because of loss of useful properties of cement if the cement mortar or concrete is placed in moulds after this time. The importance of final setting time lies in the fact that the moulds can be removed after this time. The former defines the limit of handling and the latter defines the beginning of development of machanical strength.

Conditions Affecting Setting Time: The factors influencing the setting properties of cement are its composition, the percentage of retardant, degree of calcination, fineness of grinding, aeration subsequent to grinding clinker, percentage of water used to make cement paste, the temperature of the mixing water, cement and the atmosphere where the cement paste is placed, and the amount of manipulation the paste receives.The effect of lime, silica and alumina in controlling the set have been discussed in Sec. 5.3. The effect of gypsum is to increase the setting time of freshly ground cement. It is usually mixed with the clinker before final grinding, or just after the clinker has received preliminary grinding. The addition of gypsum before calcination causes it to decompose into lime and sulphur trioxide. Since the latter is liberated in the kiln, there is resulting effect on the setting time. Often, an underlimed cement becomes quick setting after seasoning. This can be avoided by adding to the cement 1 or 2 per cent of hydrated lime or the fraction of a per cent of Plaster of Paris. Setting time of cement is rapid with the increase in the fineness of cement. When the mixing water used in testing cement paste is increased by 1 per cent above that required for normal consistency, an increase of about 30 minutes or more is observed in the initial or final set.

Cements stored in warm rooms will, in general, be quick setting than those stored in cold places. Cold mixing water retards set while warm water accelerates it. Cement exposed to thoroughly saturated atmosphere will set much more slowly than those exposed to a dry atmosphere. If, however, a considerable proportion of moist CO2 is present in the air, the setting time is found to reduce greatly. By lengthening the time of mixing and by prolonged troweling of the surface mortars, it is also possible to considerably delay the setting time.

Test Procedure: A neat cement paste is prepared by gauging cement with 0.85 times the water required to give a paste of standard consistency. The stop watch is started at the instant water is added to the cement. The mould resting on a nonporous plate is filled completely with cement

paste and the surface of filled paste is levelled smooth with the top of the mould. The test is conducted at room temperature of 27± 2 o C. The mould with the cement paste is placed in the Vicat's

apparatus graduated scale is recorded. The procedure is repeated until the needle fails to pierce the block by about 5 mm measured from the bottom of the mould. The stop watch is pushed off and the time is recorded which gives the initial setting time.

The cement is considered to be finally set when upon applying the needle gently to the surface of test block, the needle makes an impression, but the attachment fails to do so.