That all cells normally go senescent implies that there is an internal clock that drives this phenomenon.

That all cells normally go senescent implies that there is an internal clock that drives this phenomenon. The clock alarm may be triggered early by mutant oncogenes, but usually the alarm goes off when the telomeres get dangerously short. Thus, normal human chromosomes have telomeres between 5 and 15 kb long, whereas senescent cells have telomeres 4 to 7 kb long. Telomeres are highly repetitive sequences at the ends of eukaryotic chromosomes that get shorter each time the chromosomes replicate. They are bound by proteins that protect the ends of the DNA from double-stranded break repair, which would fuse the ends of different chromosomes togetherâ€”a disastrous mistake.

In some cells, the enzyme telomerase repairs the shortened ends of the chromosome ( Fig. 20.4 ) by adding more repeats to the ends. It is particularly active in reproductive cells. Telomerase is a nontypical reverse transcriptase with two components, protein and RNA. The protein catalyzes the synthesis of new DNA, and the RNA acts as a template. 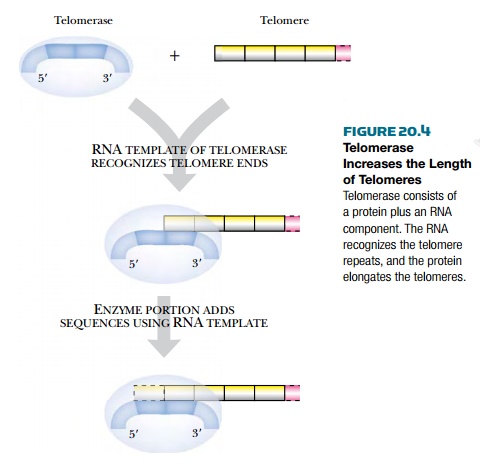 In most human cells, telomerase activity is very low, and so these cells are highly susceptible to senescence. In contrast, mice have significant telomerase activity in most cells and have much longer telomeres (approximately 40 to 60 kb). These differences are evident whencells are cultured. Mouse cell lines divide many more times before entering senescence and sometimes become immortal spontaneously. Mice have been engineered so as to delete the RNA component of telomerase. These mice appear normal for a few generations, although the telomeres shorten with each generation, because they can no longer be extended. At a critical point in telomere length, the mice begin to show chromosomal fusions, higher cellular senescence, and increased apoptosis. Thus, the mouse cells come to resemble human cells (which normally have shorter telomeres).

The human inherited disease dyskeratosis congenita (DKC) is linked to lower telomerase activity. People with DKC have blocked tear ducts, learning difficulties, pulmonary disease, graying and loss of hair, and osteoporosis, to name just a few of the problems. Interestingly, many of these are also symptoms of aging. The gene responsible for DKC encodes a protein that processes rRNA precursors in the nucleolus. In DKC patients the level of the RNA component of telomerase was much lower than normal and the telomeres were unusually short. Some of the symptoms of DKC are probably due to improper telomere length.

Telomere length is a critical issue in cancer also. Because cancer cells divide beyond the normal stopping point, their telomeres become extremely short. This contributes to the genetic instability associated with cancer. If a tumor progresses, its cells will eventually turn on telomerase activity, which restabilizes the genome. Of course, many rearrangements may have already occurred by then.