Life Span and Metabolism in Worms

The role of metabolism and nutrition in aging has been revealed by studying the nematode worm C. elegans , which normally lives for 2 to 3 weeks.

LIFE SPAN AND METABOLISM IN WORMS

The role of metabolism and nutrition in aging has been revealed by studying the nematode worm C. elegans , which normally lives for 2 to 3 weeks. Several mutations are known that increase the life span and/or the wormâ€™s entry into a type of hibernation called dauer ( Fig. 20.6 ). Normally these worms go through four larval stages before they become adults. When there is not enough food or water, a worm goes into the dauer stage. It produces a thicker cuticle to prevent dehydration and closes off its mouth and anus so it cannot eat. It does not feed or move until stimulated with more food or water. Some mutations in the genes daf-2 and age-1 cause the worms to enter the dauer stage. Many of these mutations are temperature sensitive , that is, the mutation is fully expressed only at higher temperature. Other daf-2 or age-1 mutations cause an increased life span, of up to 2 months, without inducing the dauer stage. 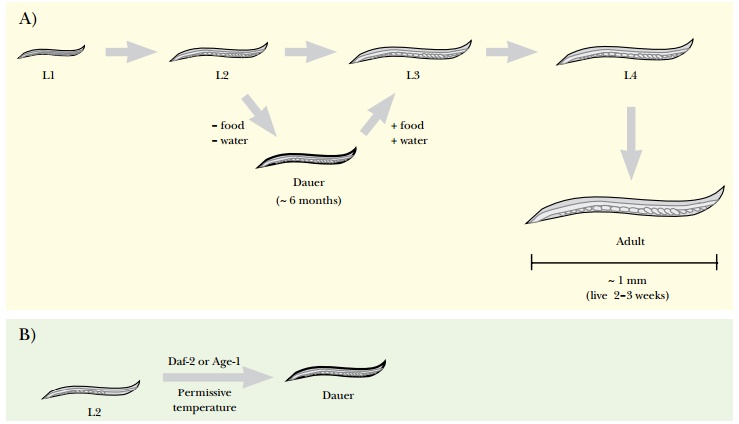 The Daf-2 and Age-1 proteins both regulate metabolic rate ( Fig. 20.7 ). According to sequence data, Age-1 encodes a worm homolog to the catalytic subunit of phosphatidylinositol-3-kinase (PI3K), and daf-2 encodes a homolog to the insulin receptor. The mammal homologs of these two proteins are involved in insulin signaling. When this pathway is impaired in humans, we develop type II diabetes (adult-onset). The worm mutations in daf-2 and age-1block the signal transmitted by the insulin-like receptor. By analogy with the human system, the worm mutations probably affect glucose levels, lower the metabolic rate, and hence extend life span. In support of this, daf-2 and age-1 worms show lower metabolic rates than wild-type and more resistance to oxidative damage. 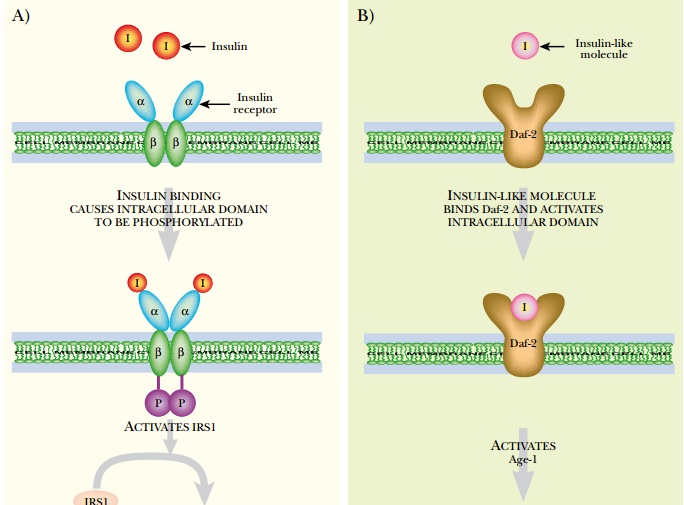 Another set of mutations in C. elegans also increases the average life span of the worm. These genes are called clk , for abnormal function of biological clocks, and gro , for growth rate abnormal. These mutations lengthen the time it takes for the worm to go through embryonic development and postembryonic development, ultimately increasing the life span. The whole developmental process is delayed. Unlike daf-2 and age-1 , mutations in clk or gro have absolutely no effect on dauer formation. The closest homolog of CLK-1 is a yeast protein that is involved in growth regulation and allows the cells to switch from a fermentable carbon source like glucose to a nonfermentable one. The yeast protein controls the synthesis of ubiquinone, an electron carrier involved in mitochondrial respiration. So, once again, the extension ofC. elegans life span boils down to an altered rate of metabolism. The mitochondria of clkmutants release smaller amounts of reactive oxygen metabolites, and aging is slowed.