Aging in yeast is affected by the Sir2 protein, a member of the sirtuin family of histone deacetylases. (Remember that eukaryotic gene expression involves remodeling of the nucleosomes, which in turn is affected by the level of histone acetylation.) Yeast cells that lack Sir2 have a longer chronological life span. They have a decreased rate of DNA mutation and increased resistance to stressful conditions such as heat shock and oxidative stress. The mammalian homolog to Sir2, SirT1, controls glucose and fat metabolism. Mammalian cells lacking the sirt1 gene survive longer in culture, and transgenic mice lacking this gene have lower body fat and live longer. Sir2 is thus implicated in the caloric restriction pathway discussed earlier. 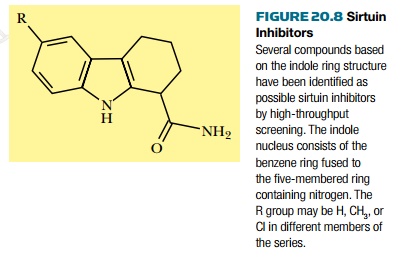 Inhibitors of sirtuins are being developed as possible anti-aging drugs. Indeed, one of the biotech companies involved is named Elixir Pharmaceuticals. They have developed a series of modified indoles as specific and potent sirtuin inhibitors ( Fig. 20.8 ). Sirtuins act by transferring the acetyl group from the histone to NAD, giving O -acetyl-ADP-ribose plus nicotinamide. The indolebased sirtuin inhibitors bind after the release of nicotinamide and prevent the release of the histone and the O -acetyl-ADP-ribose.