Activating CED-3 in C. elegans , and caspase-3 in humans commits the cell to apoptosis, which is executed by a caspase cascade.

Activating CED-3 in C. elegans , and caspase-3 in humans commits the cell to apoptosis, which is executed by a caspase cascade. One of the more famous targets is CAD , for caspase-activated DNase , a nuclease that cuts nuclear DNA between the nucleosomes ( Fig. 20.16 ). The fragments of DNA are about 180 base pairs in length, which is the length of DNA wound around a nucleosome. To determine if cells are in the process of apoptosis, scientists isolate the genomic DNA and look at the fragment sizes. If they are in multiples of approximately 200 base pairs, this implies the cells were going through apoptosis. There are many other substrates of caspases. Proteins that maintain nuclear structure are digested so that the nucleus shrinks and breaks into small pieces. The cytoskeleton is cleaved and the cell architecture disintegrates and compacts. Other organelles are digested so they lose their structure, which leads to the final result of small compact granules of cellular material called apoptotic bodies. 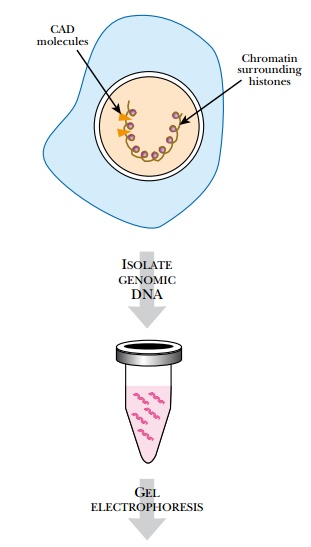 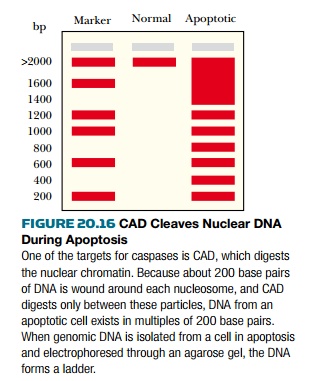