Links between Cancer and Aging

The third major factor that triggers cellular senescence is the presence of oncogenic mutations, that is, mutations that promote cancer.

LINKS BETWEEN CANCER AND AGING

The third major factor that triggers cellular senescence is the presence of oncogenic mutations, that is, mutations that promote cancer. To defend the organism, tainted cells sacrifice themselves by starting the genetic program for senescence or apoptosis, thus entering premature senescence . This brings us to the question of why cells have a deliberate senescence program. The most prevalent theory is simply to avoid cancer.

There are three key pieces of evidence for this theory. First, malignant tumors have cells that are immortal and grow indefinitely because they have bypassed the normal senescence program. Second, oncogenes that induce a normal cell to become malignant often bypass or block senescence, thus extending the life span of the cell. Third, loss of p53 or retinoblastoma protein (pRb) prevents a cell from entering senescence. Many cancers have mutations in one or both of these two proteins, which are both involved in control of the cell cycle. 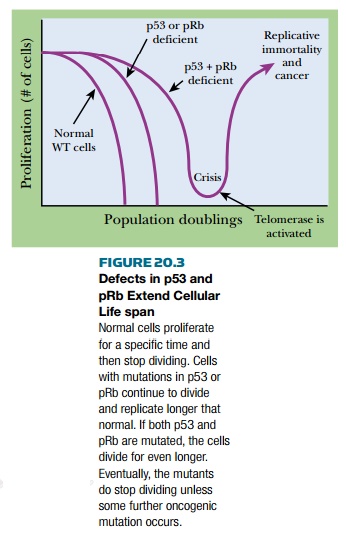 If either of p53 or pRb is defective, cells replicate for more cycles than usual ( Fig. 20.3 ). If cells are defective for both p53 and pRb, the effect is additive and the replicative life span is longer than with either mutation alone. Nonetheless, such double mutants do eventually enter senescence, after an extended number of cell divisions. Thus cells have other mechanisms to trigger senescence. The p53 and pRb proteins are also implicated as key regulators of cellular senescence because they are the targets for several viral oncogenes. p53 activates several cellular programs in response to stress, including cellular senescence, apoptosis, growth arrest, and DNA repair. Its expression is tightly regulated, because both a surplus and a shortage of p53 are detrimental. The p53 protein is a transcription factor that regulates its own gene as well as a variety of other genes. In particular p53 activates transcription of the genes for two other regulators, PUMA (p53-upregulated modulator of apoptosis) and SLUG. PUMA is a member of the Bcl-2 protein family that activates Bax, thus promoting apoptosis (see later section on Mammaliann Apoptosis). Conversely, SLUG protein blocks the transcription of PUMA and opposes apoptosis. Thus, the balance between PUMA and SLUG determines the choice between trying to save a damaged cell via growth arrest plus DNA repair or eliminating the cell via apoptosis. The role of p53 in the death or survival of a damaged cell is very complex and is still being investigated.