Comparison of the genome sequence of C. elegans with those of mice and humans has allowed the discovery of many mammalian genes that are homologs of worm apoptosis genes.

Comparison of the genome sequence of C. elegans with those of mice and humans has allowed the discovery of many mammalian genes that are homologs of worm apoptosis genes. Because apoptosis in humans occurs throughout development and adulthood, there are significantly more proteins and regulators associated with apoptosis than in nematode worms. There are more than 15 caspases with varied tissue specificity and functions. In addition, there are more than 20 mammalian proteins that are similar to CED-9. The precise roles of proteins involved in regulating mammalian apoptosis are still being elucidated. Mammalian cells have two major pathways to trigger apoptosis ( Fig. 20.12 ). These eventually converge on the caspases. One pathway is designated the death receptor pathway because the death signal originates at a cell surface receptor protein, or death receptor . An external signal molecule binds to the extracellular domain on the receptor. The receptor transmits the signal to its intracellular domain and then recruits a variety of internal proteins to the membrane. This ultimately activates the caspases.The other pathway is the mitochondrial death pathway . This is usually triggered by intracellular catastrophe, such as irreparable DNA damage. This activates proteins in the mitochondria, which release different effector molecules to activate the caspases. The death receptor pathway can function independently of the mitochondrial pathway, although both pathways are often activated simultaneously. The signal molecules that bind to the death receptor are quite varied, and the biological significance of most is still uncertain. The best understood is CD95, or Fas ligand ( Fig. 20.13 ). 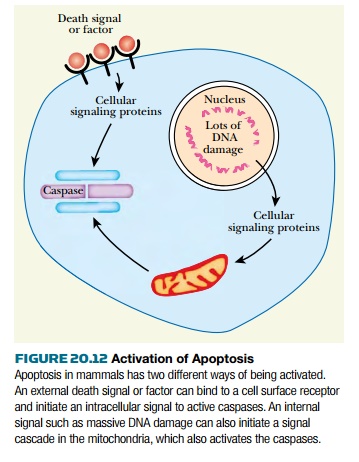 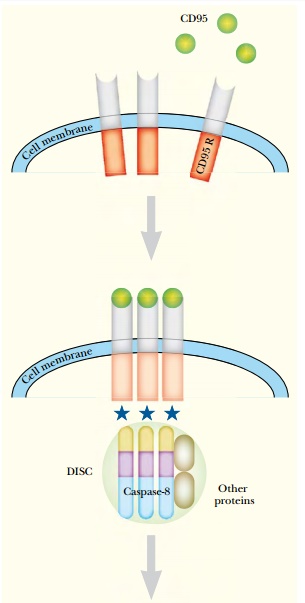 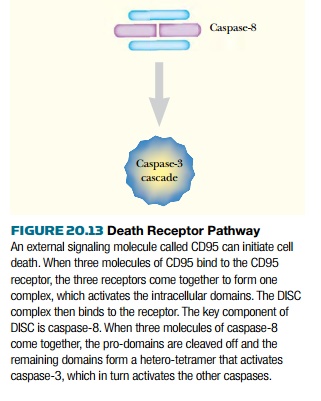 This is a highly glycosylated cell surface protein found in immune cells. When CD95 binds to its receptor on the target cell (the CD95 receptorâ€” CD95R), it causes the receptor to trimerize. The intracellular domain of each receptor is activated  by proximity to the others. Activated CD95R recruits a complex of proteins known as DISC ( death-inducing signaling complex ) to the cell membrane. One component of DISC is caspase-8, which cleaves its own pro-domain, releasing the active form . The main target for caspase-8 is caspase-3, the direct homolog of CED-3 in C. elegans . Once caspase-3 is activated in mammalian cells, there is no turning back. The cell will die via apoptosis. The mitochondrial pathway is usually activated by internal stimuli such as irreparable DNA damage. The signal converges on a family of mitochondrial proteins named after its founding member, Bcl-2 , first identified in a B-cell lymphoma. Bcl-2 is homologous to the C. elegans CED-9 protein. Unlike C. elegans , which has only a single protein of this class, mammals have a family of many proteins, some of which induce apoptosis, whereas others protect cells from apoptosis. The members of the Bcl-2 family are active as dimers, and the relative number of each protein in the dimer state controls the death pathway ( Fig. 20.14 ). Thus, if there are more dimers of Bcl-2, which is anti-apoptotic, then the cell will not die. If there are more dimers of Bax, a pro-apoptotic family member, then the cell dies. 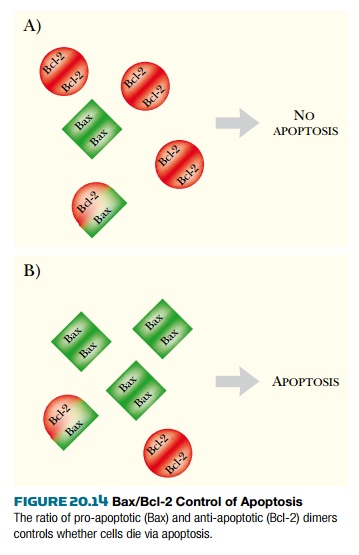 If a pro-apoptotic signal is received, the pro-apoptotic members of the Bcl/Bax family allow cytochrome c (cyt c ) to escape from the mitochondria through pores in its outer membrane ( Fig. 20.15 ). Once released, cyt c induces formation of the apoptosome , a signaling complex containing cyt c , caspase-9, and Apaf-1. Apaf-1 is the mammalian homolog to CED-4 ofC. elegans and caspase-9 corresponds to CED-3. However, whereas CED-4 is blocked by CED- 9, Apaf-1 has an auto-inhibitory domain that is part of the Apaf-1 protein itself. Furthermore, CED-4 forms a tetramer when activated but Apaf-1 forms a heptamer ( Fig. 20.15 ). The Apaf-1 heptamer in the apoptosome activates caspase-9, which in turn activates caspase-3 as in the death receptor pathway. 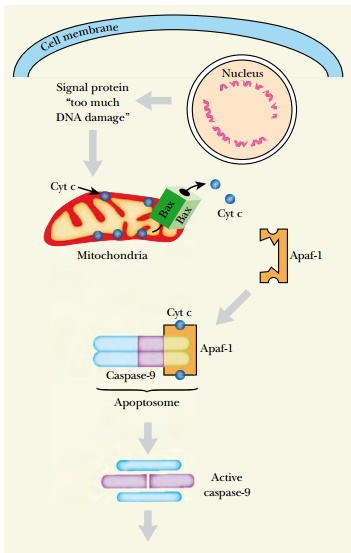 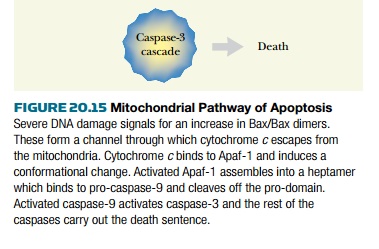